The wettability of leaves, i.e. the amount of water captured and retained on leaf surfaces differs significantly between plant species: as studied by so far all types of leaves can be found from completely wettable leaves that become covered by a film of water to virtually non-wettable leaves that bead water into small spherical droplets [1-7]. Leaf wettability is determined by the measurement of the contact angle θ between 5 μl water droplets applied to the leaf surface [8].

The aim of the present study was to find out the natural variability but particularly also extremes in leaf wettability and water droplet run off properties within a broad range of plant species. Leaf samples were taken out of divers habitats of three continents, at various elevations (186-5268 m) and from all major ecological zones yielding in total information on 792 leaf surfaces obtained on adaxial and abaxial leaf surfaces of 396 species out of 85 families [24,25].

The first study area was located in Asia, Nepal (80°04’-88°12’ E-26°22’-30°27’ N) extending from 186 m-5268 m (a.s.l.) within 150-200 km. Sampling was conducted along this extreme altitudinal gradient on plant species found within the tropical, subtropical, temperate, subalpine, alpine and nival region of Central and Western part of the country [24]. The Southern slopes of the Himalaya are humid as they fall within the monsoon system of the Indian subcontinents; the Northern slopes of the Himalaya are semi-arid.

A total number of 396 plant species (for detail see supplementary material) from 85 families were surveyed. Only fully developed and healthy looking leaf samples were taken. Measurements were made both on adaxial and abaxial leaf surfaces of twenty leaves per species in Nepal and ten per species in Austria and also in Chile. Random sampling was conducted on dominant plant species during the main growth period (Himalaya: November 2006 until August 2007, Austrian Alps: June-July 2006, Chilean Andes: January 2007 and February 2008).

Photographic digital images of 5 μl water droplets deposited on leaf surface were taken by the integrated digital camera of the drop shape analyser (DSA1, Krüss, Hamburg, Germany) or for Chilean species and in remote sites in Nepal by a digital camera with a macro function (Canon, Power Shot A710IS). The digital photographs were further processed with the software of the DSA100 (DSA1, Krüss, Hamburg, Germany). In preliminary tests images of water droplets on leaves of the same species were taken with the two cameras. When processed with the DSA100 similar contact angles θ were determined.

The criteria for judging leaf surface wettability were based on various earlier reports [8,14,22,26-31]. In the current study the following terminology is used (Figure 1): If contact angles were between 27°-40°, leaf surfaces are termed extreme-hydrophilic, between 40°-90° highly wettable and between 90°-110° wettable. If θ-values exceeded 110° the leaves are classified as being non-wettable. Highly non-wettable leaves have surfaces with water droplet contact angles greater than 130°. The term superhydrophobic is used for leaf surfaces with θ-values greater than 150°. 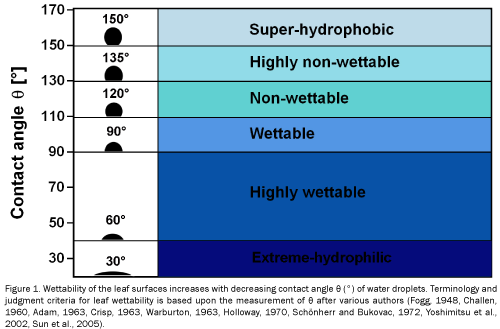 Run off angles (tendency to retain water droplet on leaf surface) were determined by the goniometer method of Brewer and Smith [5]. Leaves were collected from growing sites and run off angle measurements were recorded on the same day at the field site. Leaves were taped to a horizontal metal plate that was fixed to a goniometer (R&A Rost, Viennia). A 50 μl water droplet which is the recommended standard volume was then deposited on the initially horizontal leaf surface by a micropipette (SGC, Australia Pvt. Ltd., Melbourne) [32]. The leaf inclination was then successively increased and the angle at which the water droplet first began to move was recorded. Ten replicates were taken. Slight angles of inclination <5° indicate a slippery surface where water droplets run off very easily without leaving any residue, while high values (>10°) indicate a sticky leaf surface [10]. Additionally, the presence or absence of trichomes was determined by naked eyed.

The significance of differences of means of leaf wettability and run-off angles were evaluated by ANOVA and the Bonferroni post-hoc test using SPSS software (SPSS Inc., Chicago, IL, USA).

Leaf wettability measured on 792 surfaces of 396 species collected at various elevations (186 m- 5268 m) on three continents differed significantly. Contact angle θ ranged between an absolute minimum of 16.7° and an absolute maximum of 169.7° (Figure 2). Remarkably in species that were found to show extreme surface properties concerning leaf wettability, i.e. that were either super-hydrophobic or extreme-hydrophilic, variation in θ was lowest. Similarly the frequency distribution of the leaf wettability classes indicates that 72.6% of the species investigated show extreme surface properties (Figure 3), being either highly wettable or extreme-hydrophilic (37.8%) or highly non-wettable or super-hydrophobic (34.8%). 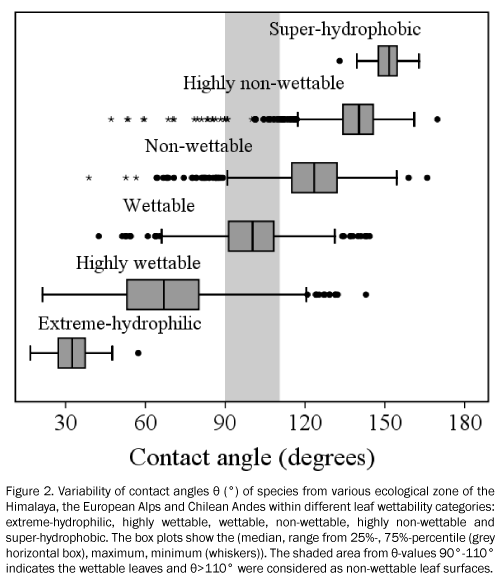 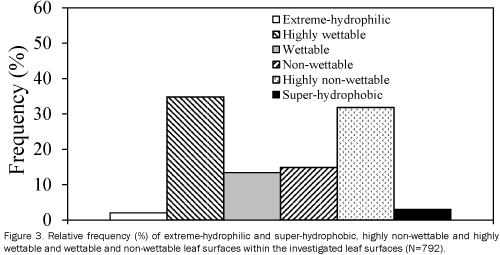 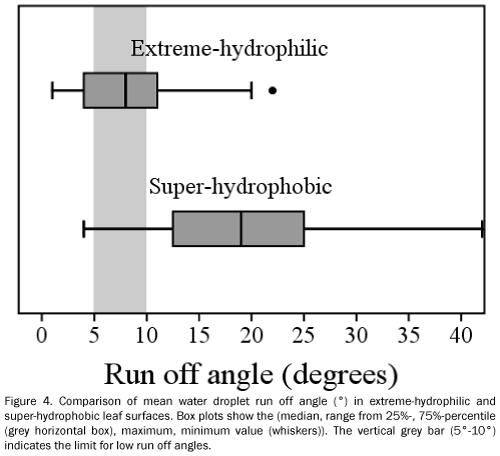 Thirteen families out of 85 were selected where we had sampled a representative number of at least 10 species (Figure 4). Significant differences in leaf wettability between these families were observed. Highly non-wettable to super-hydrophobic families were the Oxalidaceae and Fabaceae, highly wettable to extreme-hydrophilic were Ericaceae and Moraceae. Several families comprised all wettability types, e.g. Asteraceae and Euphorbiaceae. 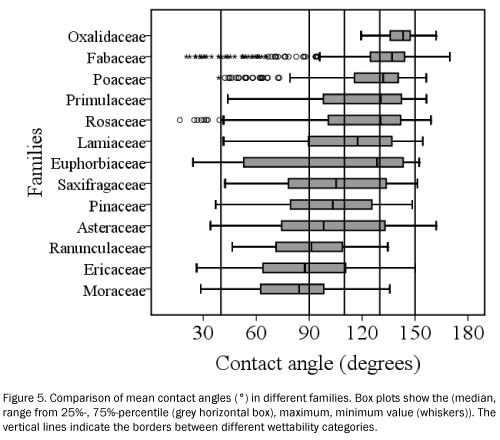 Fourty leaf surfaces (5.1%) out of 792 tested were found to show super-hydrophobic (24) or extreme-hydrophilic (16) properties. Our leaf wettability results show a representative cross section from low to high wettability. However, the values obtained for each single species may not mirror the potential maximum or extreme as intra-specific differences in leaf wettability indicate environmental adaptability [6,25,33]. For instance, it has been shown that species from open places possess a lower wettability than species from the understorey [5,24,34,35]. Plants from wet environments had more wettable leaf surfaces than plants from dry environments and generally leaf wettability decreased with increasing elevation [6,24]. From this it can be expected that by alteration of the growth conditions also the wettability properties can be significantly changed and hence the leaf surface characteristics of the encountered species can be expected to be improvable with respect to quality under optimum growth conditions.

Among the super-hydrophobic surfaces (θ ± 150°) three were found on leaves of Aconogonum molle, Iris decora, and Oxalis latifolia that additionally had a run off angle ±10°, i.e. fulfilling the criteria for a super-hyrdophobic self-cleaning surface (in sensu: [17,21, 22] ). While in A. molle and O. latifolia leaf surface properties are influenced by trichomes, I. decora is glabrous and surface wettability characteristics are solely affected by the structural peculiarities of the cuticle and epidermal outer cell wall. Hence, this species appears to be particularly promising with respect to self-cleaning properties (Supplementary Tables 6-10). 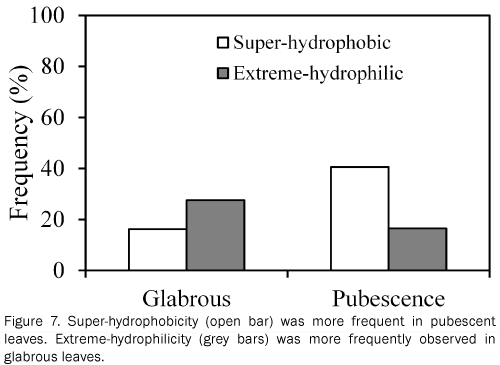 The self-cleaning effect of the leaves of N. nucifera (θ=160.4°) was explained by a wax crystal covered leaf surface and very rough papillose epidermal cells that provide hydrophobicity but also greatly influence the motion of moving water droplets [10]. Lotus like behaviour has been observed on other biological surfaces, silver ragwort, and also in the wings of insects, especially those with large wings, which cannot be cleaned by legs, have water repellent wing surfaces and exhibit self-cleaning ability [36,37]. In the latter case, not only the removal of particles is of interest, but also the maintenance of flight capability.

Sixteen extreme-hydrophilic (θ=27-40°) leaf surfaces were detected. Four of them were adaxial and exhibited particularly low run off angles: Castanopsis indica (1.8 ± 0.7°), Cassia fistula (4.2 ± 0.7°), Lantana camara (4.1 ± 0.6°) and (2.7 ± 0.5°). Except for C. indica, the species have glabrous leaves. In these species water droplets spread very quickly but water runs off the leaves at very low inclinations with considerable speed which may be important for the removal of deposited particles from the leaf surface. In contrast to super-hydrophobic surfaces on these leaves the water droplet has good contact with the surface and hence potentially touches and cleans a more expanded stripe on the leaf surface. Already earlier low contact angles combined with low sliding angles were presumed to be responsible for the removal of micro-organisms, i.e. to have surface cleaning properties [38]. By contrast Barthlott and Neinhuis considered only water repellent surfaces to be keystones in the self-cleaning mechanism [10].

Pubescence was found to promote hydrophobicity. Similar results were observed by Brewer et al. that trichomes decrease leaf wettability significantly but this effect depends additionally strongly on the presence or absence of wax crystals on the trichomes [3,33]. Non-waxy trichomes were only water repellent for a short time while waxy trichomes were extremely water repellent. Additionally trichome morphology can affect hydrophobicity Koch et al. [21]. Pubescence seems additionally to slow down water droplet run off.

This research was funded by FWF-Austria (P17188-B03) and by the OeAD scholarship to Biva Aryal (41/2 EZA/2005). We are indebted to Lavinia di Piazza for technical assistance. Tirtha Pant is thanked for excellent field guiding in Nepal, Lohengrin Cavieres and Angela Sierra-Almeida for cooperation and logistic support in the Chilean Andes.