A Brief Review on Nanoparticles: Types of Platforms, Biological Synthesis and Applications

Nanotechnology refers to the engineering and exploitation of materials whose size ranges from 1-100 nm. There are several types of nanoparticles platforms which are differentiated based on their size, shape, composition and their functionalities. These platforms include liposomes, Albumin-bound, Polymeric, Quantum Dots and Iron Oxide. Biological method for the synthesis of nanoparticles is easy, cost-effective and environmental friendly. Biological systems have the capabilities of converting metal ions into metal nanoparticles in a very friendly manner. Nanoparticles can be used in Fluorescent biological labels, drug and gene delivery, tissue engineering etc. Furthermore, nanoparticles have vast applications in daily life.

In modern research, nanotechnology has become an arena with budding applications in electronics and medicines. Nanotechnology is referring to the engineering and exploitation of materials whose size varies from 1-100 nm [1]. Nanoparticles are microscopic objects with at least one dimension less than 100 nm [2]. Due to their relatively large surface area, nanoparticles often exist with distinctive size dependent properties [3]. Moreover, a particle at nanoscale has length smaller than de Broglie wavelength of the charge carrier (electrons and holes) or the wavelength of light. So, at that length the periodic boundary conditions of crystalline particles vanishes. As a result, the physical properties of nanoparticles become quite different from bulk materials, which yields interesting and new applications. For example, nanoparticles are injected in matrix materials which are used as carriers for delivering drug molecules [2,4,5]. At present time, various metallic nanomaterials are being engineered using copper, zinc, titanium, magnesium, gold, alginate and silver [6]. In this review, we have discussed the different types of platforms of nanoparticles. General approaches to the synthesis of nanoparticles by using biological methods and the uses of nanoparticles in medicinal applications as well as in daily life routine were discussed.

There are diverse types of NPs platforms which differs in size, shape, compositions, and functionalities. These nanoparticles platforms are discussed below:

Liposomes: Liposomes are the first platform for nanoparticles. In 1965, liposomes were described as a model of cellular membranes [7]. After that, liposomes were used for the genetic and drug delivery. Liposomes are vesicles in spherical shape which contains lipids of single or multiple bilayer structure that can assemble itself in aqueous systems [8]. Liposomes can be used for targeting ligands to upsurge the buildup of diagnostic and therapeutic agents within anticipated cells. Now there are 12 liposomebased therapeutic drugs which are clinically approved.

Albumin-bound: Albumin-Bound Nanoparticles (NAB) uses the endogenous albumin trails which transports hydrophobic molecules in the bloodstream [9]. It quandaries with hydrophobic molecules with non-covalent reversible binding and dodging solvent-based toxicities for therapeutics [10]. So, this platform has adapted for drug delivery.

Quantum dots: Quantum dots (QDs) are semiconductor particles and their size is less than 10 nm in diameter. QDs shows unique size-dependent electronic and optical properties [13]. Mostly the quantum dots consist of cadmium selenide (CdSe) as core and a zinc selenide (ZnS) as cap (or shell) [14]. They are used in biological research as fluorescence imaging cell labeling and biomolecule tracking.

Iron oxide: Iron oxide NPs are studied as a passive and active targeting imaging agent because they are superparamagnetic. They have iron oxide core with a hydrophilic coat of dextran or other biocompatible compound to increase their stability [15,16]. They are mostly used in MRI. Till now, two SPIO agents, ferumoxides (120-180 nm) and ferucarbotran (60 nm) are clinically approved for MRI. 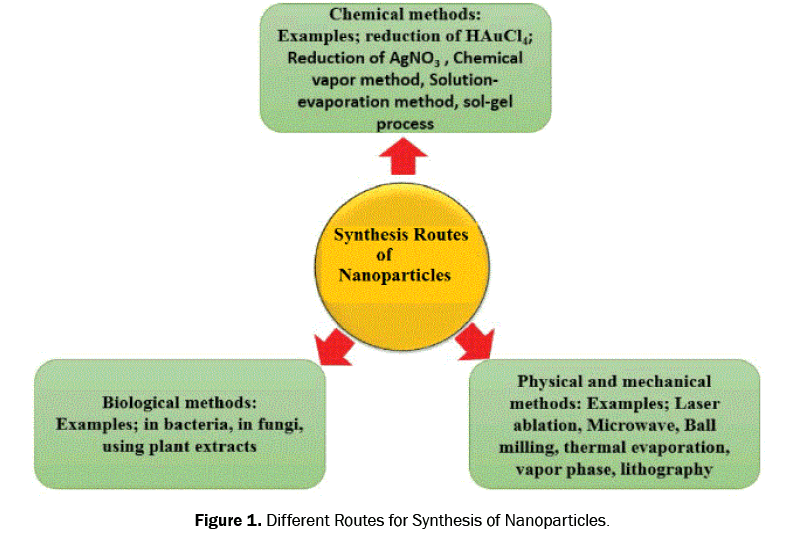 Biological Route for the Synthesis of Nanoparticles

Synthesis of Nanoparticles from Algae

Synthesis of Nanoparticles from Fungi

Synthesis of Nanoparticles from Yeast

Yeast strains possess more benefits over bacteria because of their mass production of NPs and easy to control yeasts in laboratory circumstances, the synthesis of numerous enzymes and rapid growth with the use of simple nutrients [35]. It was also reported that with an employment of silver tolerant yeast strain MKY3, hexagonal silver nanoparticles (2-5 nm) were produced extracellularly [36]. The incubation of Yarrowia lipolytica cells was done with changed concentrations of chloroauric acid and formed cell-related gold NPs and nanoplates. Moreover, it is found out that the quantity of cells and the utilized salt concentrations can affect the size of NPs [37]. Similarly, to fabricate an air electrode showing outstanding electro catalytic activity for oxygen decrease (ORR), zirconium phosphate with a synthesized mesoporous figuration with the use of yeast as bio template was employed [38].

Synthesis of Nanoparticles from Bacteria

Bacteria possess remarkable ability to reduce heavy metal ions and are one of the best candidates for nanoparticle synthesis. It was reported that ferric ion can be reduce to ferrous state by Thiobacillus ferrooxidans, T. thiooxidans, and Sulfolobus acidocaldarius when growing on elemental sulfur as an energy source [39]. In recent study, pure gold nanoparticles were produced by the bacterium Delftia acidovorans in which the production of a small non-ribosomal peptide, delftibactin were responsible for generating the gold nanoparticles [40]. The extracellular formation of gold nanoparticles of 10-20 nm size was synthesized by the bacterium Rhodo Pseudomonas capsulate. These nanoparticles were synthesised by an NADH-Dependant Reductase [41]. It has been illustrated that bacteria found at Alpine sites have the capability to produce zero valent palladium (Pd0) nanoparticles. It was found that Pseudomonas cells were involved in producing catalytically active nanoparticles [42]. Copper nanoparticles were found di cult to synthesize because copper at nanoscale are unstable. In 2013, pure and stable copper nanoparticles were produced by using Morganella Morganii. It was stated that M. Morganii synthesizes the Cu nanoparticles intracellularly by uptake of the Cu ions and subsequent binding of the ions to either a metal ion reductase or similar protein. This causes the reduction of the metallic ion to metallic CuO which then accumulates extracellularly as nanoparticles once effluxed out of the cell [43].

Synthesis of Nanoparticles from Plants 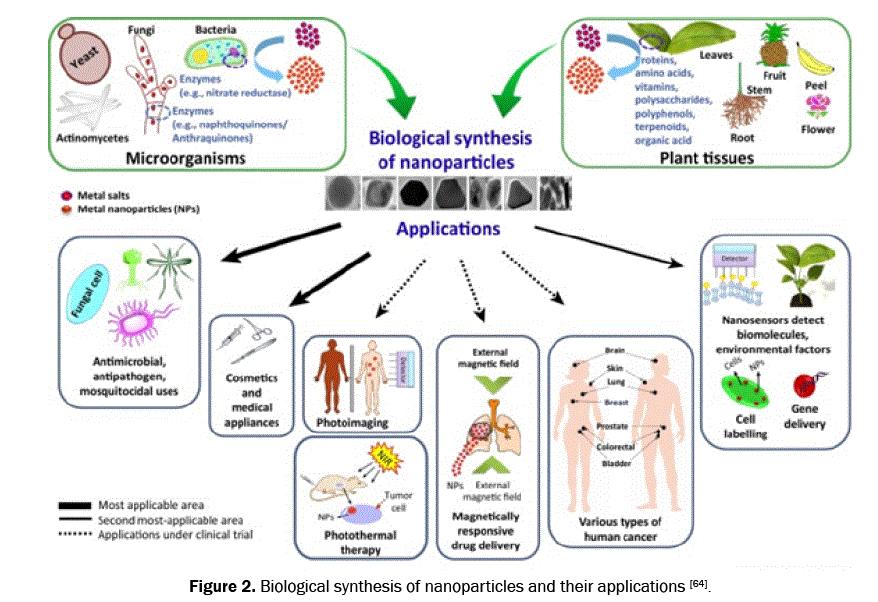 Figure 2: Biological synthesis of nanoparticles and their applications [64].

They are used in Fluorescent biological labels [65-67], drug and gene de-livery [68,69]. They are used for the bio detection of pathogens [70] and for the detection of proteins [71]. Nanoparticles can be intended for the probing of DNA structure [72] and tissue engineering [73,74]. Nanoparticles can be used for tumor destruction via heating (hyperthermia) [75]. They help in the parting and refinement of molecules and cells [76], MRI contrast enhancement [77] and phagokinetic studies [78]. Other applications regarding manufacturing and materials, energy and electronics are: Carbon tetrachloride trash in water can be cleaned up by using iron nanoparticles. Iron oxide are helpful in cleaning of arsenic from water wells. platinum-cobalt nanoparticles catalyst is used in fuel cell which produces more catalytic activity than pure platinum. Copper nanoparticles are more reliable in space mission and other high stress environment. The power of battery can be increased by coating silicon nanoparticles over anodes of lithium ion batteries. Semiconductors nanoparticles can be used in a low temperature printing process that helps to produce low cost solar cells.

Nanoparticles are also used in routine life in following ways:

Nanoparticles are added to materials to make them stronger whilst often being lighter. They have been used in tennis rackets, golf clubs and shoes.

Nanoparticles in Dyes and Veneers

Dyes and Veneers industry is rising gradually round the orb. Dyes and Veneers not only assist the determination of embellishment but also a means to shield treasured metals and buildings from deterioration. Nanotechnology in Dyes and Veneers talents to justify all desire possessions [79]. New paint skill contests bacterial and fungal evolution with nanoscale Ag. AgNPs in wall paint thwart the creation of mold exclusive buildings and the evolution of algae on external walls. Ag inhibits the several stages of cell breakdown; it abolishes a wide range of germs and makes it grim for germs to develop confrontation [80]. NPs are so minor that they can establish themselves faithfully sufficient and pledge organized to form a molecularly wrapped sur-face. The presence and practicality of nanoparticles takes many benefits like healthier surface appearance, decent chemical confrontation, informal to clean, shielding effect against fog, high performance coating, self-cleaning etc.

Nanoparticles in Textiles and Clothing

Within the last span, Nanotechnology based progress in textile laments, yarns, and fabric finishing have directed to the growth of numerous new and enhanced textile products. Freshly, a nano-based technology has been developed by swiss company Scholler to yield a new brand of fabrics called soft-shells, which is a functional stretch multi-layer fabric. Furthermore, several antimicrobial textile treatments are presently being fashioned that can play very noteworthy characters in fortification against a wide range of physical/chemical/biological terrorizations. Nano-based textile composite materials encompass another gifted sector, which is leading the advances of novel materials for engineering applications.

Nanotechnology and nanomaterials are found to be useful in several cosmetics products like conditioners, make up, suntan lotion and hair care products. Cosmetics are applied to the stratum corneum, known as dead cells, which is used to shield the body from the in-filtration of foreign materials including cosmetics [81]. The appearance of skin can be improved by nanocarrier system which empowers the cosmetic agents to breach the skin layers where they stimulate skin metabolism. To increase the concentration of active agents in cosmetics liposomes (vitamin A, E and CoQ10) are used [82].

Nanotechnology has become one of the utmost hopeful technologies to transfigure conservative food science and the food industry. Nanotechnology-assisted dispensation and packaging has evidenced its capability in food systems. Nanoparticles can be produced by different groundwork technology with different physical possessions that could be used in food. Present scientific regulation of food nanotechnology is branded by frequent worries concerning risk characteristics. Functionality of food nanotechnology determines its range of applicability. Food nanotechnology can affect the bioavailability and nutritional value of food based on its functions. The biological properties of nanomaterials are mainly dependent on their physicochemical parameters. The main association of nanotechnology and food industry is that nanotechnology is enhancing food security, refining flavor, increasing storage life, nutrient delivery and serving functional foods [83].

Catalytic Use of Nanoparticles

Catalysis is essential use of metal NPs. Because of the large surface area of nanoparticles, it shows effective potential as a catalyst. Several investigators suggested that metal nanoparticles are very useful catalysts due to the reason that substantial number of atoms remains at the surface, so these surface atoms is available for the chemical transformation of substrate. Different nanomaterials are used as a catalyst including metals and its oxides, sulfides and silicates. Catalyst activity can be defined by Turn over Number (TON) and its efficiency by Turn over Frequency (TOF) [84].

In this review, we presented a brief overview about NPs, types of nanoparticles platforms, their biological synthesis and applications. Due to their small size, NPs have large surface area, which make them suitable candidate for various applications. Different biological methods for the synthesis of nanoparticles are also brie y described in the review. Furthermore, medicinal applications and its uses in routine life are brie y discussed in the review.