A Review on Some Selected Bio-Based (Green) Flame Retardants

Bio-based flame retardants are taking their share in the world of flame retardant formulations. Sustainable halogen-free flame retardants are derived for various industrial applications. However, the scientific community has produced significant biobased additives for polymers from renewable resources. The challenging insight is to take advantage of the chemical structure of bio-based resources to explain their specific mechanism of retardance. Bio-based flame retardants retard flame by forming chars. The chars formed to serve as a heat sink, preventing heat transfer to the bulk of the material. Studies have shown that there is a limited amount of published scientific work on this subject.

Flame retardants have been used in many consumer and industrial products since the 1970s, to reduce the ability of a material to ignite or to act as a barrier (heat sink) to a burning material [1]. The fact is that much attention has been given to synthetic fire retardants over these years. A great part of commercially available flame retardants is oil-derived organic compounds (e.g. organo-halogenated, organo-phosphorous, organo-nitrogen compounds). As part of oil-based products, they face the same issues: growing scarcity of petroleum, geopolitical problems, impact on global warming. Moreover, some of these compounds (particularly the halogenated compounds) have received a bad press because they are suspected to provoke specific health and environmental concerns. In the prospect to propose more eco- friendly materials, it is necessary to go further in the application of the Green Chemistry principles as defined by Anastas and Warner [2] and thus to promote the development of bio-based additives for polymers [3]. However, in recent period the scientific community has produced a significant number of papers dedicated to the development of flame retardants from renewable resources. The ban of some halogenated compounds and the search for alternative solutions has been an important driving force for the development of such new bio-based additives. But another challenging insight is also to take advantage of the particular chemical structure of bio-resources to promote and emphasize specific flame retardant mechanisms [3].

Bio-based flame retardants generally refer to compounds that can be obtained or derived from biomass which is defined as the biological matter that can be found on earth [3,4]. It includes plants, animals and microorganisms. Aside from bacteria, the entire biomass on land accounts for about 560 billion tons of carbon. The overview of the composition of biomass has been given by Vassilev et al [4]. They based their analysis on the general classification of biomass in groups, sub-groups, varieties, and species. They were able to find out the most vital elements which when arranged in the decreasing order are; carbon, hydrogen, nitrogen, calcium, silicon, magnesium, aluminum, sulfur, iron, phosphorous, chlorine, sodium, manganese, and titanium. From studies, it is worthy of note that some of these elements have the flame retardant ability. These biomolecules can be used as such or converted to derivatives by chemical or biological treatments. Thus bio-based building blocks can be obtained and further modified to bring flame retardant functionalities as shown in Figure 1 below. Figure 1. The process of obtaining bio-based additives for polymer [4].

They are biological molecules containing carbon, hydrogen and oxygen atoms. The compounds that got more attention for flame retardant development were probably polysaccharides, and more particularly starch, cellulose and chitosan [5].

Starch: This is a polymer that is synthesized by plants as energy storage [5]. Starch can be hydrolyzed into simpler carbohydrates also called dextrin by acids or enzymes. For example, cyclodextrin is a component of the flame retardant system obtained by degradation of starch by Bacillus amylobacter bacteria. Sorbitol may also be used in flame retardant formulations. The fermentation of glucose and grape stock generates itaconic and tartaric acids respectively. These two organic acids have been used as raw materials for the development of flame retardant [6]. The Thermogravimetric curve of starch under inert atmosphere highlights two main weight losses as shown in Figure 2 below. The first weight loss occurring at a low temperature up to 110°C corresponds to evaporation/physical dehydration phenomena. As a matter of fact, starch is a highly hygroscopic material [6]. The second mass loss corresponds to chemical dehydration and thermal decomposition of starch and starts from 300°C. The thermal decomposition of starch gives a 15-20 wt% residue at high temperature. Cellulose: Cellulose is a linear homopolymer composed of D-glucose units linked by beta 1-4 glycosidic bond [7]. The thermal decomposition of cellulose occurs in one main step between 300 and 400°C, the higher mass loss rate being observed around 370°C. Below 300°C cellulose undergoes dehydration reactions that give rise to a small mass loss. At high temperature (800°C), a stable char representing 15 wt% of the initial mass is observed. This residue has a structure similar to that of lignin char. It should be added that the degradation pathway of cellulose may be modified depending on the heating conditions and the presence of other components in the surrounding. Thus at a low heating rate, dehydration reactions are favored and the char yield is enhanced [8].

Chitosan: This is a random copolymer of D-glucosamine and N-acetyl-D-glucosamine bonded by β 1-4 linkage [9]. This is obtained by chemical or enzymatic deacetylation of chitin which is the main component of shrimp (or other crustaceans) shells. Under inert atmosphere, the thermal degradation of chitosan occurs in three steps. Below 140°C, the first weight loss corresponds to the release of water loosely bonded [10]. The second and main step of degradation occurring between 250°C and 350°C is assigned to further dehydration, deacetylation, and depolymerization of chitosan. Above 400°C, a low mass loss rate attributed to residual decomposition reaction is observed. At 500°C, the char is as high as 40 wt%. As shown by Moussout [11], this char is much lower (circa 20 wt%) when degradation occurs under an air atmosphere. By comparing chitin and chitosan, these authors also evidenced that the deacetylation degree modified both the hygroscopic nature and thermal stability of the carbohydrate.

Alginates: These refer to the derivatives of alginic acid and alginic acid itself [12]. These are carbohydrates present in the cell wall of brown algae as calcium, magnesium and sodium salts of alginic acid. Alginic acid is a copolymer of mannuronic acid and guluronic acid, repeating units being bonded by a b 1-4 linkage. The proportion and distribution of co-monomers are determining parameters to explain the physical and chemical properties of the polymer. Thus alginates could be considered as an anionic polysaccharide. The thermal behavior of alginic acid and sodium alginate was studied by Soares [13]. Under nitrogen, two main steps of degradation are highlighted (Figure 2). At low-temperature alginates exhibit a dehydration process. The moisture content was found to be higher for sodium alginate (15 wt%) than for alginic acid (10 wt%). The main decomposition step occurs between 150°C and 300°C. In the case of alginic acid, it leads to a carbonaceous residue that was found to be between 21 and 26 wt% at 800°C depending on the authors [14,15]. In the case of sodium alginate, Soares et al. obtained a 22 wt% residue consisting mainly of sodium carbonate.

Natural polyphenols are a class of organic molecules found in plants and characterized by the presence of phenolic units bearing one or several hydroxyl groups associated in a high molecular weight complex structure. They result from the secondary metabolism of plants through the shikimate pathway [16]. The molecules that have raised the interest of researchers as raw matter for flame retardants belong mainly to simple phenols such as phloroglucinol or eugenol and to polymerized structures (tannins and lignins).

Tannins: These are phenolic bio-molecules that can be found in different parts of plants (bark, leaves, roots, leaves, fruits. The thermal degradation of tannins extracted from pine bark was studied by Gaugler and Grigsby [17]. It was highlighted that the decomposition occurs over a wide range of temperature (180oC-800oC) and was dependent on the mode of extraction and the degree of purification. Whatever the process, a high amount of char was formed at high temperature (>30 wt%). The largest char residue (48 wt%) was obtained after ultra-filtration of tannins and was quite similar to that of pure catechin.

Lignin: Lignin is a cross-linked phenol polymer from the plant cell wall. It’s the third most abundant organic material after cellulose and hemicelluloses. Lignin was studied as a flame retardant for various polymers and represents an interesting opportunity to create more eco-friendly and safer plastics and resins [18]. They play an important role in the mechanical properties of cell walls by bringing rigidity and in the protection against decomposition by giving waterproofness. On a chemical point of view, lignins can be viewed as polymers of monolignols. The thermal decomposition of lignin has been reviewed by Brebu and Vasile [19]. In comparison with other components of biomass, lignin degrades over a broader range of temperature between 200°C and 500°C (Figure 3).

These are linear biological polymers found in living cells [20]. Well, known examples of phosphoproteins are casein (protein of milk) and phosvitin (protein of egg). The amino acids residues that may be modified by phosphate groups are usually serine, threonine or tyrosine (Figure 4). 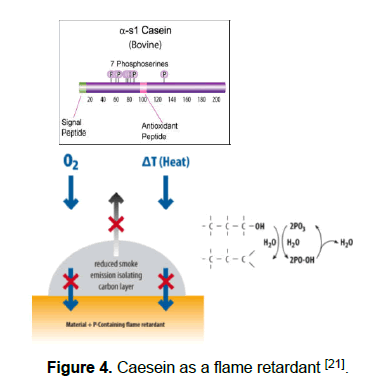 Caesein: This is a family of related phosphoproteins [21].

Egg shell: The flame retardant property of egg shell powder could be attributed to its calcium carbonate content among other factors.

Egg shell contains CaCO3 which on the application of heat/ flame decomposes according to the equation:

with the evolution of CO2 which does not support combustion. The more the fillers are incorporated into the polyester, the more the quantity of CaCO3 in the composite and the less the tendency of the composite to burn since CO2 is a good fire extinguisher [22].

Lipids are a group of naturally occurring molecules, one of whose function is to act as a flame retardant additive [23]. The thermal stability and the decomposition mechanism of lipid depend on their nature [24]. However, the analysis of some vegetable oils (soybean, castor oil, jojoba) indicates that the decomposition occurs in the range of 300-550°C and leaves no residue at high temperature [25-27]. Due to the presence of various functional groups (carboxylic acid, hydroxyl, double bonds), a great variety of reactions may be obtained. Therefore, some lipid derivatives cardanol or undecylenic acid have been used to prepare phosphorous containing monomers that can act as reactive flame retardants, mostly in thermosetting polymers [28].

The modes of action of flame retardants are categorized according to whether the mechanism is physical or chemical action and also according to the phase where these mechanisms take place (that is condensed or gas phase) [29-34]. All the bio-based flame retardants systems retard flame by physical action, basically by so-called charring effect [35-37]. The char formed helps to create a heat sink at the surface of the sample. This heat sink prevents the transfer of heat to the bulk of the material [38-40]. The charring effect could be improved if an expanded layer is formed by a phenomenon called intumescence [41].