It was first conducted testing on antimicrobial activity of a plant Galega orientalis (Lam) on the growth pure cultural of bacteria gram positive (Micrococcus luteus), gram negative (Escherichia coli XL1, DH5) and yeasts (saccharomyces cerevisiae W303). The material for the study was dried vegetative mass Galega orientalis (Lam) in the phase of budding and early flowering. In experiment used medium “Endo” for gram negative, medium LB for gram positive and gram negative, and suslo agar for yeasts.
As a result of the experiment was revealed that 20% concentration of aqueous extract of this plant had inhibitory effects on the growth of pure cultures of bacteria and yeast. Antimicrobial effect of this drug on the growth of gram-negative bacteria (Escherichia coli XL1, DH5) were within 20, 0-30,0% (P<0.001), gram-positive bacteria (M. Luteus)-12,0% (P<0.05) and yeast (S. cerevisiae W303)-30,5% (P<0.01) compared with control. It should be noted that in all cases the addition of the drug Galega orientalis (Lam) did not alter the morphology of colonies (colony size) test strains [5].
The questions of search the new antimicrobial agents, include natural origin, is very actual during last years. Increasing microbiological pure of eating products, feed grinders, veterinarian preparations are one of the urgent task of Scientifics and industrials.
It has proved the influence of different concentrations of aqueous extract of this culture on the growth of pure cultures of gram-positive and gram-negative bacteria and yeast. Install antimicrobial influence 20-30% concentrations of preparation on the bacteria’s growth (Escherichia coli XL1, DH5). Bacterial action of preparation on the bacteria’s (Micrococcus luteus) and yeasts (saccharomyces cerevisiae W303) were lower. It was described the prospects for further investigation of this problem. It has proved possible relationship between the antimicrobial activity of the extract of this plant and bloating of the rumen in ruminants [5].
To test this hypothesis we need to conduct further comprehensive studies. It is also advisable to extend the range of tested cultures, ways of extractions and the range of concentrations of the studied preparations.

In the scientific world continue searching the new and more stable strong components of antimicrobial action of natural origin as opposed to the existing synthetic antibiotics and the improvement of the microbiological purity of food, feed additives. According to the publication of domestic and foreign authors, there is considerable interest in exploring the antimicrobial activity of unconventional but promising agricultures, one of which is Galega orientalis (Lam), which refers to perennial legumes [1-5].

Using of natural substances that have antimicrobial activity, is important enough, given a few things: the micro-organisms do not have resistance to them and the prolonged using; they do not cause harmful (adverse) effects on the human and animal body; due to its braking action on the undesirable microflora can be applied in the food industry because food production is not allowed to use synthetic antibiotics (with the exception of peptide antibiotic nisin).

The material for investigation served dried vegetative mass of plants in the phase of budding and beginning of flowering. The medium “Endo” for growth was used in the experiment gram negative, medium LB for gram positive and gram negative, and suslo agar for yeasts.d

The research was conducted at the Institute of cell biology NAS of Ukraine, Department of analytical biotechnology.

It was prepared 10% and 20% extract of the preparation (dried herb) by boiling and maceration for 10-15 hours. The extracts were sterilized by cold filtration. After that, on the surface of the cups with agaritine environment was applied in 0.1 ml of the investigated extract and sowed her grass proper culture. All the experiments were performed in 10 control and 10 experimental cups. We analyzed the appearance of the colonies for 2-3 days after seeding at +30ºC (yeast) and the first day at +35 to 37ºC (bacteria), comparing experimental variants with the control (without extract).

It was noticed that examining culture products in concentration 10 % didn’t influence the growth of bacteria Gram positive, Gram negative, yeasts much. Due to increasing in concentration of water extract up to 20% found that Petri-dish control group was grown at 540 ± 15 colonies of E. coli strain XL1 and experienced with the addition of 20% of the preparation Galega orientalis (Lam) there were 110 colonies less. Therefore, it was observed inhibition of growth of bacteria by 20.0% (P<0.001) compared to the control cups. Intergroup difference in this indicator is statistically probable. The test results of the antimicrobial activity of the test preparation are shown in table 1.

Table 1: Bioactivity of pure cultures of bacteria and yeast in the background of the action of the extract of Galega orientalis (Lam), (Ð ± m, n=10).

The growth of colonies of pure cultures Ðscherichia coli strain XL1 control and test groups are shown in Figure 1. 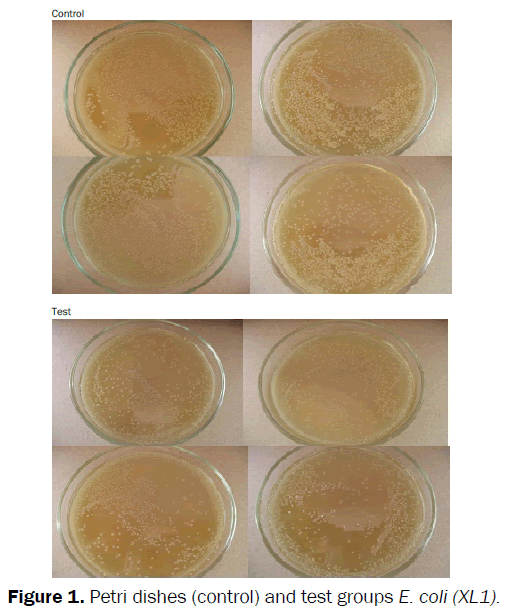 In the study of antimicrobial action of 20.0% water extract of Galega orientalis (Lam) on the growth of gram-negative bacteria E. coli strain DH 5 it was found that in the experimental cups were 117 smaller colonies than the control. In percentage terms this means inhibition of bacterial growth by 30.0% (P<0.001).

It was conducted microbiological studies indicate that was slightly less antibacterial activity of an investigational preparation against gram-positive bacteria M. luteus. It was found that 20% of water extract of Galega orientalis (Lam) inhibits the growth of microorganisms by 12.0% (P<0.05) compared with control [4].

Figure 2 shows the growth of gram-positive bacteria Micrococcus luteus on the background of the action of water extract of Galega orientalis (Lam). 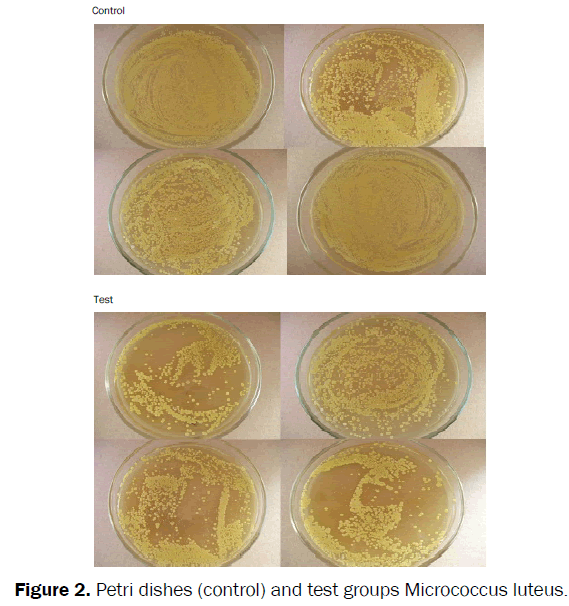 The Image clearly shows fewer bacterial colonies in the experimental Petri dishes and as a consequence greater bacterial activity of water extract of Galega orientalis (Lam) on the growth of pure cultures of gram-positive microorganisms. The quantitative difference in the colonies between the control and experimental cups were 227.

It has showed the negative effect of water extract of Galega orientalis (Lam) on the growth eukariotic microorganisms–yeast saccharomyces cerevisiae strain W303. It was found that in the experimental cups the number of colonies was 30.5% (P<0.01) compared with the control. 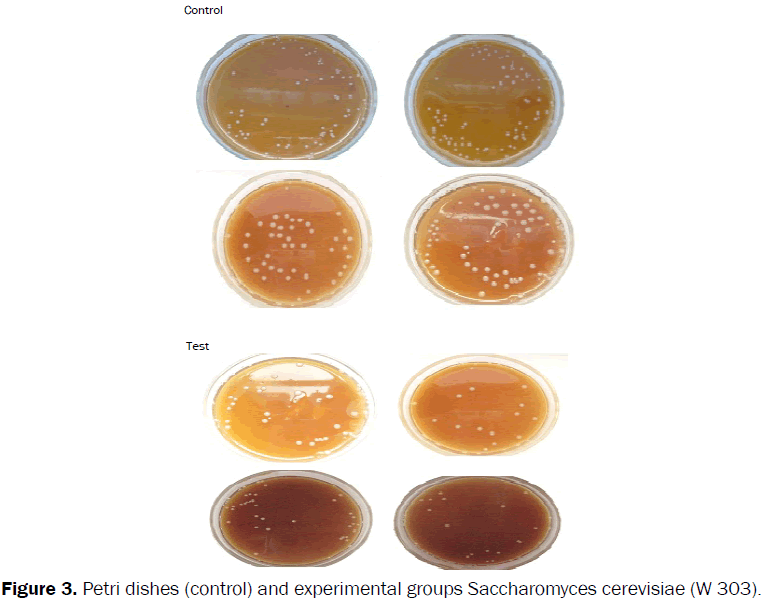 Along the way, to note that in all cases, experimental studies of the addition of the drug Galega orientalis (Lam) was not altered colony morphology strains tested.

Consequently, the obtained results allow noting a slight antimicrobial effect of 20% water extract of Galega orientalis (Lam) on the growth of pure cultures of gram-negative and gram-positive bacteria and yeast. This fact can be used in the food industry as an antimicrobial agent natural origin, to preserve and ensure the microbiological purity of the products, and also suggests that the lack of tympanites in animals which were fed this plant may be associated with the inhibition of microbial growth.

To test this hypothesis we need to conduct further comprehensive studies. It is also advisable to extend the range of tested cultures, ways of extractions and the range of concentrations of the studied preparations.