Nowadays, there is increasing number of chronic cases of poisoning than acute as a consequence of environmental pollution. Diseases of the digestive, urinary, respiratory and reproductive systems caused by continuous exposure to contamination by toxic pesticides are nonspecific and manifested as a consequence of compromised immune system of animals [1,2].

Neonicotinoids represent one of the mostly used, quickest developing and promising broadly distributed class of insecticides [3-5]. Neonicotinoid pesticides have started supplanting pyrethroids, chlorinated hydrocarbons, organophosphates, carbamates, and other insecticides [6]. Neonicotinoids are an acetylcholine- insecticides that influence the central nervous system of insects resulting in paralysis and death [7] and are classified as N-nitroguanidines (imidacloprid, thiamethoxam, dinotefuran, and clothianidin) and N-cyano-aminides (acetamiprid and thiacloprid). They are utilized in a variety of venues ranging from veterinary medicine for livestock against external parasite, urban landscaping, and in many agricultural systems as agents of crop protection [8]. They have a broad spectrum insecticidal activity and a high level of efficacy at low concentrations [9]. Neonicotinoids a re highly toxic to many classes of insects and exhibit relatively low vertebrate toxicity when compared with other insecticide classes currently in use [10].

Although, they are classified by the EPA [Environmental Protection Agency, 2003] as class II and III toxins of low mammalian toxicity and are labeled with a signal word: “Warning” or “Caution” [11] but in 2013, the European union restricted some neonicotinoids and its use came under increasing security over their environmental impacts [12] and in ban the outdoor use of certain neonicotinoids (Clothianidin, Imidacloprid,and Thiamethoxam). The previous studies revealed that Imidacloprid, one of the mostly used insecticide compared to organophosphate and carbamate induces significant immune-toxicity in male albino rats [13,14], mice and rat bone-marrow cells [15,16], Furthermore, imidacloprid causes DNA strand breaks in human blood lymphocytes [17] and leukocytes in culture. There are missing information about different groups of neonicotinoids and its effect on ruminant immune system considering that neonicotinoid insecticides are a new class of agrochemicals.

Sheep have been used in this experiment as a model of ruminants which are widely distributed and consumed in Egypt.

Staphylococcus aureus bacteria were cultured onto nutrient agar. Cells harvested onto HBSS and opsonized using 10% homologous serum for 1 hour at 37˚C with frequent shaking, washed twice, pellet was suspended in 1 ml RPMI without phenol and adjusted spectrophotometrically to give final concentration of 7.5 X 105 cfu/ml using RPMI.

The assay conducted after modification of the original assay [18].In sterilized glass tubes exactly 1 ml of each concentration of each pesticide was transferred and 1 ml of PMNL cells was added and incubated at 37˚C with frequent shaking. After exactly one hour of incubation, one ml of Staphylococcus aureus bacteria was added to each tube so that PMNL: cfu is 1:15. Control tubes were prepared containing PMNL and Staphylococcus aureus only. Tubes were incubated for further 2 hours with frequent gentle shaking. At the end of the incubation period, samples were taken from each tube and laid on glass microscopic slides and spread over the slide, fixed with methanol and stained with Giemsa stain for microscopic examination. A total of 50 phagocytic cells engulfing Staphylococcus aureus were counted per each slide.

Measurement of nitric oxide was assessed according to the assay described by [19]. Briefly, 100 μl from each sample was transferred into flat-bottom 96-well ELISA plate and 100 μl of Griess reagent (0.5% sulfanilamide; Sigma Chemical Co.) in 2.5% phosphoric acid (Mereck Co.) and 0.05% N-(1-naphthyl) ethylenediamine dihydrochloride (Sigma Co.). The mixture was incubated at 21°C for 10 minutes. Absorbency of the samples and standards was measured at 570 nm using ELISA reader (Dynatech MR7000; Dynatech Laboratories Inc.). Absorbency of test samples was converted to micromolar of nitrite by comparison with absorbance values of sodium nitrite (Sigma Co.) standard curve within a linear curve fit.

Assaying for lysozyme was done according to Peerters and Vantrapen [20]. Briefly, lysoplates were prepared by dissolving 1% agarose in 0.067 M PBS at pH 6.3 and heated to 100°C for complete dissolve, then cooled down to 60°C-70°C, 500 mg uniform suspension of Micrococcus lysodeikticus in 5 ml saline was added to 1 liter of agarose and mixed well. Plates were poured at thickness of 4 mm depth and left to cool down and wells 2 mm in diameter in 4 X 4 rows, 15 mm apart were cut in agarose. At time of assay, plates, serum samples, and standard lysozyme solutions were brought at room temperature. Exactly 25 μl of each serum sample were put in 2 wells, the same was done with standard lysozyme solutions. Plates were incubated at room temperature for 12-18 hours. The diameter of clearance zone around each well was measured to the nearest 0.1 mm. A standard curve was developed for lysozyme standard solution at concentrations of 3, 15, 30, 60 and 120 μg/ml. Log of concentrations were plotted against diameter of corresponding cleared zone on a semi-logarithmic graph.

Significant difference in phagocytic activity detected between Lex and Blanch at 100 μM (Figure 2). Meanwhile, significant differnece between Oshin and both Blanch and Lex at concentration 50 μM and 10 μM.

Figure 4: Comparison between 3 different concentrations of neonicotinoids on lysozyme activity of sheep PMNL. 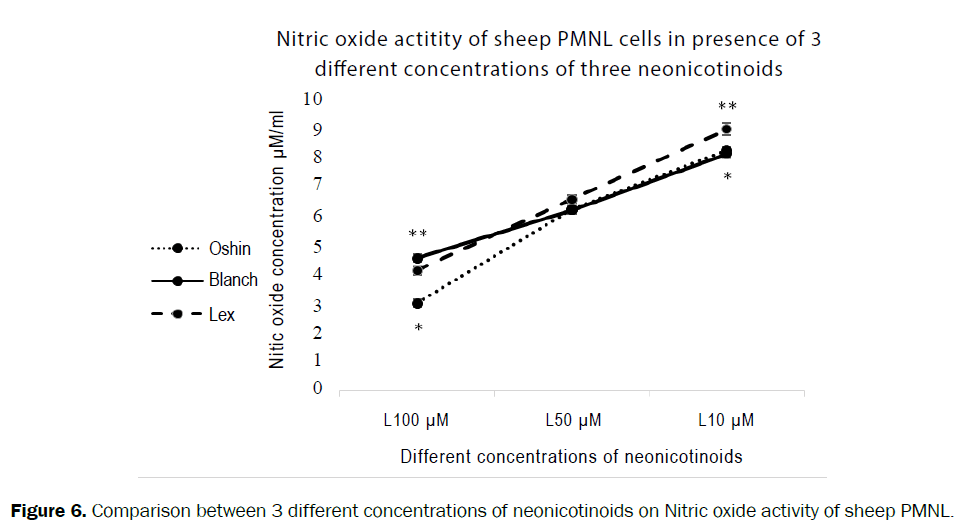 Healthy and compatible immune defense system is essential for animal’s health. This defense can be weakened by environmental factors that may render animals more exposed to parasites and pathogens. Environmental pollution is a detrimental factor for normal immune system in animal’s farm .Insecticides is required for crops and animals all over the world to combat plant and animal pathogens. Unfortunately these insecticides are also harmful for livestock. Vital systems in livestock are negatively affected by insecticides contaminated environment.

Neonicotinoids which is a new generation of pesticides are tested in current study. Three neonicotinoids (Oshin from Dinotefuran group, Blanch from thiacloprid group and Lex from thiamothoxam group) in current study manipulated polymorph nuclear leucocytic activity. Three concentrations of each pesticide were tested on sheep phagocytic activity in vitro showed dosedependent significant decrease in this activity. The most negative effect was obtained in higher dose, 100 μM followed by 50 μM then the lowest effect was from 10 μM .The overall phagocytic activity of control non-treated cells was significantly higher than all treated cells with different concentration. Suppression of immune response to infection by exposure to neonicotinoids was evidenced in bees [21] and [22], fish [23] and birds [24]. Also in [25], reported that oral administration of imidacloprid (which has same chemical structure of Thiacloprid) to female mice significantly suppressed some cellular and humeral immune parameters in treated group in comparison with the control group. Similar results in honey bees, where increased exposure to neonicotinoids (Thiacloprid, Imidacloprid and Clothiandin) decreased immunity parameters were reported [26].

Oshin had the most powerful negative effect on sheep PMNL phagocytic activity especially at 50 μM and 10 μM. Dinotefuran, a third generation and new neonicotinoid insecticide commercialized by Mitsui Chemicals (Tokyo, Japan), could be a useful candidate in public health because it shows low mammalian toxicity and great insecticidal activity against a broad range of pests. Meanwhile it has adverse effect on immune system suppressing phagocytosis. The previous studies on Dinotefuran shows mammalian toxicity by affecting nervous and immune systems (decreased spleen and thymus weights) [27].

According to many researchers, lysozyme is antimicrobial enzyme and one of the most important components in the nonspecific humeral immune mechanism due to its effectiveness and wide-spread occurrence [28].

Mean lysozyme concentrations in the three groups were significantly lower than control non-treated cells. Significant difference between Lex and both Oshin and Blanch at 100 μM concentration. At 50 μM concentration, only significant difference between Blanch and Lex with no significant difference between the three neonicotinoids at 10 μM concentration. Kimura-Kuroda et al. [29] demonstrated that chemicals that bind irreversibly to specific receptors (neonicotinoids, genotoxic carcinogens and some metalloids) will produce toxic effects in a time-dependent manner, no matter how low the level of exposure. This effect of neonicotinoids may be evidenced from basic neuroscience research that the neonicotinoids have effects on mammalian neurons as well as on invertebrate ones, and that the effects on the nicotinic acetylcholine receptors (nAChRs) are more significant in vertebrates than was initially stated by the pesticide companies. Cai et al. [30-32] studies demonstrated a connection between the nAChRs and the immune system and suggest that neonicotinoid insecticide act a source of free radicals in exposed human cells where the ROS (reactive oxygen species) are highly reactive and produce damage of cells.

Nitric oxide (NO) is important as a toxic defense molecule against infectious organism. Cells of innate immune system, macrophage, neutrophil, and natural killer cells use pattern recognition receptors to recognize molecular patterns associated with pathogen activated macrophage then inhibit pathogen replication by releasing a variety of molecules, including NO.

Neonicotinoid application (Oshin, Thiamethoxam and Thiacloprid) in this study caused a significant decrease in nitric oxide production in tissue culture compared with control (p<0.05). The decrease in nitric oxide concentration was dose dependent. This results was inconsistent with the study [33] confirmed the finding that imidacloprid induced the mRNA transcriptions of the three isoforms of nitric oxide synthases (iNOS, eNOS, nNOS) in brain and two isoforms (iNOS, eNOS) in the liver. Exposure to imidacloprid caused significant increase in nitric oxide production and lipid peroxidation in plasma, brain, and liver. While the superoxidegenerating enzyme xanthine oxidase activity was elevated in both tissues, myeloperoxidase activity was increased only in the liver. Antioxidant enzyme activities showed various alterations following exposure, but a significantly depleted antioxidant glutathione level was detected in brain. Evidence of chronic inflammation by imidacloprid was observed as induction of pro-inflammatory cytokines such as TNF-a, IL-1b, IL-6, IL- 12 and IFN-c in the liver and brain. In conclusion, chronic imidacloprid exposure causes oxidative stress and inflammation by altering antioxidant systems and inducing pro-inflammatory cytokine production in the liver and central nervous system of non-target organisms. The same results of increased nitric oxide by using nicotinoids were observed in carp fish.

The results showed the presence of immune system damage at low concentrations of the three studied neonicotinoid insecticides (Oshin, Blanch and Lex). The damage of the immune system observed in the impaired phagocytic activity of the PMNL cells and in the decrease of the killing molecules released from the affected cells (namely lysozyme and nitric oxide). Oshin was the most negatively affected the phagocytic activity. The results contribute to the toxicology of these insecticides on environment and are a risk factor on animal health. The evidence of an immune system hazard related to these insecticides stresses the need for educational programs for agricultural workers to reduce the use of these chemicals in agriculture.

The authors declare on conflict of interest.