This study was carried out to determine the direction of flow of groundwater and overland flow at Ndele, Emuoha local Government area of Rivers state, Nigeria. The Global Positioning System (GPS) was used to determine the longitude, latitude and the elevation above mean sea level at ten (10) locations spread across the study area. Water level meter was also used to measure the depths to water table which was used to calculate the hydraulic head in each of the ten (10) hand dug wells analyzed. Surface elevation and hydraulic head contour maps were then generated using surfer 8 computer software. The surface elevation and hydraulic head contour maps developed revealed that the overland flow and groundwater flow are towards the same direction; South to South-Western parts of the region. This makes the watershed area more vulnerable compared to other locations in the study area. More efforts should be made towards establishing eco-friendly practices in the North, North-Western and North-Eastern parts of the community to minimize groundwater contamination. It is recommended that boreholes be sited in the North, North-Western and North-Eastern parts of the community to avoid contamination of potable water sources. Moreso, an appropriate geophysical survey must be carried out before any borehole is drilled in the area.

Water is a resource vital to all life on earth [1]. It is a natural resource that occurs either as freshwater or saline water and the quality can be altered by anthropogenic activities. Groundwater is the water that lies beneath the earth surface, filling the pore spaces of saturated zones of sedimentary rocks and in the basement terrain, it is found in fractures and fault zones [2].

Groundwater does not usually remain stationary, but moves or flows underground according to forces acting on the groundwater [3]. Groundwater moves along a flow path perpendicular to equipotential lines and the direction of movement is from lines of higher value to lines of lower value (i.e., higher to lower elevation or pressure). Groundwater flow paths are usually shown by arrows on equipotential surface plots pointing in the direction of groundwater flow. Groundwater usually flows towards and eventually drains into streams, lakes, rivers, seas, ponds, and boreholes. The flow of groundwater in aquifer does not always reflect the flow of water on the surface [4,5]. It is necessary to know the direction of groundwater flow to determine the recharge zones and make sure that human activities in the area do not pose threat to the quality of the groundwater to enable a sustainable use of the resources. Given that water always flows from a region of higher head to a region of lower head [6], it is found that groundwater use within an area at a higher water level directly affects the quality of water available to people living in regions of lower water levels.

Furthermore, it is necessary to estimate the direction of flow of groundwater in an area and take steps to ensure anthropogenic activities at the recharge area do not contaminate the water quality abstracted from shallow aquifers in the vicinity [8]. Also, the direction of overland flow in an area does not always depict the groundwater flow direction in the area hence, the need to employ field methods to determine the variation in hydraulic heads of different locations in the study area and estimate groundwater flow direction. 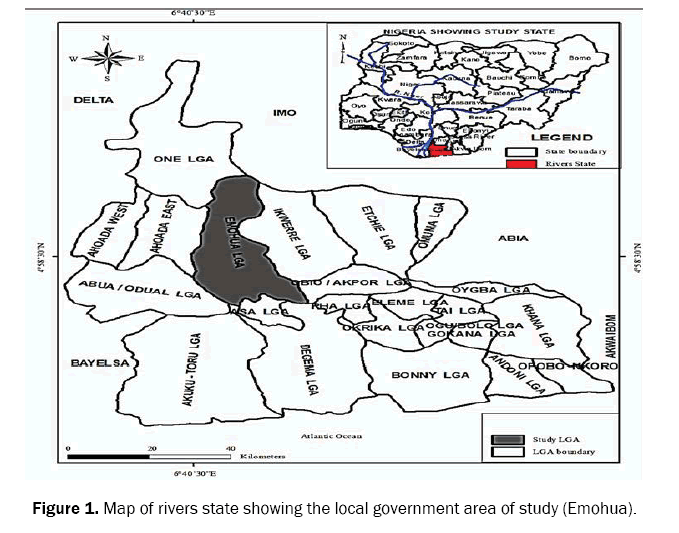 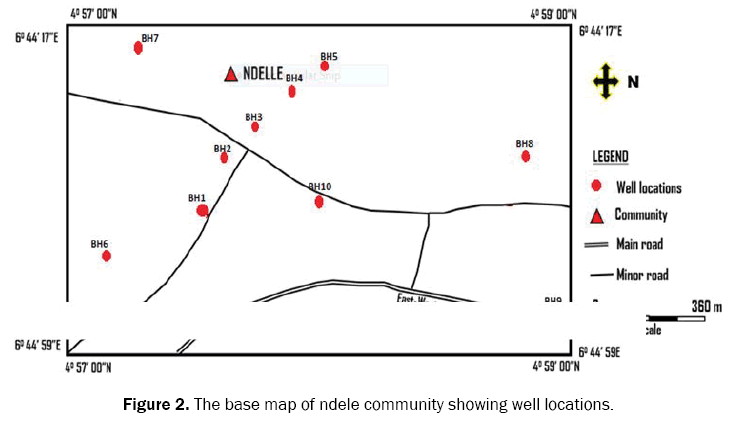 Figure 2. The base map of ndele community showing well locations.

The study area lies within the coastal flat plains of the Niger Delta which is a depositional environment basically and of almost featureless land sloping gently above mean sea level at the coastal fringe, though relatively low elevation occurs around the shorelines, waterfronts and stream [9]. The area is affected by tide with a maximum range of tide fluctuating between 1.8 m below mean sea level and 2.2 m above mean sea level [10]. The study area which is in Rivers State is drained by numerous rivers and creeks sourced from River Niger. The study area, Ndele is drained by the new Calabar River [10].

The study area lies within the Niger Delta which features tropical monsoon with two distinct seasons; the rainy season which is usually lengthy and heavy and the dry season which is normally very short. Only the months of December and January truly qualifiers the dry season months. In Port-Harcourt, there is a well-defined pattern of the monthly rainfall, described as bimodal. The harmattan which climatically influences many cities in West Africa is less pronounced in the study area. Temperatures throughout the year in the city are relatively constant, showing little variation throughout the course of the year [11]. The average temperature is between 25°C to 28°C in Port Harcourt city, which is the closest urbanized district to the study area. High rainfall is attributed to the proximity to the sea and its location on the parts of rain-bearing winds.

The study area, Ndele in Emuoha Local Government Area of Rivers state is located within the Niger Delta region of Nigeria, situated in the Gulf of Guinea and therefore has same geology of the Niger Delta. The Niger Delta is composed of marine shale at the base of its stratification, an overlying formation of intercalation of sandstone and clays of marginally marine origin, but eventually grading upward into a huge sandstone deposit. The groundwater formation is a multi-aquifer system because of the presence of certain clayey strata in formations of various thicknesses that acts as a confining layer between two rock strata. The present-day Niger Delta was formed during the tertiary period as a result of the interplay between subsidence and deposition arising from a succession of transgression and regression of the three main tertiary subsurface litho-stratigraphic units of Akata, Agbada, and Benin Formations [12]. Further studies and evidence from deep wells in the Niger Delta has also proven that the Niger Delta has a three litho-stratigraphic depositional succession (Akata, Agbada and Benin Formations) with an approximate thickness of over 5000 m of sediment body (Table 1).

Determination of Direction of Overland Flow

A total of ten (10) hand dug wells were used to estimate the hydraulic heads at different locations in the study area. With the aid of the water level meter, the depth to water table was measured and recorded. The Global Positioning System (GPS) was used in determining the latitudes and longitudes of the wells and the surface elevation with respect to Mean Sea Level on the surface of the earth. The surface elevation at different point varied. This uniform water level coincided with the static water level in the case of an unconfined aquifer while it was the piezometric surface in the aquifer was confined [13]. The values of the static water levels were contoured on the map of Ndele with lines that represent the water table contours. According to Buddermeier and Schloss [13], groundwater flows from the highest values of the hydraulic head to the lowest values in a direction perpendicular to the hydraulic head contour lines.

The Direction of Overland Flow 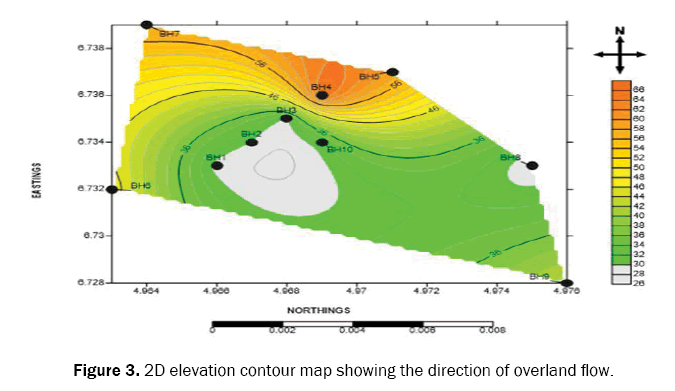 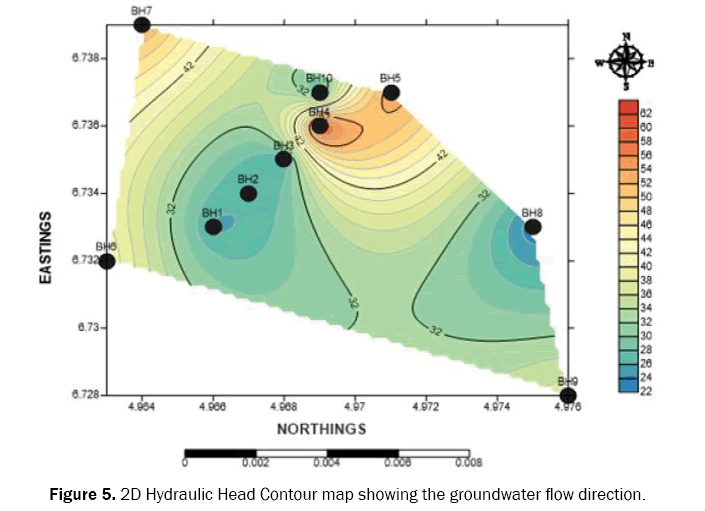