Fluoride Contamination in the Groundwater in and its Effect on Human Health in Alladurg Area: A Case Study of Medak District, Telangana State, India

A total of groundwater samples are one hundred and eight were analyzed for Anions are Calcium, Magnesium, Potassium, Sodium, Cations are Fluoride, Chloride, Sulfate, Carbonate, Bicarbonate, Nitrate and, pH, Electrical Conductivity, Total Dissolved Solids and, Total Hardness in the Alladurg area of Medak district, Telangana state, India. In the study area Fluoride concentration varies from 0.1 to 2.6 mg/L with an average of 0.8 mg/L. The World Health Organization (2012) guidelines are in fluoride range is 0.5 to 1.5 mg/L for drinking water and these ranges are normal for human body. And they are advised to less than 1.5 mg/L fluoride to avoid further fluorosis risks to consume in drinking water. In the study area fluoride concentration levels are exceeds above 1.5 mg/L in Basaltic area villages are Gunjothi (1.6 mg/L), Mungi (2.2 mg/L), Nyalkal (1.8 mg/L), Mirzapur (1.8 mg/L), Raikode (1.8 mg/L), Madhapur (2.5 mg/L), in lateritic area villages are Mirzapur ( 1.6 mg/L), Naimathabad (1.8 mg/L), Rejental (2.6 mg/L), Holgera (1.8 mg/L) and, Granitic area village is Kadchal (2.2 mg/L). Totally, in the study area fluoride levels exceeds in Basaltic area is 53%, Lateritic area is 26% and, Granitic area is 13%, these locations are not suitable for drinking purpose.

Fluoride is a common, natural, and abundant element in soil and, water. Fluoride is beneficial and detrimental effects on health in drinking water. In drinking water fluoride contamination is the major problem of the all over the World. Above 200 million people suffer from fluorosis in drinking water in the world [1-3]. Nearly found in 29 countries are most effected with fluorosis problems [4]. In India 22 states have been identified as endemic for fluorosis in humans [5]. In India high fluoride level has been reported in the states of Andhra Pradesh, Tamilnadu, Uttar Pradesh, Bihar, Rajasthan, and Punjab [6]. 62 million people are suffered from fluorosis in drinking water in India and 90% of the villages are use groundwater for domestic purpose [7,8]. More than 20 developed nations are suffering from fluorosis [9]. In Nellore district, Andhra Pradesh, India was the first reported in fluoride in drinking water [10]. Fluoride potential source in groundwater include different types of minerals, which is Apatite, mica, hornblende, amphibole, and many others [11,12]. In the groundwater fluoride is the main source of fluoride bearing rocks from which it get weathered and, leached out contaminating in the water and fluoride content is mainly due to natural contamination [11,13]. 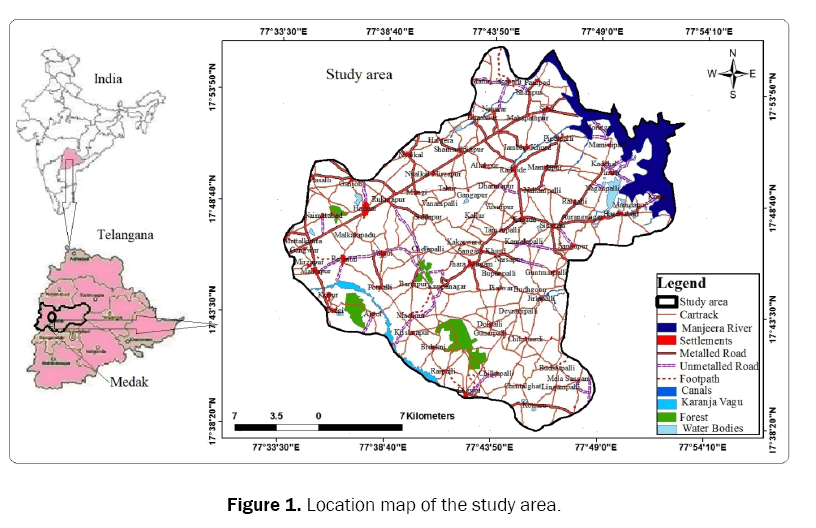 Geology of the Study Area

The present research study under investigation is a semi-arid region. The study area is a single formation known as Deccan traps (Figure 2). Groundwater occurs under water table in semi-confined conditions in joints and fractures. The density/intensity of fractures and joints play a major role in movement and occurrence of ground water. The fractured zones are under semi confined conditions. Approximately it occupies 80% of the study area. Figure 2: Geology map with location points of the study area.

A total of one hundred and eight groundwater samples were collected from different locations with different geology in the study area, in the month of August 2016. Samples were collected in good quality rinsed polyethylene narrow-mouth bottles. Samples were collected only from the bore well/hand pumps, which are in regular use for drinking purposes. The analysis of water samples were carried out following the preservation method recommended by American Public Health Association 2005 [14]. pH, EC and, TDS were measured using with pocket pH meter at the time of the field immediately. The cations (Calcium, Magnesium, Potassium and, Sodium) and, anions (Fluoride, Chloride, Sulfate, Bicarbonate and, Nitrate) were analyzed for the groundwater samples, according to their standard methods (Table 1).

Table 1. Instrumental and calculation methods for chemical analysis of the study area.

Results of the analytical data of groundwater samples and other parameters are shown in Table 2 and Figure 3. 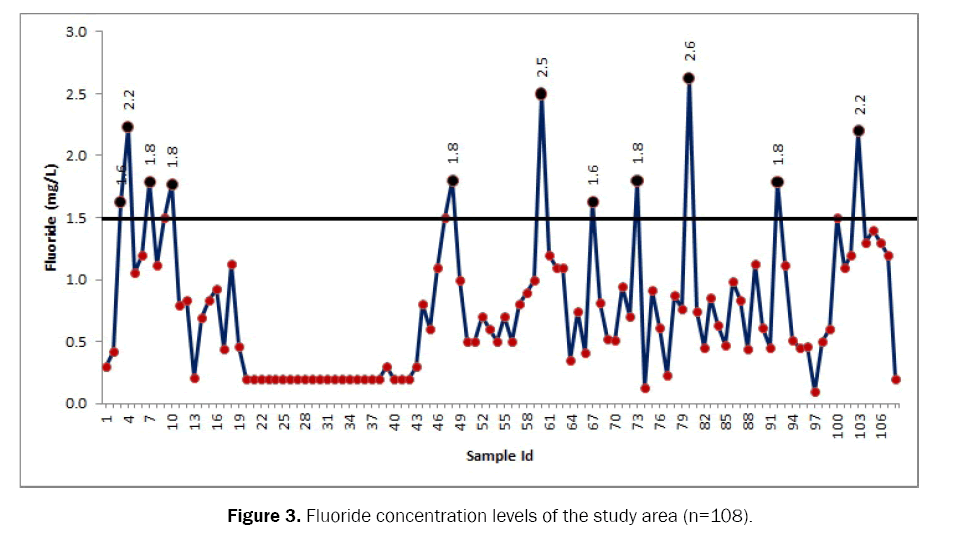 The pH ranges found 6.5 to 8.9 with mean of 7.4 (Table 2), indicating the alkaline nature of groundwater. Usually pH has no direct effect to human health, but the permissible range as certained by World Health Organization are 6.5 – 8.5. Water with lower pH is corrosive in nature. While, pH should be less than 8, it is effective with chlorine. EC of the irrigation water becomes one of the important parameters to evaluate the overall chemical quality of groundwater and it is being used to compare the waters with one other in any region. Based on EC the water could be classified as tasteless, sweet, brackish, saline and brine. In the study electrical conductivity ranges from 87 to 2279 lS/cm, respectively (Table 2), most of the samples under the permissible limit.

The TDS ranges found 56 to 1458.6 mg/L with means 321.5 (Table 2). In the study 13% of samples are belong to brackish type water (TDS 1000 mg/L). In the study total hardness is varying from 20 to 599 mg/L (Table 2), entire study area lies within the maximum permissible limit of 600 mg/L prescribed by World Health Organization. Based on total hardness classification of the groundwater designated as 75 (soft), 75–150 (moderately hard), 150–300 (hard), and above 300 mg/L (very hard), respectively. The analytical result indicates the water in the study area is moderately hard to very hard.

Sodium is an essential element for humans, all animals and, some plants. The sodium concentration in groundwater ranges from 5 to 161 mg/L respectively (Table 2). The permissible limit of sodium, in potable water is 200 mg/L, and none of the samples exceed the permissible limit. Potassium is chemically very similar to sodium. Potassium ions are necessary for the function of all living cells. Heavy crop production rapidly depletes the soil of potassium, and this can be remedied with agricultural fertilizers containing potassium, accounting for 95% of global potassium chemical production [15]. In the study potassium ranges from 0.8 to 31.2 mg/L with an average is 4.7 mg/L (Table 2).

Nitrate varies from 1.0 to 173.6 with mean of 39.4 mg/L (Table 2). In the study area which is notify the possible sources of nitrates are animal wastages and agricultural activities. The nitrate permissible limit in drinking water value is 45 mg/L prescribed by World Health Organization. In the study chloride range in the water samples was recorded from 16 to 461 mg/L with mean of mg/L (Table 2). In the study 6% is chloride levels exceed the permissible and, moreover the majority of groundwater shows concentration of chloride below the guidelines of World Health Organization 2012 is suggested maximum permissible limit 250 mg/L [16].

Table 3. Parameters in basalts, laterites, and granitic terrain of the study area (n=108). 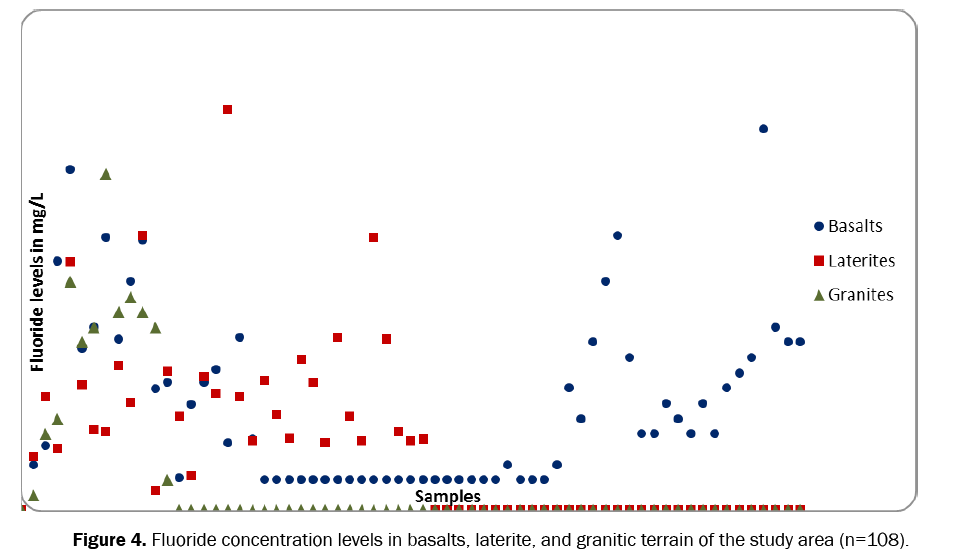 This research work was financially supported to Sanda Rajitha by University Grants Commission, Women PDF, New Delhi and, India. The first author would like to extent sincere thanks to Dr. M Ramana Kumar for his constant encouragement and support in the field work and as well as analysis work.