Phytonadione was formulated as a tablet for the treatment of vitamin k deficiency. Even though it is available in other dosage forms like emulsions for injections but it is difficult to handle, maintaining sterility and administration. So present study is to design a simple and novel method for the Formulation of Phytonadione tablets by using liquid-solid compaction technique and develop a dissolution media to meet the bioavailability.

Phytonadione tablets were prepared using Colloidal silicon dioxide as adsorbent and carrier to adsorb liquid API. Starch was used as disintegrate to achieve immediate release whereas Acacia used as binder which acts as both binding agent and emulsifying agent. All the formulations prepared were evaluated for various pre and post compression parameters. The selected formulation was subjected to stability studies at 30ºC and 40ºC. The following procedure for the formulation of tablets was found to be reproducible and stable. There is no loss of assay (99.2%) and final results are within the limits of standard. Therefore phytonadione tablets can provide an attractive alternative formulation to treat vitamin K deficiency.

Vitamin K is a fat-soluble, yellow color, clear and viscous liquid, which is insoluble in water, slightly soluble in ethanol and soluble in chloroform. It plays an important role in the blood clotting in which deficiency of vitamin K leads to excess bleeding and increases clotting time, which leads to hemorrhage. Vitamin K is responsible for the synthesis of cofactors II, VII, IX and X. This is only fat-soluble vitamin with co-enzyme function. It is absorbed through the lipid micelles through lymphatic system in the small intestine. As it is a fat-soluble vitamin requires bile salts for the absorption. Vitamin K triggers the process of blood coagulation by activating the synthesis of co-factors II, VII, IX and X. It is available mainly in the dosage form of injections which can be administered through Intravenous, Subcutaneous and Intramuscular. But all the time administration is not possible especially self-administration in case of emergency. To overcome these issues converting liquid API into a solid dosage form is preferable. The new liquisolid technique is applied to formulate liquid medications like oily drugs and solutions, emulsions or suspensions into powders suitable for encapsulation or tableting. Literature survey revealed that the novel technique which is used to convert a liquid into dry, free flowing powder and tablets is known as liquidsolid compaction technique. In this method carrier materials are used to saturate with liquid drug/ drug solution or suspension. After adsorption of the carrier material the surface is blended with fine coating materials. However, an extensive literature search did not reveal any dissolution media for estimation of drug release. Therefore an attempt was made to develop a formulation method and dissolution media as per ICH guidelines for the drug release studies [1].

Determination of solubility: Solubility of phytonadione was performed in various solvents like water, ethanol, methanol and chloroform. By adding drug to the vehicles and shaking on a shaker for 24 hrs the saturated solutions were prepared under constant vibration. Then these solutions were filtered, diluted and analysed by UV-spectrophotometer at 254 nm [2].

• Weigh all the ingredients according to the quantity per unit.

• Sift the intragranular portion of materials through ASTM #40 mesh

• Charge the sifted material into the Granulator.

• Add the liquid API under continuous mixing with the speed of impeller-95 and chopper 1400.

• Continue the mixing with speed of impeller-105 and chopper-1440 until the lumps are breakdown.

• Blend the above material by using extra granular portion in an octagonal blender which is sifted through ASTM #60 mesh.

• Compress the above blend into tablets by using rotary compression machine.

Preparation of phytonadione tablets: Phytonadione tablets were prepared by taking 5 mg of drug and mixed with aerosil 200 and di-calcium phosphate for 5 min. Then acacia was added followed by spray dried lactose and sodium starch glycolate for another 5 min. After that glidant and was added and blended for 10 min and then compressed by tablet compression machine [3].

Drug-excipient compatibility studies: In general while preparing a formulation of tablet, the drug may interact with other excipient as they are in close contact with each other. This interaction sometimes it may leads to instability of a drug. Therefore to know the compatibility between these materials FT-IR spectroscopy was employed (Figures 1 and 2). Potassium bromide was mixed with drug and/or other excipient in the ratio of 9:1 then spectra was taken. Then compare the both FT-IR spectra of drug and excipient (Figure 3) [4]. 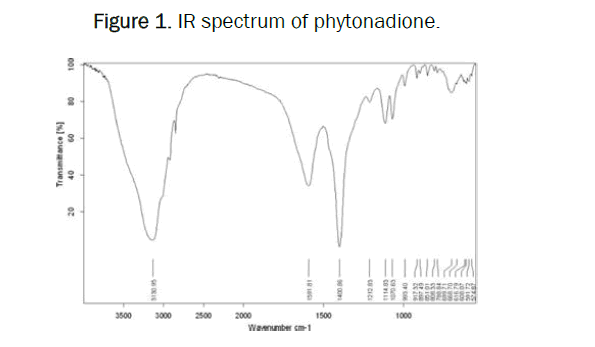 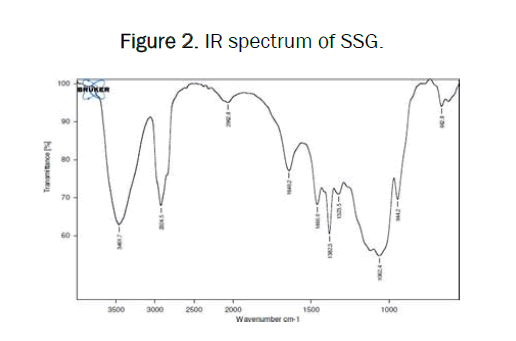 • Bulk density: The bulk density was performed for a granulated blend as drug is a liquid API and also to know the flow properties of a blend. 25 g of blend was placed in a 100 ml graduated measuring cylinder. Initial volume was observed and cylinder was tapped initially 200 times from a distance of 14 ± 2 mm. The tapping was continued for additional 500 times and then next tapping’s for 1250 counts.

The hausner ratio of the powder was determined by following equation. Hausner’s ratio=TD/BD
Post-compression parameters: The tablets after punching into tablets from every batch were evaluated for post compression parameters like Thickness, weight uniformity test, hardness, Friability, drug content, and drug release studies [6].

• Hardness and friability: Hardness is the measure of tablet crushing strength where tablets should withstand the mechanical shocks during manufacturing, packaging and shipping. Friability is determined by Roche friabilator. It consists of plastic chamber which revolves 25 RPM for 4 min. After the tablets are dropped, they are reweighed. And loss of tablet must be 0.5%-1% is acceptable.

• Weight variation: The average weights of the 20 tablets are calculated (Table 1) which are randomly selected. And the USP test passes only if NMT 2 tablets are outside the % limits.

Table 1. The average weights of the 20 tablets.

• Disintegration Test: This is the test used to determine the time taken for the tablets to breakdown into pieces in GI tract.

• In-vitro drug release studies: This test is used to measure the extent and rate of solution formation from dosage forms such as tablets, capsules etc. The dissolution of drug is important for its bioavailability and therapeutic effectiveness

The release rate of phytonadione from liquisolid tablets was studied using USP Dissolution Testing Apparatus. The dissolution test was performed in 1000 ml of pH 1.2 HCL buffer 3% SLS: Methanol (60: 40) at 37°C ± 2°C and 60 rpm. A sample (1 ml) of the solution was withdrawn from the dissolution apparatus at different time intervals and the samples were replaced with fresh dissolution medium. The samples were filtered and diluted to a suitable concentration. And absorbance of these solutions was measured at 254 nm [9].

Phytonadione tablets were prepared by taking drug, aerosil and DCP into a granulator and mixed for 5 min. Initially wet lumps were observed so the time of the granulation was increased for 5 more minutes and added the drug slowly under continuous mixing. Then acacia the binder was added to the above granulated blend followed by spray dried lactose and sodium starch glycolate which acts as super disintegrant. Then mg stearate and talc was added and final blend was compressed into tablets.

Initially the flow of the powder was very poor as it contains wet lumps and no proper mixing (Table 3).

Hence the bulkdensity, tapped density, hausner’s ratio and carr’s index values are out of the limits. After optimizing all the stages in the formulation and with proper mixing and increased the time of the mixing the flow property values are within the limits of good flow (Table 4). The good flow was achieved also by increasing the glidant add lubricants. 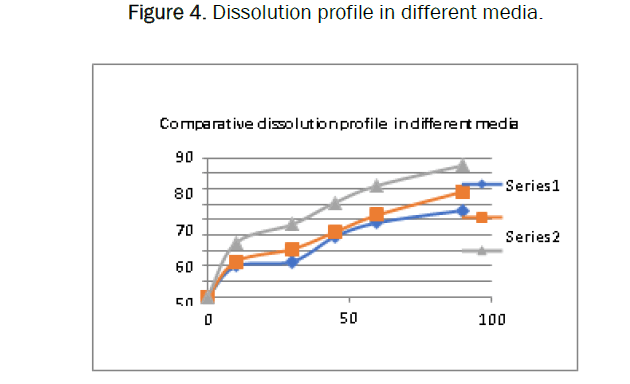 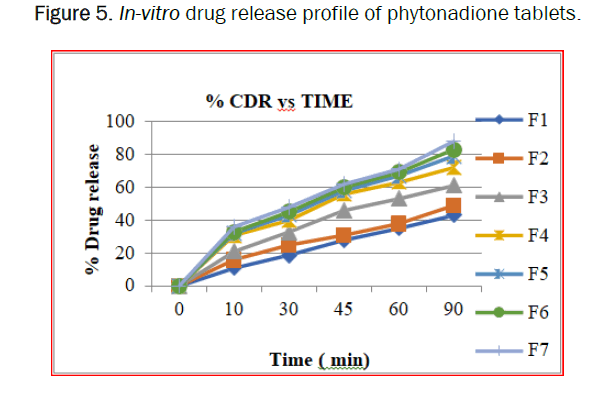 In the present study by using the combination of liquid API and excipients a novel formulation was developed known as liquid-solid compacts. Phytonadione tablets were prepared by liquid-solid compaction method because phytonadione is a liquid API. Phytonadione along with other excipients which are selected for the formulation were compatible and were confirmed by drug excipient compatibility studies. Prepared blend was evaluated for pre-compression parameters like bulk density, tapped density and Hausner’s ratio and then tablets were evaluated for post compression parameters like thickness, hardness, friability, disintegration and dissolution. All the formulations were evaluated and the formulation F7 was found to be the optimized formulation and this batch was loaded for the stability at accelerated stability conditions
(40 ± 2°C/75 ± 5% RH) and the formulation passed the evaluations. The results of the evaluations of the formulation proved that the phytonadione was best suited for the treatment of excess bleeding. Hence it was concluded that the formulation had a better drug release profile.