Buccal delivery of the desired drug using mucoadhesive polymers has been the subject of interest since the early 1980s. Advantages associated with buccal drug delivery have rendered this route of administration useful for a variety of drugs. The goal of the present investigation was to design and evaluate mucoadhesive buccal patches of rabeprazole which offers an attractive route of administration for systemic drug delivery. Rabeprazole (dose, 10-40mg) is proton pump inhibitor used in treatment of erosion and ulceration of the esophagus caused by gastro esophageal reflux disease. Its oral bioavailability is 52% metabolized in the liver by cyp-450 system2. The patches were prepared and evaluated for their thickness uniformity, folding endurance, weight uniformity, content uniformity, and In vitro release studies were conducted for rabeprazole loaded patches in phosphate buffer (pH, 6.8) solution.

Extensive research efforts have recently been focused on placing a drug delivery system in a particular region of the body for maximizing biological drug availability and minimizing dose-dependent side effects. Buccal delivery of drugs provides an attractive alternate to other conventional methods of systemic drug administration, since buccal mucosa is relatively permeable with rich blood supply and acts as an excellent site for the absorption of drugs [1].

The administration of drugs via buccal route facilitates a direct entry of drug molecules into the systemic circulation, avoiding the first-pass metabolism and drug degradation in the harsh gastrointestinal environment, which are often associated with oral administration.

The buccal cavity is easily accessible for self-medication. Hence it is safe and well accepted by patients, since buccal patches can be very easily administered and even removed from the application site, terminating the input of drug whenever desired. Moreover, buccal patches provide more flexibility than other drug deliveries3. Rabeprazole (dose, 10-40mg) is proton pump inhibitor used in treatment of erosion and ulceration of the esophagus caused by gastro esophageal reflux disease. Its oral bioavailability is 52% metabolized in the liver by cyp-450 system [2].

During last few decades, mucoadhesive polymers received considerable attention as platforms for buccal delivery of drugs due to their ability to localize the dosage form in the specific regions to enhance drug bioavailability.

Permeation Enhancers have demonstrated their effectiveness in delivering high molecular weight compounds, such as peptides, that generally exhibit low buccal absorption rates. These may act by a number of mechanisms, such as increasing the fluidity of the cell membrane, extracting inter/intracellular lipids, altering cellular proteins or altering surface mucin. The most common absorption enhancers are azone, fatty acids, bile salts and surfactants such as sodium dodecyl sulfate. Solutions/gels of chitosan were also found to promote the transport of mannitol and fluorescent-labelleddextrans across a tissue culture model of the buccal epithelium while Glycerylmonooleates were reported to enhance peptide absorption by a co-transport mechanism.

The buccal patches composed of combinations of HPMC, PVP and rabeprazole were prepared using a 40 cm2 modified glass mold by solvent casting technique. The polymer solutions were prepared separately and these polymer solutions were poured into drug solution slowly drop by drop and this both solutions were mixed. Permeation enhancers are incorporated in different formulations at different concentration (1%, 3%, 5%) Propylene glycol was incorporated as a plasticizer at a concentration of 7% w/w of total formulation and this solution was poured into a mold and closed with a funnel in an inverted position and allowed to dry at room temp at 350.C±0.50 C.

Evaluation of The Rabeprazole Buccal Patches

All the patches were visually inspected for colour, clarity, flexibility and smoothness.

For each formulation, three randomly selected patches were used. Six films from each batch, as a whole were weighed individually, and the average weights were calculated

The drug contents in the buccal patches were determined by dissolving 2 cm2 patch in 100 ml phosphate buffer (pH = 6.8) and shaken vigorously for 24 h at room temperature. These solutions were filtered through Whatman® filter paper (No. 42). After proper dilution, optical density was measured spectrophotometrically using a UV–VIS spectrophotometer (UV-1700 Double beam spectrophotometer, SHIMADZU Corporation, Japan) at 282 nm against a blank. The drug content was estimated from the calibration curve, which was constructed between 1 and 10 μg/ml concentration ranges.

The buccal patches were weighed accurately and kept in desiccators containing anhydrous calcium chloride. After 3 days, the patches were taken out and weighed. The moisture content (%) was determined by calculating moisture loss (%) using the formula

The instrument used to measure the tensile strength designed in our laboratory especially for this project work. The instrument is a modification of chemical balance used in the normal laboritar. One pan of the balance was replaced with one metallic plate having a hook for attaching the film. The equilibrium of the balance was adjusted by adding weight to the right pan of balance. The instrument was modified in such a way that the patch can be fixed up between two hooks of horizontal beams to hold the test film. A film of 2.5cm length was attached to one side hook of the balance and the other side hook was attached to plate fixed up to the pan as shown in the

B = breadth of the specimen in cm

t = thickness of sample in cm.

The polymeric films cut in to 1 cm x 1 cm were weighed accurately and kept immersed in 50 ml of water. The films were taken out carefully at 5, 10, 30, and 60 minutes intervals blotted with filter paper to remove the water present on their surface and weighed accurately the percent swelling calculated using formula.

where, W1 is the weight of buccal patch before dipping into beaker and

W2 is the weight of buccal patch after dipping in beaker and wiped.

The surface pH of the patches was determined to investigate the possibility of any irritation side, in-vivo, because an acidic or alkaline pH may cause irritation to the buccal mucosa. Therefore, the idea behind the test is to keep the surface pH as close to neutral as possible.

Patches were left to swell for 1 h on the surface of agar plate, prepared by dissolving 2% (m/V) agar in warmed phosphate buffer of pH 6.8 under stirring and then set aside till gelling at room temperature. The surface pH was measured by means of a pH paper placed on the surface of the swollen patch. 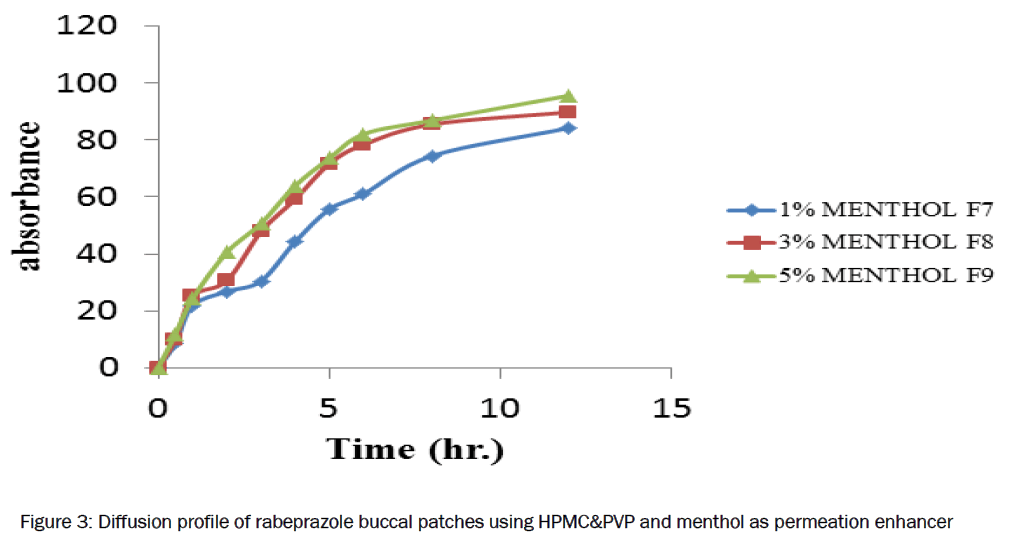 The in vitro drug release study was carried out using a Franz diffusion cell. The cellophane membrane was employed for the study. The effective diffusion area was 1.8 cm2. The receptor compartment (50 ml) was filled with phosphate buffer, pH 6.8. The patches were applied under occlusion on the membrane fitted between the donor and receptor compartments of the diffusion cell. The drug release was performed at 37 ± 0.5°C, at a stirring speed of 50 rpm using a magnetic stirrer. 1 ml of the sample from receptor medium was withdrawn and diluted to 10 ml, at regular intervals and replaced immediately with an equal volume of phosphate buffer saline, pH 6.8. The amount of rabeprazole released into the receptor medium was quantified by using UV–visible spectrophotometer at 282 nm against a blank.

Patches (1 x 2 cm2) were wrapped individually in aluminium foil and maintained at oven temperature (40±2°C ) and 75±5% RH for 1 month as per ICH guidelines. Apart from this the patches were also exposed to room condition (27 + 2°C) for 1 month. Changes in the appearance and drug content of the stored patches were investigated after storage.

The main goal of the present investigation efforts was to develop and evaluate new buccal patches comprising a drug-containing mucoadhesive polymeric layer using polymers like Gelatin PVP and HPMC and study the effects of permeation enhancers. The physicochemical evaluation indicates that all polymer combinations used for fabrication of buccal patches showed good film forming properties and reproducibility. The observation suggest that fabricated films were thin, flexible, elastic, yellow coloredsmooth and semi translucent the thicknessof these formulated buccal patches varied between 0.7± 0.034 (F 14) and 0.38 ± 0.07 mm (F 3). The weight variation of these patches varied between 89± 0.83 and 56 ± 0.67 mg.

Tensile strength proves the resistance power of the patch from breaking apart. Tensile strength was measured by using an instrument designed and developed exclusively for the project. It was observed that the tensile strength of various formulations is given in table.

Swelling behavior of the polymer patches contributes to their ability as prolonged release delivery systems. Good swelling index is also necessary for the effective muco adhesionIt was observed that the percentage swelling indices of various formulations are in the range of 33-42.

The selected formulation (F9) were subjected to short term stability testing. Films packedin bottles and kept in a stability chamber maintained at 40 ± 2 0C and 75 ± 5% RH for 1 month as per ICH guidelines. Changes in the appearance, surface pH, folding endurance, and drug content of the stored films were investigated after 1 month. The folding endurance and drug content of the formulation were found to be decreasing and are reported in the table no :5 . Percentage drug present in the films was determined by UV spectrophotometer. Table indicated that the drug loss was less though the films were stored for one month. Further there is a need of accelerated stability testing of these dosage forms to determine their shelf. Table 2: Data of weight variation, thickness and folding endurance of the formulations 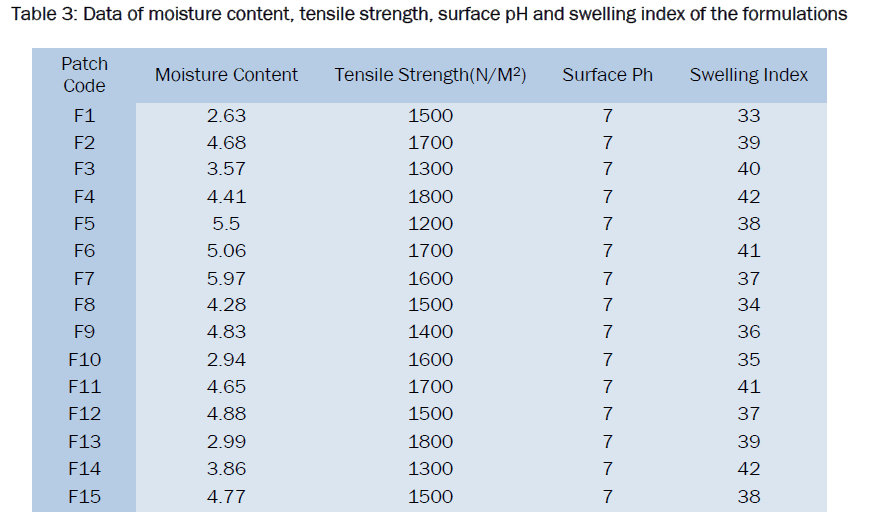 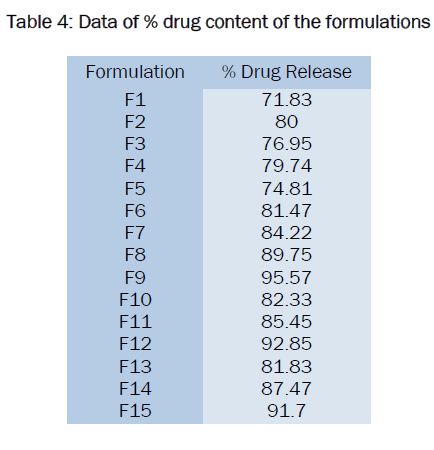 Buccal patches of rabeprazole using polymers like gelatin HPMC and PVP showed satisfactory physicomechanical and mucoadhesive characteristics. The proportional amounts of various permeation enhancers in various formulations have influence on drug release from these formulated rabeprazole buccal patches. From the present investigation, it can be concluded that such buccal patches of rabeprazole may provide buccal delivery for prolonged periods in the management of gastro esophageal reflux disease, which can be a good way to bypass the extensive hepatic first-pass metabolism.