Oluwa river winds through many communities in Ilaje Local Government Area in south-south of Ondo State, has a coastline of about 80 km with about 50 settlements scattered around the river (tributaries that empty directly into the coast), with an increasing population size of 2.2% annually [1]. Oluwa river is used for artisanal fishing activities, transportation, domestic purposes as well as mining of silica and sand. Despite the increasing anthropogenic influences occasioned by the rapid development of Ilaje communities as one of Niger Delta areas, there is a dearth of information on the composition, abundance, and diversity of benthic macroinvertebrates of the river. Macro-invertebrate organisms form an integral part of an aquatic environment and are of ecological and economic importance as they maintain various levels of interaction between the community and the environment [2], Knowledge of the structure of benthic macroinvertebrates community provides precise and local information on recent events, which can be seen in their structuring [2]. This study report for the first time the composition and diversity of benthic macroinvertebrates of Oluwa river, in Ilaje local government area, Ondo State.

The study was conducted on Oluwa river at Ilaje Local Government Area (ILGA), Ondo State, Nigeria. The river lies on latitude 40.40/-50.00//N and longitude 60.00/-60.20//E (Figure 1). The annual rainy season occurs from April to October with a characteristic ‘August break’ during which rainfall abates, while the annual dry season occurs from November to March. Meteorological conditions within ILGA are as follows: mean daily minimum temperature (22.1-24.4°C); mean daily maximum temperature (24.9-36.8°C); total precipitation (125.2-278.5 mm) and mean relative humidity (76-88 mm) [3]. ILGA is in south-south of Ondo State with a coastline of about 80 km which runs in a northwest to southeast direction. The vegetation of the study area is mangrove forest with small evergreen broadleaves trees. The tallest trees are emergent about 40 m in height followed by the upper canopy about 20 m. Common mangrove trees include Avicennia sp., Rhizospora sp. and Pandanus sp. [4]. 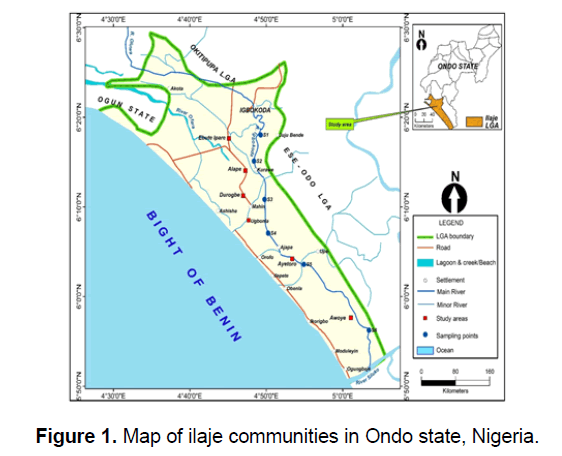 Six sampling stations (1-6) were chosen on the Oluwa river. The distance between the stations was 500-1500 m and they were purposively selected based on the human activities in the area.

• Station 1: at Ebute-Ipare had less human activities. There were farming activities involving oil palm trees (Elaeis guineensis) plantations and planting of cassava crops in the area

• Station 2: Alape, which was about 500 m from Station 1. The major activities in this area were the construction of canoes and mat-making. Stations 1 and 2 represent the upstream

• Station 3: This was at Durogbe Park, which was about 700 m from Station 2. Passengers board the canoes and engine boats to their various destinations on the river. Some of the vehicular wastes from engine boats were released into the river. There was a market around this station where the fishermen and fish sellers sold their fishes on the terminus under which were the dumpsites. This served as a source of organic wastes into the river. Some of the passengers also used the shores of the river as their public toilets

• Station 4: This was at Ugbonla; about 500 m from Station 3. There was deposition of wastes in this place. The inhabitants used this water for bathing, washing and also release wastes, such as cassava peels and palm kernel into the river. Also, sand mining activities were not left out around this station. Stations 3 and 4 represent the midstream stations

• Station 5: Ayetoro Town is about 600 m from Station 4 with residential buildings; business activities such as selling of fish, baskets, mats, and local gins take place. The market men and women use the shore of the river as their public toilets, as most of the houses around this place lacked toilet facilities

• Station 6: Awoye was about 1500 m from Station 5. There are farming activities and local gin production. Floating plants, such as water hyacinth (Eichhornia crassipes), covered the station during the rainy season. Stations 5 and 6 represent the downstream stations

Samples of benthic macroinvertebrates were collected monthly from the six sampling stations from June 2014 to November 2015 using a Van Veen grab (0.6 m2 surface area). Three random replicate hauls of sediments were taken from each station. Each sediment sample was diluted with water and sieved with a 0.5mm mesh size sieve in the field [5,6]. The sorted benthic macroinvertebrates were preserved in 4% formalin in small glass jars. The individual organisms were identified macroscopically with the following guides and keys [7-11]. Spatial variations in benthic macroinvertebrates abundance were determined using the one-way Analysis of Variance (ANOVA). Shannon-Wierner diversity index and evenness were determined using PAST software

Table 1. A checklist of benthic macro-invertebrates recorded from Oluwa river from June, 2014 to November, 2015.

The Diversity of Benthic Macro-Invertebrates in Oluwa River

Table 4. The diversity of benthic macroinvertebrates in Oluwa river.

Higher relative abundance of pollution indicator species (including Pachymelanin aurita and P. fusca) encountered in Oluwa river could be attributed to organic pollution from dump sites along the shore of the river. Perhaps, these are not unconnected with a decline in the water qualities observed in the area, such as low DO Esenow and Ugwumba [13]. The organic pollution tolerant species found in this river are morphologically and physiologically adapted to surviving conditions of low water quality. These forms of include possession of pigment hemoglobin, which gives affinity for oxygen even at very low concentration Pertet et al. [17]. Gastropods are known to be relatively tolerant of physical and chemical variations in the environment and are usually present in a broad range of habitats [18]. Ajao and Fagade [19] also recorded gastropods as the dominant benthic fauna in Lagos Lagoon. Pachymelania aurita recorded the highest percentage abundance during the study period. A similar observation was made by Chukwu and Nwankwo [2] in Port Novo Creek. This is not unconnected with their ability to cope with decline water quality.

Species abundance and diversity were low, especially when compared with the other studies in Nigerian inland water. This study recorded the lower Margalef index of 0.58 in the study area. Conversely, Sikoki and Zabbey [20] recorded Margalef index of 2.39 and Ogbuagu [21] recorded 1.13 in the same Imo river; also Akindele and Liadi [15] recorded Margalef index of 2.89 for macro-invertebrates in Aiba stream, Iwo, south-western Nigeria. Other than from natural processes, anthropogenic perturbation has been known to threaten and exacerbate biological diversity losses [22]. Global biodiversity in freshwaters has also been reported to be on the decline [23]. Harrison and Stiassny [24] have identified habitat modification as exerting the most influence on aquatic biodiversity richness. Spaak and Bauchrowitz, [22] view sand mining as a major habitat modifier for aquatic biota. In-stream sand mining could impoverish aquatic sediment of essential nutrients necessary for a healthy and thriving biological community. The sand-mining activity could have contributed to the low value recorded in this study area.

Shannon-Weiner diversity index values above 3.0 indicate that the structure of the habitat is stable, while values less than 1.0 indicate that there are pollution and degradation of the habitat structure [25,26]. Margalef’s water quality index values less than 1.0 indicate severe pollution and intermediate values indicate moderate pollution [27]. Based on the diversity indices values (0.58, 0.60 and 0.61) obtained in this study, Oluwa river can be regarded as being slightly polluted.

Some important factors governing the abundance and distribution of macrobenthic communities include water quality, immediate substrates for occupation and food availability [28]. Any ecological imbalance arising from any severe alterations of these factors may affect the macrobenthos. Therefore, it appears that the macrobenthic community abundance, composition, and diversity might have been greatly affected by stress imposed by land-based pollutants, as well as substrate instability possibly arising from frequent deposition of organic wastes in the river.

One important macro-invertebrate community indicator is EPT richness, or the total number of Ephemeroptera (mayfly), Plecoptera (stonefly) and Trichoptera (caddisfly) taxa in a sample. An increasing EPT richness value correlates with increasing water quality [29] and many studies have indicated that Ephemeroptera, Plecoptera, and Trichoptera show a strong negative response to anthropogenic disturbances in aquatic ecosystems [30]. Although caddisfly was present in all the stations with low abundance, the absence of Ephemeroptera and Plecoptera throughout this study period is an indication that the river is of low biological water quality.

Gastropoda were the predominant taxa at Oluwa river during the period of study; followed by Polychaeta>Insecta>Crustacea>Oligochaeta. Pollution indicators species, such as Chironomus larvae, Glycera capitata, Nereis diversicolor, and Pachymelania aurita, were encountered in all the stations, suggesting pollution in the stations.