Due to the increase in population and the demand for food supply there has been an increase in irrigation and construction of dams, these have aided the spread of schistosomiasis.

Materials and Method: A total of 150 specimens were collected within the periods of October to December 2010. Urine specimens were examined for eggs of Schistosoma haematobium by sedimentation technique. Participant’s demographic information was obtained by questionnaires. Data obtained were age and gender.

Results: Out of 150 urine specimens examined 28 (18.7%) were positive for Schistosomiasis haematobium. The highest prevalence of infections were recorded among participants within the age group of 21-30; 11 (19.0%), There was no significance difference in the occurrence of infection in relation to age group (P>0.05). Male participants had a higher prevalence 27 (18.9%) compared to their females counterparts 1 (14.2%) although, the relationship between rate of infection and gender was not statistically significant (P>0.05). Deyi village recorded a higher prevalence of 23 (20.0%) compared to Zawan village 5 (16.7%).

Conclusion: The study has revealed the presence of Urinary Schistosomiasis in Deyi and Du villages of Jos South L.G.A. Therefore we advocate government intervention especially in the area of chemotherapy of infected persons with praziquantel, regular screening of people who are at risk of contracting infection and public health awareness with respect to disease transmission as these will go a long way to halt the cycle of infection.

Schistosomiasis also known as bilharzia, is one of the ten (10) tropical diseases targeted for control by United Nation Development Program, the World Bank and the World Health Organization [1].

Urinary schistosomiasis remains one of the most important parasitic diseases indicated by the presence of blood in the urine. About 200 million people are infected worldwide with 131 million in sub-saharan Africa [2]. However, 120 million are symptomatic and 20 million have debilitating disease [3].

Irrigation farming is an important water contact activity with high economic benefit. Irrigation farmers frequently come in contact with water which predisposes them to come in contact with the cercariae of schistosomes. The exposure patterns could be associated directly with irrigation, Fishing and swimming in river stream or dam, washing after farm work and cleaning vegetables in canals [4].

Infection by cercariae of schistosomes can be controlled by provision of latrines, the introduction of effective sewage disposal system and provision of civilized swimming pools recreation activities are good control measures to curb the spread of the diseases. In addition wearing of footwear prevents penetration by cercariae of the schistosome [5].

The study was carried out in Deyi and Zawan villages of Du districts of Jos South L.G.A. Jos south is a Local government area in Plateau State North Central Nigeria. Its headquarters are in the town of Bukuru on latitude 9047' 59.99" N and longitude 8051' 59.99" E. It has an area of 5,104 km2 and population of 306,716 at the 2006 census. The local government area is divided into four districts of Du, Gyel, Vwang and Kuru. It is an upland area with undulating hills, mountain, outcrops, forest reserves, mining ponds rivers, settlements, fertile agricultural land for dry and raining season farming. The main preoccupation of the people is both subsistence and commercial agricultural production.

The study population consists of 150 farmers from Deyi and Zawan Villages of Du districts of Jos South L.G.A of Plateau State, North Central Nigeria. Were terminal urine samples were collected in a clean, opening, screw capped transparent, dry and sterile containers from the farmers. The study was conducted within the periods of October to December, 2017.

Ethical clearance approval was sought and obtained from Plateau state ministry of health. Prior to specimen collection informed consent were obtained from subjects. Information obtained was kept confidential and used only for this research.

Questionnaires were administered to subjects who consented to participate in the study and information obtained were age and gender.

One hundred and fifty urine specimens were obtained from farmers in the study area. They were transported to Federal School of Medical Laboratory Technology, Jos, for analysis. 10 ml of each of the specimens were transferred into centrifuge tubes, the specimens were centrifuged at 2000 g for 5 min. After centrifugation, the supernatants were discarded and the sediments re-suspended and wet preparation of the sediments were made and examined microscopically placed on microscope slide and were examined for the presence of egg of Schistosoma haematobium using x10 and x40 objectives respectively.

Figure 1 depicts the occurrence of urinary schistosomiasis based on study area, results shows that the infection was higher in Deyi village 18 (20.0%) than Zawan 10 (16.7%). 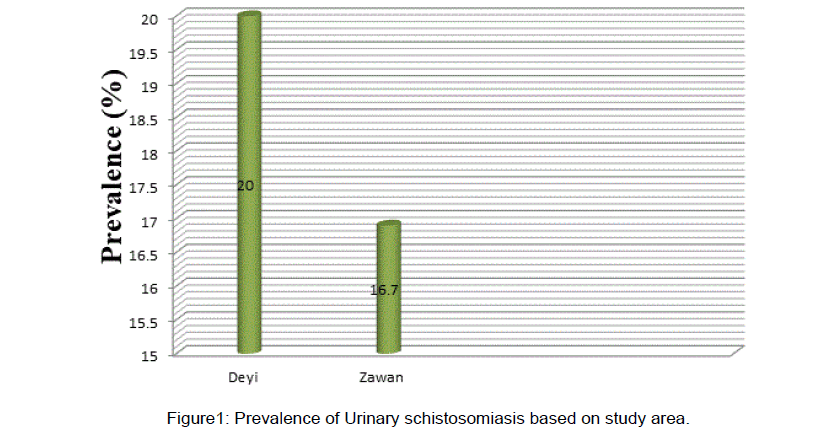 Figure 1: Prevalence of Urinary schistosomiasis based on study area.

Farmers in Plateau state are mostly involved in irrigation farming because of the presence of mining pond which serves as source of water for irrigation. Irrigation farming favours the cultivation of vegetables such as tomatoes, pepper, onions, cabbage carrots etc.

The present study was targeted on irrigation farmers because of the associated risk with Schistosomiasis [6]. The study has revealed the presence of Schistosoma heamatobium in the study area. Although the prevalence is low compared to other related studies elsewhere reported 42.2% in Yauri a riverine area of Kebbi state and rice farming communities of Biase area of Cross River respectively [7,8]. The difference in the prevalence is largely attributed to the difference in geographical location, weather and climatic conditions of the study areas. However, the low prevalence observed in this study could be as a result of health interventions.

According to the age related prevalence, the age group of 21-30 years has the highest prevalence for the overall infections 11 (19.0%) of 150 samples examined were positive. This is contrary to the work of who reported the age group of 15-19 yrs as the most heavily infected age group in his study of prevalence of S. heamatobium and S. mansoni in Government High School, Ilorin Kwara State [9]. The outcome is also contrary to the work of who also reported the highest prevalence of urinary schistosomiasis of 17.2% in the age group of 13-14 yrs in Bauchi State, Contrary to this outcome [10-12]. This work however was related to one occupation (irrigation farming) and most people who engage themselves in irrigation in the area fall in the age group of 20-30 yrs. Only a few of those aged below 21 yrs engage themselves in irrigation farming inthe area and as such are less prone to the infection compared to the 21-30 yrs age group.

We recorded the highest prevalence in Deyi village despite intervention through mass chemotherapy in the area. This could be due to the movement of immigrants to the community from neighboring states for irrigation farming which might lead to re-introduction of the infection.

This study has revealed the presence of urinary schistosomiasis in Deyi and Zawan community in Jos South Local Government Area of Plateau State. However, Deyi community despite chemotherapeutic intervention still recorded higher prevalence. We therefore advocate continuous surveillance by way of identifying, testing and treatment of immigrant farmers in the community. In addition, governmental and non-governmental organization should give more attention through mass treatment, increase in public health awareness and provision of basic amenities in a view to eradicating this disease.

We make the following recommendations for the control of the high level of urinary schistosomiasis in the study subjects as follows:

• We recommend enlightenment campaign on the route of transmission of urinary schistosomiasis in the study area.

• Mass chemotherapy of the irrigation farmers is advocated.

• The use of moluscide for the destructions of intermediate host in stagnant water used by irrigation farmers.

• Provision of pipe borne water or bore hole to be used by irrigation farmers.