Screw Impacted in a Deciduous Tooth

Antibiotic prescription is still a rising trend in the dental profession and, unfortunately, misconceptions regarding wrong antibiotic prescriptions still exist today. Intraoral sinus tracts associated with chronic dental infections are quite common in the dental setting. Due to the fact that these lesions are associated with a chronic abscess, a high percentage of dentists still find it appropriate to prescribe antibiotics thinking that this will arrest and treat the chronic lesion. Prescription of antibiotics should be carefully reviewed before it is deemed necessary. Oral health professionals should be aware of, and comply with the evidence-based recommendations in order to fight antibiotic misuse in situations where they are not recommended. This brief paper aims to review chronic periapical abscesses associated with dental sinus tracts and seeks to remind why pharmacotherapy should not be a treatment option of this specific pathology.

The chances of finding foreign bodies inside carious lesions is more commonly seen in children, who often exhibit a tendency to insert, bite or swallow small objects [1]. Most of the time, these cases are diagnosed accidentally on radiographic examination of the tooth. The presence and location as well as type foreign body can only be determined by a thorough clinical and radiographic examination. Here we present a case of a foreign body found inside the pulp chamber of a mandibular deciduous second molar in a five year old boy.

A five year old male patient (Figure 1) reported to the Department of Oral Medicine with the chief complaint of pain in the lower left deciduous second molar. The pain was noticed since three months. On clinical examination dental caries were noted in 74 and 75 were grossly decayed and there was lodgement of food debris in 75. The tooth was tender on percussion. When the removal of the food debris a dark coloured object was seen wedged into the pulp chamber (Figure 2) which felt hard on probing. An intraoral periapical radiograph of 75 was taken (Figure 3) which revealed coronal radiolucency extending to the pulp with a radioopaque object resembling a screw within the pulp chamber (the head of the screw facing the floor of the pulp chamber). A panoramic radiograph was also taken (Figure 4) which confirmed our findings and ruled out the presence of any other foreign bodies in the patient’s dentition. 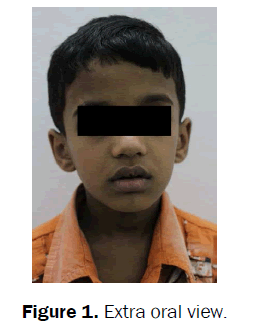 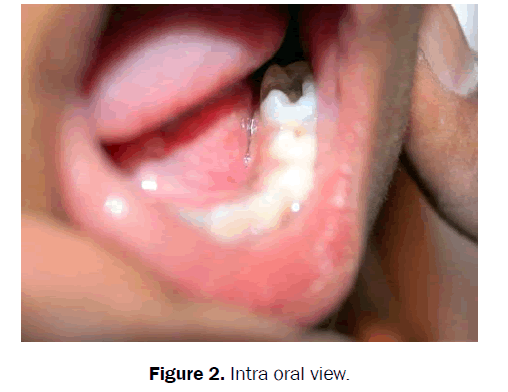 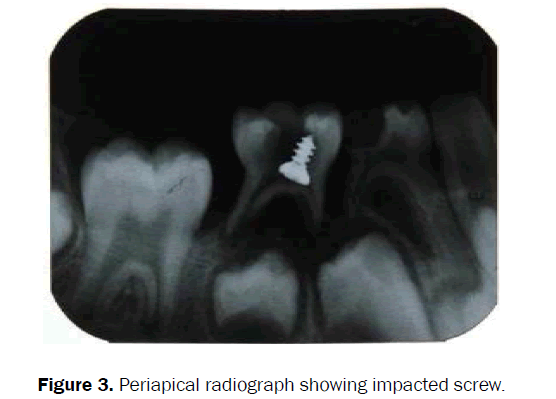 An ultrasonic scaler was used to effectively clear the remaining debris and provide better visibility. The screw was removed with the help of tweezers (Figure 5) and the tooth was later restored endodontically. 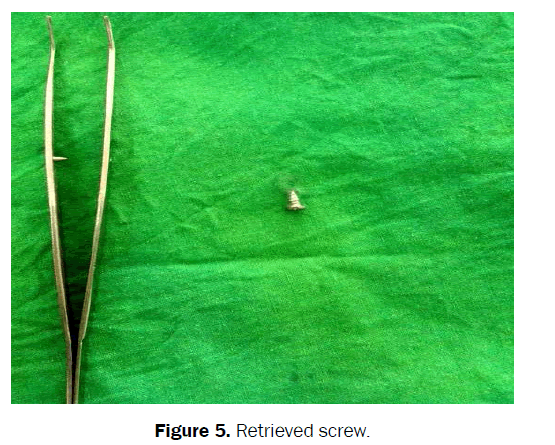 Children tend to insert various objects into their mouth accidently or intentionally and these tend to get lodged within carious lesions, often those with a large pulpal exposure. These objects may remain lodged for extended periods of time either due to the child’s lack of knowledge or because of his or her apprehension to reveal the problem to their parents. In our case the patient was unaware of having inserted anything into the tooth. In most cases a routine radiograph is what reveals the presence of such foreign bodies. A glance at the available literature reveals an extensive and interesting list of objects retrieved from carious dentition including metal screws [2], staple pins [3,4], darning needles [5], pencil leads [6], beads [7], plastic objects, toothbrush bristles and crayons [8-10]. These objects may act as a potential source of infection and teeth with embedded foreign bodies often present with infection, pain, swelling or recurrent abscesses which are a result of the pulpal exposure.

As mentioned earlier in younger children embedding of foreign objects in teeth is usually accidental, but when dealing with such cases in adolescents, we have to consider risk-taking or attention seeking behaviour, or substance abuse as possible influences. Selfembedding behaviour (SEB) is most often misdiagnosed or overlooked, is a form of self-injurious behaviour which involves the insertion of foreign objects into the bodily tissues, either under the skin or into muscles [11]. The present case report is suggestive of accidental insertion of screw and not associated with any self-injurious habits.

Retrieval of foreign objects from within pulp chambers and root canals can be done with the help of a simple instrument such as tweezers as we did in our case. In the event that it is necessary to localize the object, various radiographic methods have been suggested for localisation [3], such as Parallax views, Vertex occlusal views, Triangulation techniques, Stereo Radiography and Tomography.