Search for an Herbal Medicine: Anti-Ulcer Activity of Methanolic Extract of Haldina cordifolia.

In this study, we were determining the anti-ulcer effect of Haldina cordifolia in NSAID induced rats. The methanolic extract was given orally 100mg/kg and 50 mg/kg body weight at 8 hrs interval. Diclofenac sodium was used as the inducing agent for the ulcer. The result was satisfactory as there is a marked improvement in the ulcerated part. The extract was able to decrease the acid secretion in stomach and increase the mucosal damage.

Herbalism or "herbal medicines” have a long history to cure several kinds of human diseases from the various parts of the plants such as leaf, stem, bark, root, etc. [2] Plants have been the basis for medical treatments through much of human history, and such traditional medicine is still widely practiced today. Modern medicine recognizes herbalism as a form of alternative medicine, as the practice of herbalism is not strictly based on evidence gathered using the scientific method. Many of the pharmaceuticals currently available to physicians have a long history of use as herbal remedies, including opium, aspirin, digitalis, and quinine. The World Health Organization (WHO) estimates that 80 percent of the population of some Asian and African countries presently uses herbal medicines for some aspect of primary health care. The use of, and search for, drugs and dietary supplements derived from plants have accelerated in recent years. Pharmacologists, microbiologists, botanists, and natural-products chemists are combining the Earth for phytochemicals and leads that could be developed for treatment of various diseases. Among the 120 active compounds currently isolated from the higher plants and widely used in modern medicine today, 80 percent show a positive correlation between their modern therapeutic use and the traditional use of the plants from which they are derived. More than two thirds of the world's plant species at least 35,000 of which are estimated to have medicinal value come from the developing countries [1].

It was realized from the various reports that Haldina cardifolia, belongs to the family Rubiaceae, have displayed plethoras of potential biological activities such as anticancer, hepatoprotective, anti-inflammatory, antifertility, antidiabetic, antiamoebic, antinociptive etc. from its various parts [2-9]. Furthermore, this plant have also used in curing various ailments such as rheumatism, stomachache,headache, cold/cough, toothache, fever, pain and swelling, bacterial infection, urinary problems, conjunctivitis, miscarriage etc [10-20]. Keeping the view of the above mentioned medicinal importance of this plant, we therefore became interested to investigate the antibacterial activity of this plant. To the best of our knowledge, the antibacterial activity from this plant has not been reported so far till now. In the present paper, we would like to explore the antibacterial activity of the methanolic extract this plant employing various kinds of strains. It was found that majority of these strains employed, have displayed potential antibacterial activity.

Introduction to the plant A hulking deciduous tree with the shoot often irregularly fluted and buttress at the bottom and normally reaching 6m girth and 15-35m in height. It is a blossoming plant in the family Rubiaceae. Bark to a degree dark grey, thick, bumpy or blackish and to a certain extent pale ashy or silvery white, wood yellow moderately rigid and even-grained. Leaves opposite 10-25cm width, orbicular, abruptly acuminate, pedestal cordate, glabrous above pubescent beneath, with 5-8 pairs of sideways nerves. Petiole 3.8-10cm extended stout, juvenile. Stipules 1.3-1.8cm long oblong or obovate. Flowers is irrelevant individually but is very attractive when they blossom together in balls with a perimeter of 2 to 3cm. They are usually yellow in shade often tinged with a shade of pink. Fruits capsules split into two dehiscent cocci. Seeds many slender small tailed above.

The plant material used in this learning is the dried leaf of plant Haldina cordifolia which is collected from the Puri district of Orissa state of India, Was authenticated in the Department of Botany, Utkal University, Bhubaneswar. Fresh leaves were washed in running water, shade dried and crushed to fine powder.

The powdered leaves were defatted using petroleum ether using Soxhlet apparatus for 48 hrs. The resulted marc was further extracted with methanol by Soxhlet apparatus for 72 hrs. The extract was then filtered and evaporated to dryness in vacuum. The yield of Methanolic extract was calculated and it was found to 4.5%.The marc left behind was kept in refrigerator for further use.

Dose Selection and Mode of Administration

All the groups of experimental animal were kept for during the night fasting fed only with the t Water. The animals of cluster 3, 4, 5 and 6 were treated with the sample extract different doses. This action was given thrice at the 12 hours interval. Animals of group 7 were treated with cemetidine simultaneously. After one hour of final administration of sample extract the NSAID was prearranged by Oral gavages to group 2 to group 7 animals. After 6 hours of NSAID administration, the animals were sacrificed by cervical dislocation [22].

The animals were dissected and the stomach was in use out. Finally the ulcers were observed macroscopically. The surveillance was made for any bulging or inflammation in the stomach. The Stomachs were opened along the greater curvature and the mucosa was exposing for evaluation. The ulcer scores (US) were calculated as the arithmetic mean for each treatment

The protection mechanism of the gastrointestinal mucosa against ulcerative factors such as HCl, bile acid and NSAIDs, mainly consists of functional, humoral and neuronal factors. Act as functional factors- Mucus-alkaline secretion, mucosal microcirculation, and motility, humoral factors- prostaglandins and nitric oxide neuronal factors- capsaicin sensitive sensory neurons. In ongoing experiments, it has been found that heat shock proteins (HSPs), specifically HSP70 and HSP47 are involved in the gastric protection. The HSC70 (a constitutive form of HSP70) is co precipitated with COX-1 and the neuronal form of nitric oxide synthase after treatment with a mild irritant (30% ethanol). A positive relationship between enhanced interaction of HSC70 with either Cyclooxigenase-1 or nitric oxide synthase and mucosal defense mechanisms and ulcer healing, most probably through protecting key enzymes related to cytoprotection [23].

Pretreatment with the mangrove reflect a clear tendency to increase PGE production in spite of NSAID- induced depletion, at the considerably high dose of Diclofenac used (100 mg/kg) [3]. These results may be attributed to the polyphenolic compounds found in the mangrove plants. Phenols stimulate PGE formation based on their action as co substrates for the peroxides reaction [24]. Since the leaf extract of Haldina cordifolia also has the protective effect on the stomach against NSAID- induced gastric ulcer and this may attributed to polyphenolic compounds.

The evaluation of the anti-ulcer effect of Rhizophora mangles bark on the gastric ulcer induced by using ethanol-hydrochloric acid in rats which causes the mucosal damage in it. They have used the drug cimetidine as standard. The effect of these agents on the quality and quantity of the gastric mucus were also determined by giving oral dosage of the aqueous extract of the sample at different dose. Oral doses at 500 mg/kg body weight gave the highest level of gastric protection. Mucus content increased, accompanied by a proportional increase in proteins. In this present study, positive control (Diclofenac Sodium) was caused damage on the glandular mucosa (2.40±0.37).

On the other hand, tannins may prevent ulcer development due to their protein precipitating and vasoconstricting effects. Their astringent action can help precipitating microproteins on the ulcer site, thereby forming an impervious layer over the lining that hinders gut secretions and protects the underlyinjg mucosafrom toxins and other irritants. This propensity to bind with proteins also explains the fact that polyphenols inhibit enzymes tested in vitro. The major active principles of the red mangrove are polyphenols, represented in their majority by polymeric tannins (80%) and hydrolysable tannins (20%) and catechin, chlorogenic, Gallic and elagic acids as well as gallotannins, elagitannins and condensed tannins. These substances characterized by their polyphenolic nature, have shown cytoprotective properties and have been associated to antiulcerogenic activity in other plants. Since H. cordifolia also had shown same but less anti-ulcer activity in comparisons to Rhizophora mangle. So, it may be considered that H.cordifolia also have tannins or polyphenolic compounds which are responsible for its anti ulcer property. In this study, contrast to it the pretreatment with hot water and cold water extract, at doses of 55.5 mg/kg and the body weight 120kg decreased the ulcerated area to high dose-cold extract (1.170± 0.35) and high dose-hot extract (1.015±0.205), followed by low dose-cold extract and low dose-hot. This was compared to the effect exerted by standard control (Omeprazole) (0.735±0.185) (Table 1). 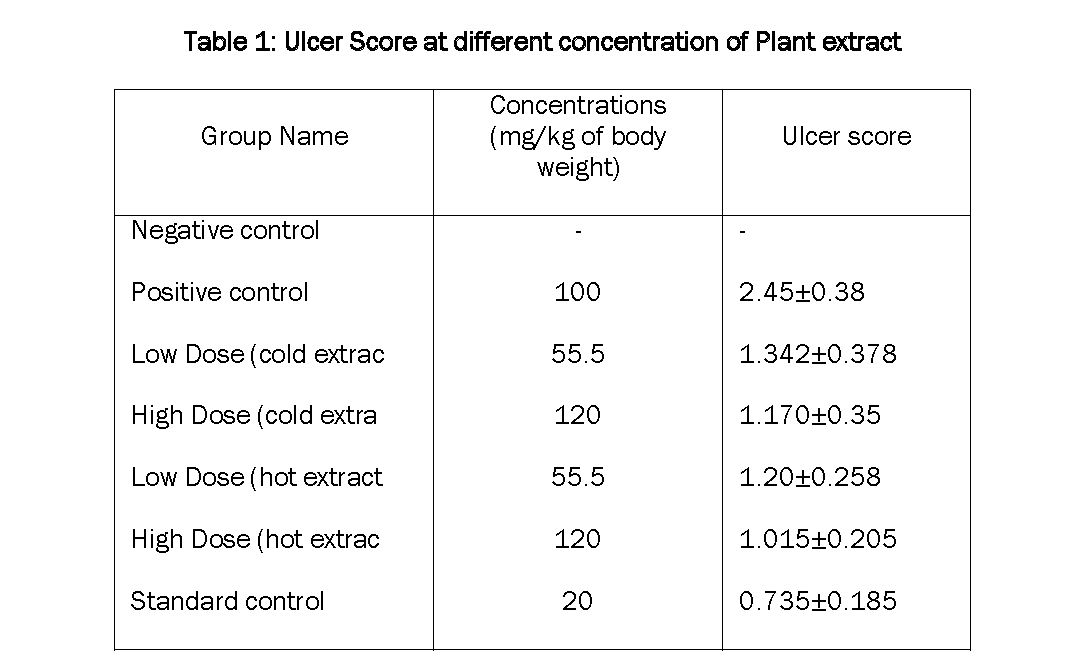 Based on the comparison with the R. mangle it is expected that the wound healing capacity of Haldina cordifolia during ulcer is due to several mechanisms, such as coating the wound, forming complexes with proteins of cell wall, chelating free radicals and imprudent oxygen species, stimulating the retrenchment of the wound and increasing the formation of new capillaries and fibroblasts.

The present study showed that pretreatment with the leaf extract (both hot water and cold water) of Haldina cordifolia caused a beneficial effect on NSAID- induced gastric ulcer in rats as evidenced by the reduction in the ulcer score.