2Research Fellow of the Japan Society for the Promotion of Science, Japan The intestinal microbiota is a diverse ecological system that modulates the enteric environment and affects the health of the host. Supplementation with fermented materials containing probiotics, prebiotics and biogenics is a promising strategy to control intestinal microbiota; however, there have been few attempts to demonstrate the efficacy of fermented products in veterinary medicine. In this study, we investigated whether a new active supplement originated from fermented milk can improve the enteric environment and skin conditions of dogs with skin disorders, including dry skin, mild eczema, and pruritus. Nine dogs were subjected, and either a supplement containing fermented milk with milk phospholipids (MPL) or a placebo was administered for 4 weeks. After a 2-week washout period, the treatment protocol of the groups was switched. We found that the amount of indole and acetic acid in faeces were significantly reduced in the dogs that received supplements containing fermented milk with MPL compared to the dogs that received the placebo. The pruritus visual analog scale score, which reflects itch behaviors, was also improved. The results indicated that supplementation of fermented milk with MPL improved the enteric environment by reducing abnormal decomposition, and improved the skin conditions of dogs with allergic skin disorders

The intestinal microbiota is a complex ecosystem that contains hundreds of microbial species [1]. Accumulating evidence suggests that it affects the physical condition of the host and can be an exaggerating factor in cutaneous diseases; for example, it has been reported that microbial diversity in the intestine is inversely correlated with the severity of allergic diseases [2,3]. Supplementation with probiotics is a well-recognized approach to modulate the enteric environment and alter the intestinal microbiota. Many attempts to change the enteric environment with food have recently been examined [3], although fewer studies in veterinary medicine have been reported [4]. Since beneficial effects of not only probiotics but also prebiotics and biogenics have been described [5], the importance of fermented products on our health is recognized.

Impaired skin conditions such as dry skin trigger other pathological abnormalities, including pruritus and eczema. Recent findings suggest that oral administration of milk phospholipids (MPL) such as sphingomyelin may improve skin conditions after absorption and incorporation into the skin, converting it to cutaneous ceramide [6,7]. As supplementation of fermented milk increases the absorption of sphingomyelin [8], we hypothesized that the combination of fermented milk with MPL can be an effective supplement to improve enteric and cutaneous conditions. To investigate the issue, we generated a new active supplement originated from milk fermented by lactic acid bacteria, and conducted a pilot study with 9 dogs suffered from skin complications such as dry skin, mild eczema, and pruritus.

All experiments with animals complied with the standards specified in the guidelines of the University Animal Care and Use Committee of the Tokyo University of Agriculture and Technology, as well as with the guidelines for the use of laboratory animals provided by the Science Council of Japan. In addition, the study was approved by the committee of clinical research ethics of the Tokyo University of Agriculture and Technology (approval number, 0014005; approval date, 5/Feb/2015). Nine dogs with clinical symptoms of mild dermatitis and pruritus were included in the study. Pruritus was defined as itch in dogs in which there was no primary skin disease and other identified etiology, which was judged by veterinary clinical experts in the division of veterinary science of the Tokyo University of Agriculture and Technology. The dogs were clinically examined by veterinarians at the Animal Medical Center of the university. No dog had received treatment before enrollment in this study except conventional shampoo care in dog No. 3 and 4 (once two-weeks before the enrollment). Each owner provided written informed consent for the dog’s participation. They were allowed to resign at any time if necessary according to the owners’ requests or veterinarians’ instructions. The inclusion criteria for the study were a history of skin disorders including dry skin, mild eczema, and pruritus for more than 1 month, signs consistent with an allergic etiology judged by the clinical experts (Table 1). For judging the enrollment of dogs to the study, some dogs, which were suspected of infectious dermatitis including bacterial and fungal infections and parasite infestations, were examined the presence of pathogens. In case the test results were positive, they were excluded from the study.

Table 1: List of dogs participated in this study. Dog No. 10 was dropped out after the first 4-week period due to the owner’s will. Regarding itch evaluation, the severity of itch at the beginning of the enrollment was described. -, no or very mild; +, mild; ++, moderate.

The study was performed as a double-blinded, randomized, controlled, crossover study. Dogs were separated into 2 groups; one group received supplements containing fermented milk and MPL for 4 weeks; the other group received a placebo (Figure 1A). After a washout period of 2 weeks, the treatment protocol was switched between the groups. Owners were explained to add either placebo or active supplements, both of which formed white powder, to their daily food once a day without any arrangement. Because dog No. 10 was dropped out after the first 4-week period due to the owner’s will, the dog was excluded from all the data and statistical analyses in this study. 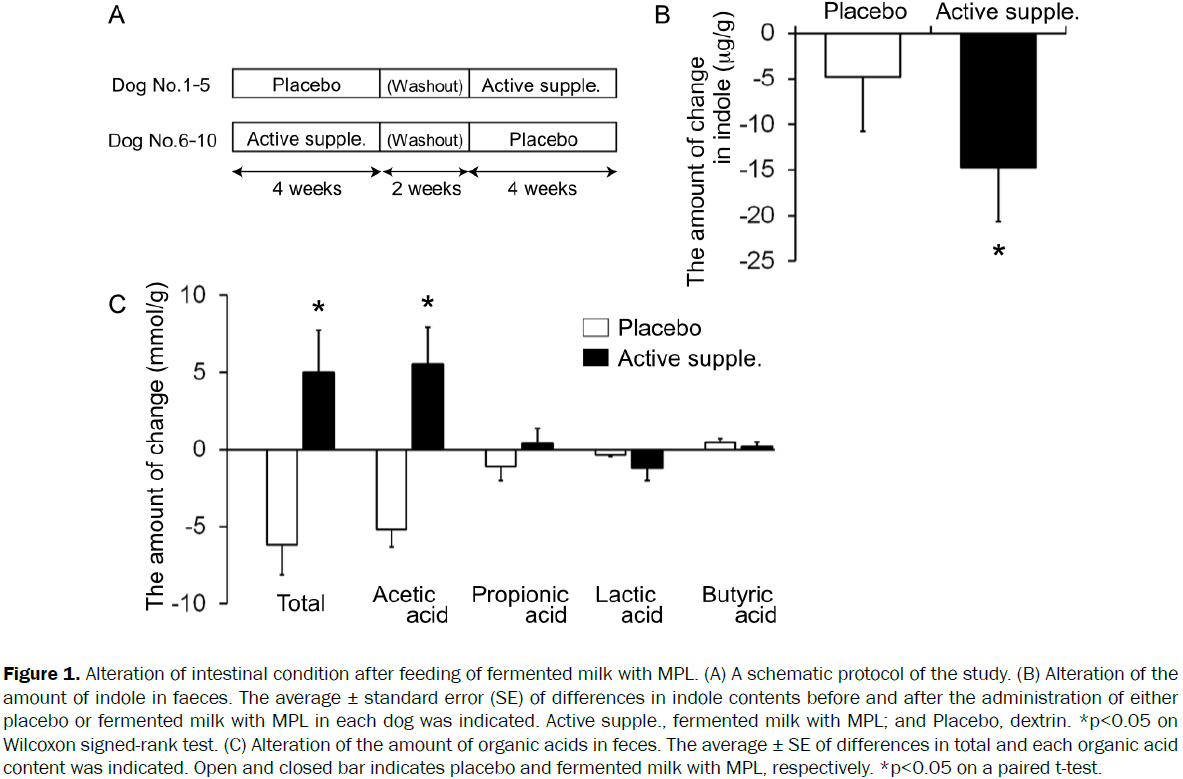 In this study, we used MPL as described previously [9]. During the clinical trial, each dog was orally administered 200 mg/kg MPL (containing 37 mg/kg sphingomyelin) (Phospholipid concentrate 700, Fonterra Co. Ltd. Auckland, New Zealand) and 370 mg/ kg freeze-dried yogurt containing Lactobacillus delbrueckii subsp. bulgaricus 2038 and Streptococcus thermophilus 1131 (Meiji Co., Ltd., Tokyo, Japan) as an active supplement, or 570 mg/kg dextrin (Matsutani Chemical Industries Co., Ltd., Hyogo, Japan) as a placebo, every day. The two test supplements were indistinguishable in color and texture. The dogs were clinically evaluated by veterinarians in the Tokyo University of Agriculture and Technology Animal Medical Center at least every two weeks before and during each period to avoid unexpected adverse effects. Clinical symptoms were also carefully monitored by veterinarians to prevent the exacerbation of skin conditions during the study. No dog received medications or treatment until the end of the study.

Analysis of short-chain fatty acids and indole in faeces

Four weeks after the administration of active supplements or the placebo in each term, feces were collected from each dog and the amounts of indole and short-chain fatty acids were measured by ion-exclusion chromatography using an HPLC system equipped with an electroconductivity detector (CDD-6A, Shimadzu Co., Kyoto, Japan) [10]. Feces were homogenized with ice-cold water. After centrifugation, the supernatant was collected and neutralized by adding 50 mM NaOH. Fecal indole was extracted from each sample with ice-cold methanol. After centrifugation, the supernatant was collected, dried, and resolved in methanol. Indole was identified using an HPLC-APCI-MS/MS system (4500QTRAP, Sciex, Framingham, MA, USA). All analyses were performed using a C18 column (186005297, Waters Corporation, Milford, MA, USA). The mobile phase consisted of methanol and water; the analysis used a flow rate of 0.3 mL/min with a methanol gradient of 30 to 100%. Multiple-reaction-monitoring was performed using characteristic fragmentation ions (m/z 118.1/91.1) in positive mode.

The scratching behavior of each dog was evaluated by the owner using the PVAS score, a 100-mm scale ranging from 0 (not itchy) to 10 (extremely itchy). This is a validated tool for assessing severity of the skin disease by the international task force on canine atopic dermatitis [11]. Each owner subjectively recorded the score on one day before or the first day of the administration, and 2 and 4 weeks after the initial administration in each term. Dogs diagnosed with mild dry skin were enrolled, and some dogs did not show any itch-related symptoms (PVAS score less than 1); they were excluded from the data in Figure 2. 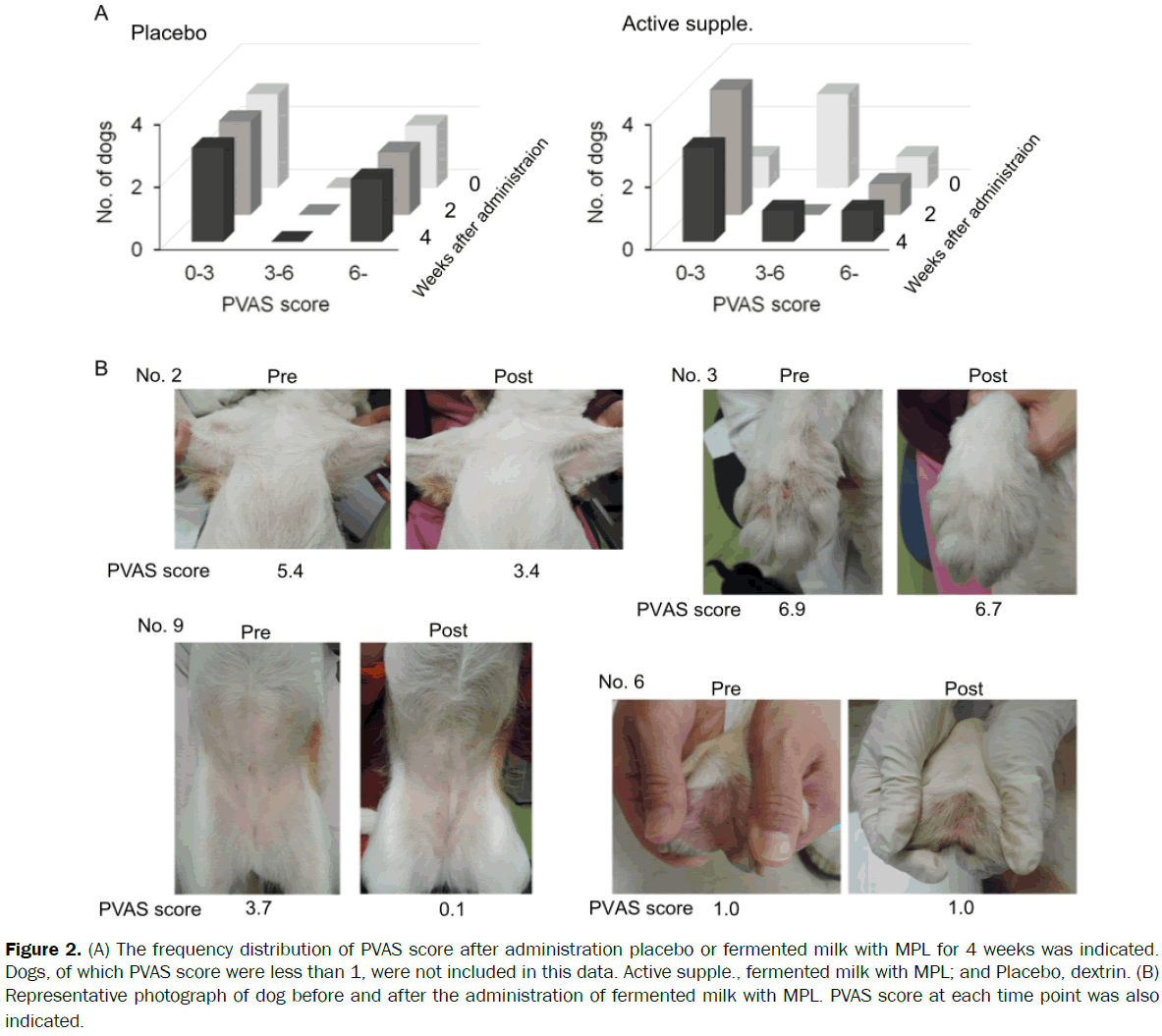 In this study, we generated a new supplement originated from milk fermented by lactic acid bacteria and added MPL to emphasize beneficial microbiota in the gut. We also showed that the administration of fermented milk with MPL improved the intestinal environment and skin conditions of dogs with skin disorders. As previously reported, fermented products containing probiotics, prebiotics, and biogenics bring beneficial effects not only on intestinal environment but also on skin conditions, demonstrating improvement in skin severity of patients with allergic skin diseases [12]. Although association of intestinal environment on skin conditions has been suggested, the exact involvement has been still unclear. As some intestinal bacteria, such as Bifidobacterium infantis, possess enzyme activity that can degrade sphingolipids in the intestine [13], the products after bacterial degradation of sphingomyelin may promote the proliferation and maintenance of beneficial bacteria in the lower intestinal tract. As shown in Figure 1B and 1C, probiotics we used in this study can also accelerate the improvement of the intestinal environment. Effects of fermented materials may be reinforced in the presence of sphingomyelin; thus, not only intestinal environment but also skin conditions were improved in dogs supplied with the active supplement in this study. Regarding the effects of the treatment on skin, the PVAS score was improved in several dogs, while the placebo treatment had no effect. Recent reports suggested that sphingolipids were responsible for ceramide synthesis directly or indirectly in the skin. Since one of major active components in MPL is sphingomyelin, improvements of skin conditions we observed in this study may be associated with the activation of ceramide synthesis by sphingomyelin or its derivatives [6,7,14].

We are grateful to Dr. Hyosun Jang and Ms. Juri Toyama (Tokyo University of Agriculture and Technology) for their supports.