A Phytochemical and Ethnopharmacological Review of the Genus Piper: as a Potent Bio-Insecticide

The genus Piper is of great significance to a commercial and economic level into the flavoring, pharmaceutical and insecticide industry, and great traditional use. Some species of this genus have been well explored. The aim of this review is to provide comprehensive information in the fields of Botany, traditional uses, phytochemistry and pharmacology of the genus Piper in order to explore its therapeutic potential and future research opportunities as a possible bio-insecticide in Mexico. All the available information material about the genus Piper was collected via electronic research: Pubmed, SciFinder, Scirus and Google Scholar; also a library research for articles published in peerreviewed Journals, thesis and books. Several species of the genus Piper were found in Mexico and they are used ethnomedically, such as Piper auritum, Piper aduncum L. H.B. & K.; Piper nudum C. DC., Piper hispidum Swartz, Piper sanctum Schiltdl. ex Miq., Piper umbellatum L., Piper psilorhachis C. DC., Piper diandrum C. DC., and Piper amalago L. Phytochemical research on Piper genus has found alkaloids, pterocarpans, sterols, flavonoids, triterpenoid, saponines, phenylethylamines and amines. The genus Piper have showed a wide spectrum of pharmacological activities in vitro and in vivo, and insecticide activities. However, there is a need to research for individual secondary metabolites responsible of these actions, and to study the way they act, as well as physiological pathways in detail. Piper has emerged as a good source of traditional medicine and it exhibits a wide spectrum of pharmacological activities and among other biological properties, who could be a possible bio-insecticide in Mexico.

Piperaceae family contains a wide variety of species; they group together into fourteen genuses and between 1950 and 2000 species approximately [1,2]. The genus Piper includes a numberless of bushes, herbals and ivies that can be found in hushed and humid places all around the globe; for instance, jungles and rain forests [3] of tropical regions of both hemispheres [4], the most known the genus Piperaceae family species that distribute in tropical and subtropical regions of the world are Piper and Peperomia, which include 600 and 700 species approximately. Although the largest number of Piper species are found in America (around 700 species) and Southern Asia (about 300 species), a smaller number of species are found in the South Pacific (about 140 species) and Africa (around 15 species) [5-8] . Among them, many species of the genus Piper are considered economical and ecologically important.

For example, the specie Piper auritum has been used for different gastronomy and medicinal purposes. Medicinal applications embrace; in case of fever; as a perspiratoy, diuretic and stimulant; erysipelas, gout, sore throat, and local anesthetic. It is also used as treatment for gonorrhea, bellyaches, headaches, wound poultice and repulsive and digestion stimulant as well [9]. Antiinflammatory, anti-bacterial and anti-fungal activities have also been reported [10-12]. This species is easily recognized by its large (20-50 cm) leaves, which are unequally lobed at the base and the very characteristic sarsaparilla or anise-like odor of its crushed leaves. Other studies in the literature have reported that Piper species have anti-leishmanial activity [13] and their essential oils have become an important aim in the search of new anti-parasite treatments.

The confirmed biological activity of some the genus Piper species is due to a wide variety of alkaloids, amides, propenyl phenols, lignanes, terpenes, flavonoids [14,15], among other compounds, which are biologically active against pathogen agents that affect human wellbeing (Tables 1 and 2). Nevertheless, it is still missing to carry out some investigations about diversity of this genus present in Mexico, taking into account the large number and the global size of these species in the world. The aim of this review is to provide comprehensive information on Botany, traditional uses, phytochemistry and pharmacology research of the genus Piper to explore its potential benefits and future research opportunities as a possible bio-insecticide in Mexico.

Table 1. Some secundary metabolites and biological activities of the genus Piper species.

Table 2. Biology activities of the genus Piper by organism groups.

Botanical description of the genus Piper

The genus Piper includes: 1000 species making it one of the largest genera of basal angiosperms [16,17]. They are characterized by their alternate leaves, opposed inflorescences, rarely axillary, single or compounds, floral bract deltoid, triangular, occasionally smooth, glossy, densely clustered flowers on the vertical axis, anthers opening in a vertical, horizontal, or oblique plane; pistil 3-5 carpels, smooth fruit, stylish, depressed or truncated [18]. Distribution patterns of the genus Piper species vary from being locally endemics until to spread out. There are several species restricted to a specific center of diversity (e.g. Andes, Central America) and others occur throughout neotropics or paleotropics [8,19] in neotropics can be found around 800 species, mainly in the Pacific Coast of Colombia and Ecuador, the Peru’s Amazonian West and North. The Brazil’s Atlantic Coast, the Venezuela’s Andes, the South of Mexico, such as Veracruz and the Yucatan peninsula [20].

Traditional uses of the genus Piper

Chemical investigations have revealed the presence of isoflavones, isoflavanones, C-glucosyl, flavonoids, and pterocarpanes, as well as alkaloids, amides, propenyl phenols, lignanes, neolignanes, terpenes, steroids, piperloids, chalcones, dihydrochalcones, flavones and flavanones in the genus Piper [3,34]. Secondary metabolites have been found in all parts of the plant, including leaves, stems, roots, and inflorescences [25]. Although all species investigated produce mixtures of secondary metabolites and some particular species contain very diverse suites of secondary metabolites (e.g., P. nigrum, P. betle, P. auritum), only a few studies have tested for the additive or synergistic interactions that may exist between these compounds [35-37] (Figure 1).

Figure 1: Geographic distribution of the genus Piper species. Numbers are estimations for each one of the diversity centers, thus, locally taxa may be represented more than once (Taken from Jaramillo and Manos, 2001).

Also, in some others species of the genus Piper various compounds have been purified and isolated by chromatographic techniques [9,15], which have characterized some of them using different spectroscopic methods, such as: infrared spectrum (IS) mass spectrometry (MS) and the distinct nuclear magnetic resonance (NMR) techniques. Piperine (Figure 2) was the first amide to be isolated from Piper species [25,34]. 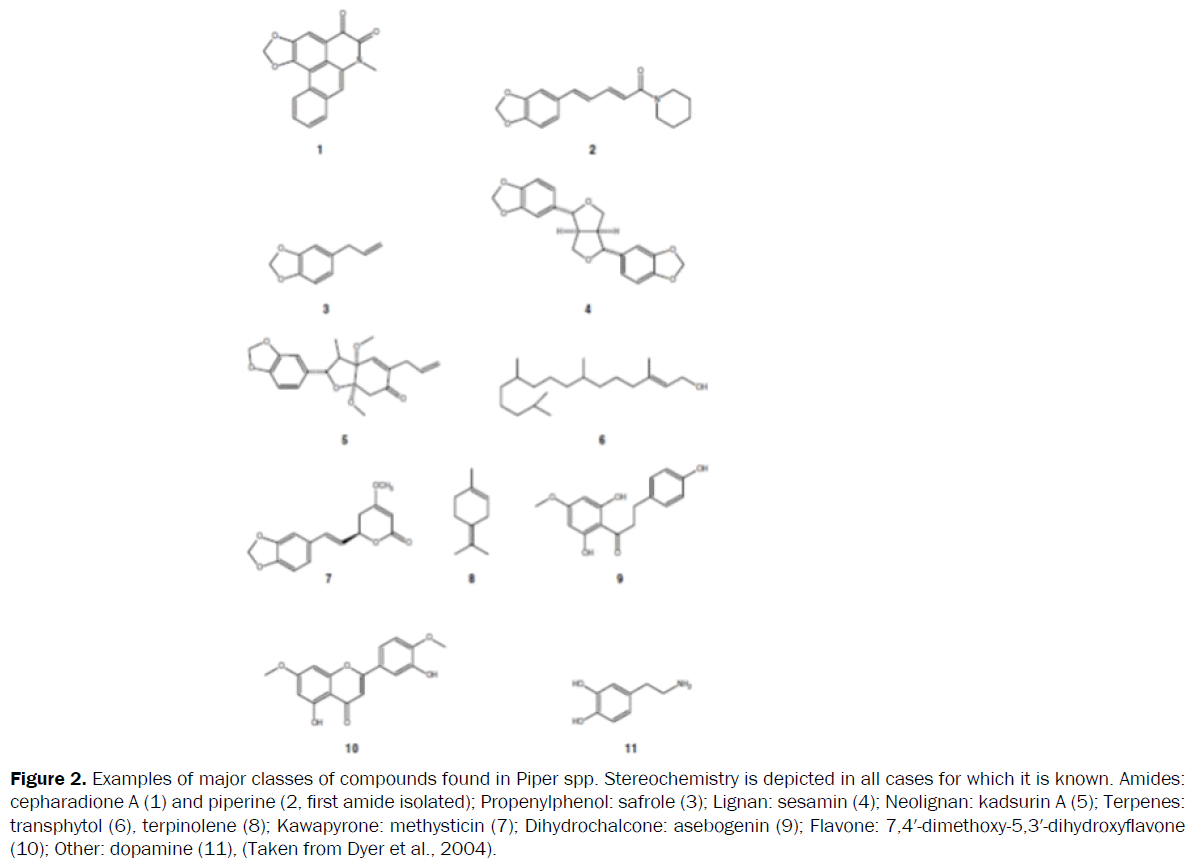 In terms of chemical constituents, the Piper hispidumis plant reported to contain amides, benzenes, benzoic acids, flavonoids, and volatile oils, which have shown significant anti-fungal, anti-microbial, anti-plasmodial, leishmanicidal and insecticidal activities. Three butenolides including a new compound like 9, 10-methylenedioxy-5, 6-Z-fadyenolide have been isolated from Piper hispidum leaves and its structures have been determined. Also, it has been found that Piper hispidum leaf extracts have enhanced the estrogen expression reporter responsive and endogenous genes in MCF-7 cells, demonstrating estrogen agonist effects. Piper hispidum extracts have also acted as agonists of the ER and 5-HT7 receptors [39].

Piplartine (5,6-dihydro-1-[1-oxo-3-(3,4,5-trimethoxyphenyl)-2-propenyl]-2(1H) pyridinone) is an amide alkaloid compound of Piper species. This secondary metabolite has significant cytotoxic activity against tumor cell lines, especially human leukemia cell lines, such as HL-60, K562, Jurkat, and Molt-4, as well as anti-fungal, anti-platelet aggregation, anxiolytic and anti-depressant properties. This is an isolated molecule from Piper tuberculatum [40,41].

There are reports about various Piper species where it has been observed compounds structurally alike to the prenylated benzoic acid, in the case of Piper aduncum [38] it was found an anti-microbial and molluscicidal activity [48,49]. In Piper arieianum, Piper tabogatum and Piper dilatatum which they also contain prenylated benzoic acids showed fungicidal activity [50-52], found a moderate activity anti-plasmodial and had a low cytotoxic activity, for extracts of species, such as: Piper aduncum L, Piper auritum Kunth, Piper jericoense Trel. and Yunck, Piper obrutum Trel. and Yunck, Piper marginatum Jacq (Tables 1 and 2).

The Piper species chemistry has been widely investigated and the phytochemical investigations from the entire world have led to the isolation of a number of compounds physiologically active like: alkaloids, amides, propenyl phenols, lignanes, neolignanes, terpenes, steroids, kawapyrones, piperloids, chalcons, dihydrochalcones and flavones. Biological activities of different species have had special emphasis, while it exhibits a wide spectrum of pharmacological activities. Also Piper has emerged as a good source of traditional medicine and promising results should be further substantiated by clinical treatments and future research opportunities as a possible bio-insecticide in Mexico. However, there is a need to research for individual secondary metabolites responsible of these actions, and to study the way they act, as well as bioavailability, pharmacokinetics and physiological pathways in detail for Mexico.