In this paper, we study electromechanical transducer, called “initial generalized electrical machine”. To describe the dynamics of electromagnetic processes, we use differential equations with periodic coefficients. In order to simplify those equations, we use Lyapunov transform to remove periodic coefficients. It is shown that the final equations of initial machine correspond to a two-phased machine with properties common for electrical machines with various applications.

The modelling of complex dynamic systems is one of the most important areas of research in the field of engineering. It is often desirable for analysis, simulation and system design point of view to represent such models by equivalent lower order state variable of transfer function models which reflect dominant characteristics of the system under consideration. A large number of methods are available in the literature for order reduction of linear continuous systems in time domain as well as in frequency domain [1-10].

We assume that clearly expressed poles are situated in the rotor. In rotor, poles are enrolled with distributed winding F called excitation winding and non-salient n-phase winding R [3].

In notchings of cylindrical stator we have m-phase symmetric non-salient winding S[6].

An example of such a machine with the three-phase non-salient windings at stator and salient winding at rotor is shown in Figure 1.

The number of turns of stator windings is defined by diagonal matrix Ws = Ws.1

Salient excitation rotor winding F has WF turns. It is characterized by resistance RF and inductance LF The direction of winding magnetic axis corresponds with the direction of magnetic symmetry d: DF[1,0]

The main inductances of stator and rotor windings in the matrix form are:

Where p - operator of differentiation

According to (1), in many cases it is convenient to represent in matrix form:

Equations (1) and (2) are called equations in real coordinate system and they include periodic coefficients. 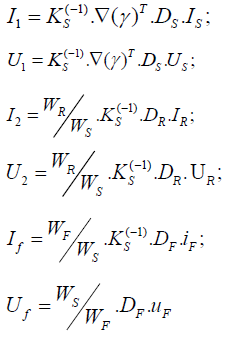 After replacement, we have:

Matrices of main and mutual inductances of equivalent machine windings are considered equal:

Thus, active resistances and dispersion inductances of phases of non-salient stator winding of equivalent machine are equal and correspond to those of initial generalised machine [10].

From the expressions, we have:

In the developed form, (3) can be written as follows :

Equations (3) do not include periodic coefficients. Therefore, transformed equations from (1) are Lyapunov transformations. If we assume that angle rotation speed ω varies slower than speed of electromagnetic processes, then we can consider that equations (3) are linear [11,12].

Electrical machine with salient rotor, that has in rotor salient and non-salient n-phase windings, and also m-phase nonsalient winding in stator, possesses properties of many electrical machines used in various applications.

- Stator and rotor windings have the same number of turns ;

- Non-salient n-phase rotor winding is changed into two concentrated windings with direction of magnetic axes along axes of magnetic symmetry d and q.

Lyapunov transformations obtained for electrical machine by Park permit to have equations whose coefficients are constant values.