The present study investigated the fish diversity and distribution in relation to environmental variables along the South Andaman coast from October 2012 to September 2014. Bimonthly sampling was carried out using cast net and six environmental variables via air temperature, water temperature, salinity, pH, Dissolved oxygen and Biological oxygen demand were measured. A total of 136 fish species belonging to 76 genera and 43 families were encountered during the study. Sardinella melanura, Sardinella fimbriata, Sardinella gibbosa, Liza macrolepis, Valamugil seheli, Stolephorus commerosnii, Gerres abbreviates, Carangoides malabaricus and Oreochromis mossambica were the most abundant species in the creek. Principal Component analysis, non-Metric Multi-dimensional scaling and cluster analysis revealed grouping of months into three seasons (Season –I, II and –III). Seasonal variation of environmental variables was observed, with high Air temperature, water temperature, salinity and Biological oxygen demand from February to April (S- III), whereas high Dissolved oxygen and pH from May to September (S- I). Fish species richness (16.57) and diversity (4.49) were recorded higher during 2012-13 and evenness (0.99) during 2013-14. In general high fish species diversity was recorded during wet season and low during dry season. RELATE (R=0.45) and BIOENV (R= 0.59) analysis revealed environmental variable significantly (P=0.1%) influencing fish assemblage of the creek. Water temperature and salinity were best influencing the fish assemblage of Carbyn’s Cove creek. The study depicted Carbyn’s Cove mangrove habitat was endowed with diverse fishery which were significantly influenced by environmental variables. Thus it is recommended the habitat to be utilized with proper planning for better conservation and sustainable fishery.

Mangrove ecosystems are one of the most productive and bio-diverse wetlands on Earth providing a critical habitat for the diverse marine and terrestrial flora and fauna [1]. The biological productivity of these regions is high due to heavy leaf production, litter fall and rapid decay to form detritus [2]. Thus they are utilized by numerous fisheries of commercial importance as feeding ground. Moreover the entangled masses of mangrove roots provide security for numerous fishes from predators and hence are utilized as hiding ground [3]. Consequently due to the utilization of these habitats as spawning, nursery, feeding, breeding and hiding ground by numerous ecologically important faunal communities [4-11]. As a result faunal diversity of these habitats is found to be high and is also recognized to enhance the biodiversity of adjacent habitat as well [7,12]. Further are known as the supplier of enormous ecological services for development of local community [13-16]. According to Teixeira et al., [17] studies on spatial temporal variation of biodiversity, especially of fish community are significant to determine environmental quality. Moreover aspects such as diversity, richness and evenness parameter are useful to analyse the communities from a specific environment [18]. In Indian context mangrove ecosystems are of great significance, since they are known for its crucial role in coastal biodiversity of the country [19,20]. India’s third largest mangrove cover (13%) is present in Andaman and Nicobar islands [21]. Island mangrove fauna were initially studied by Das [22] and first list of about 35 species of mangrove ecosystem of the islands was compiled by Das and Dev Roy [23] and it was later revised to 139 species [24]. The list was further updated to 290 species of fish by Devi and Rao [25]. However till date no comprehensive information is available on the diversity and distribution of fish species and influence of environmental variables on fish assemblage of mangrove habitat of these remote islands. Therefore the present study was undertaken to assess the diversity of fish species inhabiting Carbyn’s Cove mangrove and influence of environmental variables.

Carbyn’s Cove mangrove creek is located in the midst of the capital city (Port Blair) of South Andaman district of Andaman and Nicobar islands (92°44.400’ E Lat, 11° 38.313’ N Long) (Figure 1). The creek channel runs around 1km long and 50 m wide and is influenced by the domestic sewage from the city at one end and by the open sea at the other. Avicenna marina is the dominant mangrove species of the creek, besides Sonneratia alba, Rhizophora mucronata and Rhizophora apiculata are also observed. 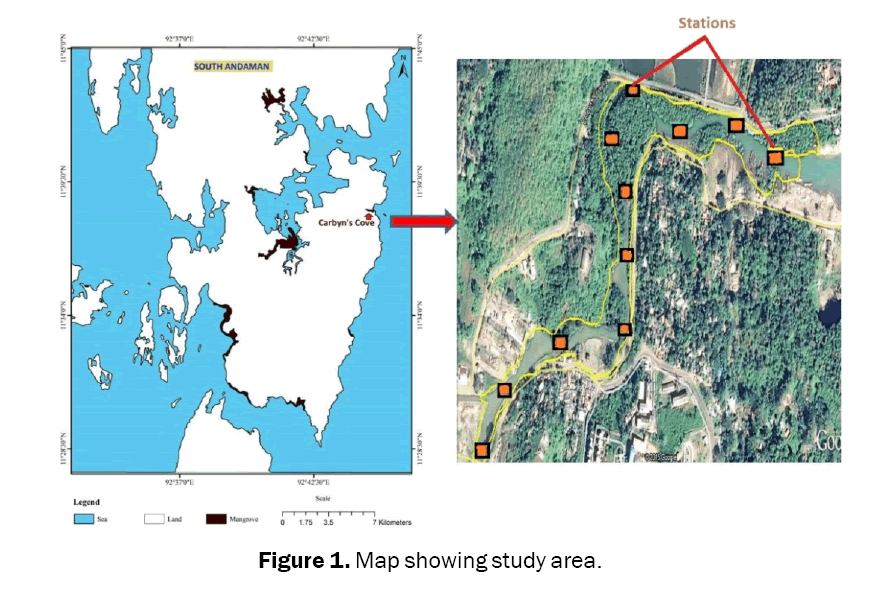 Bimonthly sampling was conducted from October 2012 to September 2014 mostly using cast nets (1.5 – 3.5 m depth; 10 – 20 mm mesh; stringless and stringed). Since cast nets are non-selective gears commonly operated in mangrove regions of the islands [25]. Netting was performed by artisanal fishermen twice during low tide (at receding or increasing tide) without craft in shallow and with craft in deeper areas of the creek. About five to eight hauls were made at each point, roughly at equal distance and the entire creek was covered in similar manner. Environmental parameters viz. water and air temperature (mercury thermometer, °C), salinity (refractometer, PSU), pH (ESICO model 1010), Dissolved oxygen (DO ml/l) [26, 27] and Biological oxygen demand (BOD ml/l) were measured monthly. Fish obtained during the study were identified following Fischer and Bianchi [28], Rao et al. [29] and Devi and Rao [25]. To assess the seasonal variation of fish assemblage the following three diversity indices were used (a) Margalef’s species richness (b) Shannon-Weiner diversity index (H') (c) Pielou’s evenness index (J') [30-32,27]. To understand the influence of environmental parameters on fish assemblages of creek, multivariate analysis BIOENV and RELATE were performed.

The abundance data of commercial fish were square root transformed, diversity indices, Multi-Dimensional Scaling (MDS) and cluster analysis were performed. Similarly environmental data were (log (x+1)) transformed and Principal Component Analysis (PCA) was carried out. RELATE and BIOENV analysis within the PRIMER was performed to scrutinize the relationship between the biological data and environmental data and similarity matrix was compared with spearman rank correlation coefficients (q), with q = 1 indicating a perfect match [33,34]. The entire year was divided into three seasons based on rainfall and temperature data obtained from meteorological department [35]. Season – I (May to September) with heavy rainfall and low temperature, Season - II (October to January) with moderate rainfall and moderate temperature and Season – III (February to April) with least rainfall and high temperature. All the statistical analysis was carried out using PRIMER software v6.

Air temperature ranged between 27°C and 33°C and water temperature from 25 to 32°C, pH altered from 7.7 to 6.6 during the present study (Figure 2). Dissolved oxygen (DO) varied from 3 to 4.1 ml/l, Biological oxygen demand (BOD) varied from 0.6 to 1.4 ml/l and salinity fluctuated from 10 to 33 PSU. The highest air, water temperature, salinity and BOD were recorded in Season -III and lowest in Season -I. The maximum values of DO and pH were recorded in Season -I while the least in Season -III. The highest values of environmental parameters were recorded during 2013-14 except for DO. The Principal component analysis plot based on environmental parameters showed a significant variation between the seasons (Figure 3). The PCA plot has shown season- I influenced by dissolved oxygen and season- III by salinity, air and water temperature. In general the present study recorded highest temperature in Season -III and lowest in Season -I. The minimum temperature in season -I could be attributed due to heavy rainfall by means of south-west monsoon. Similar observation of minimum temperature during monsoon was recorded by Kannappan and Karthikeyan [36] in Manakudy estuary Southwest coast of India (Tamil Nadu). The highest DO during season -I and lowest in season -III could be due to the decrease in oxygen solubility as a result of increase in temperature and salinity of the water during the summer season [36,37]. The wide variation in salinity in the creek between season -I and season -III can be attributed to the variation in rainfall between these seasons and is in agreement with the results obtained by Kumaran et al. [38] in Giriyampeta Estuary, Yanam. 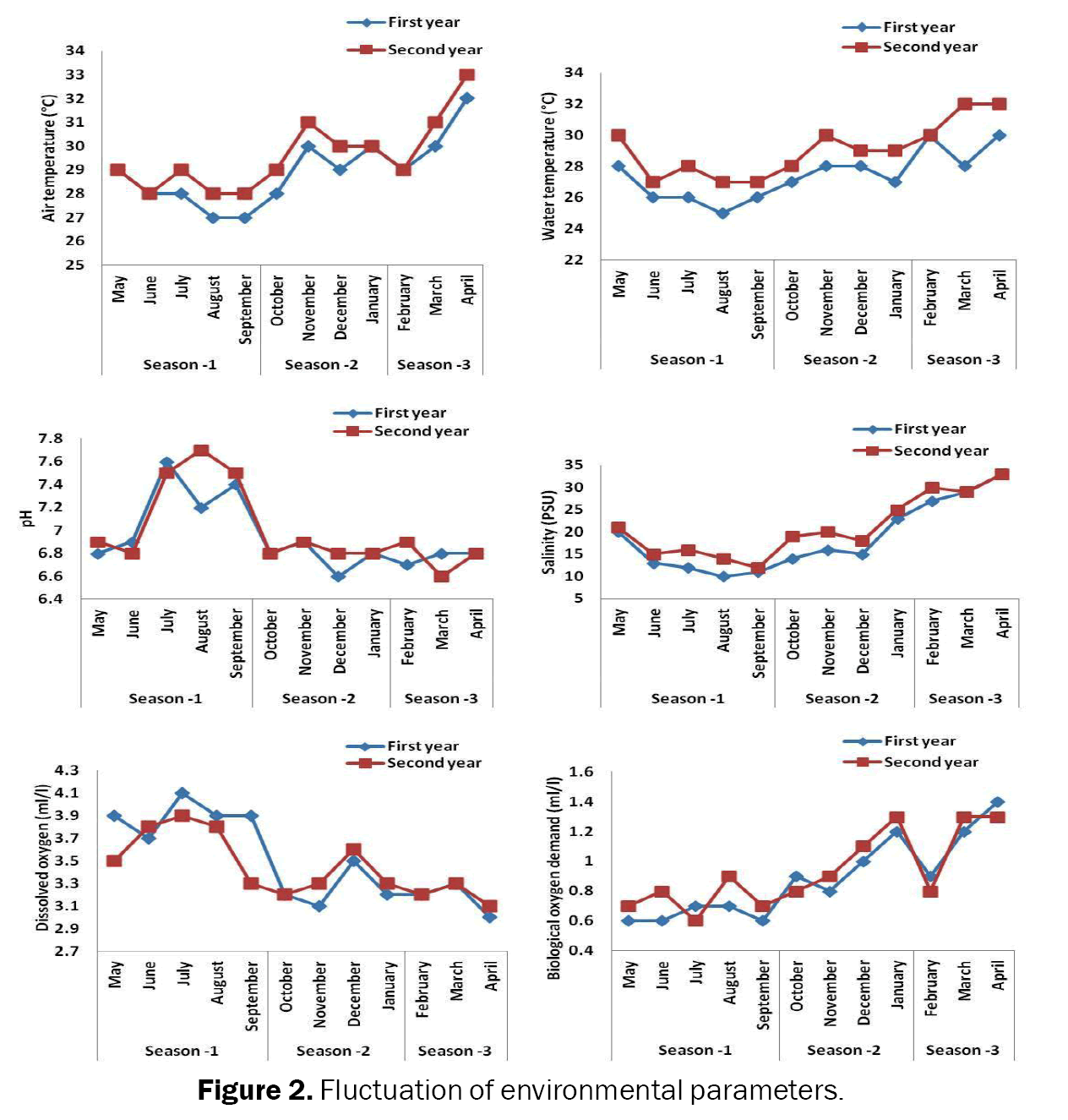 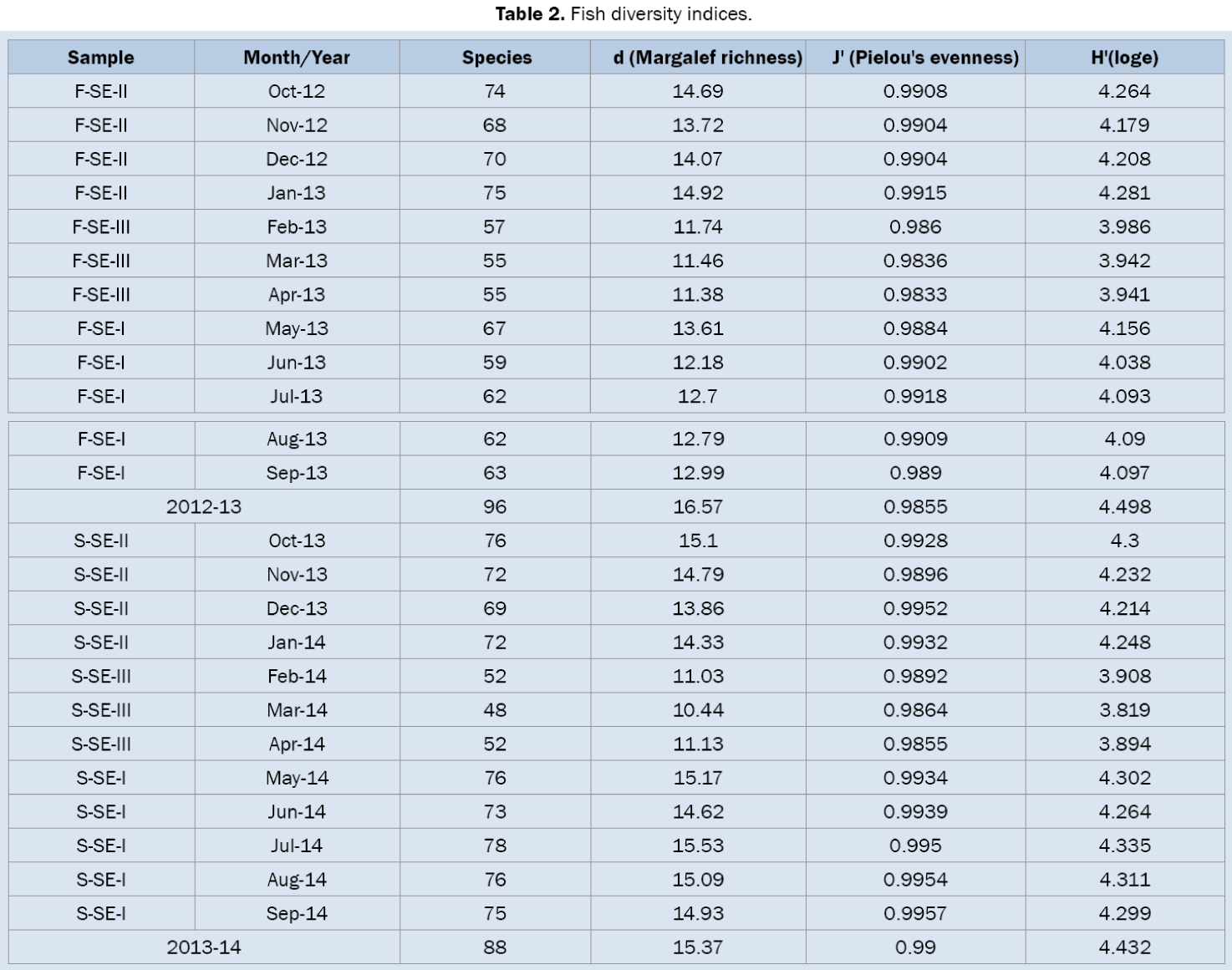 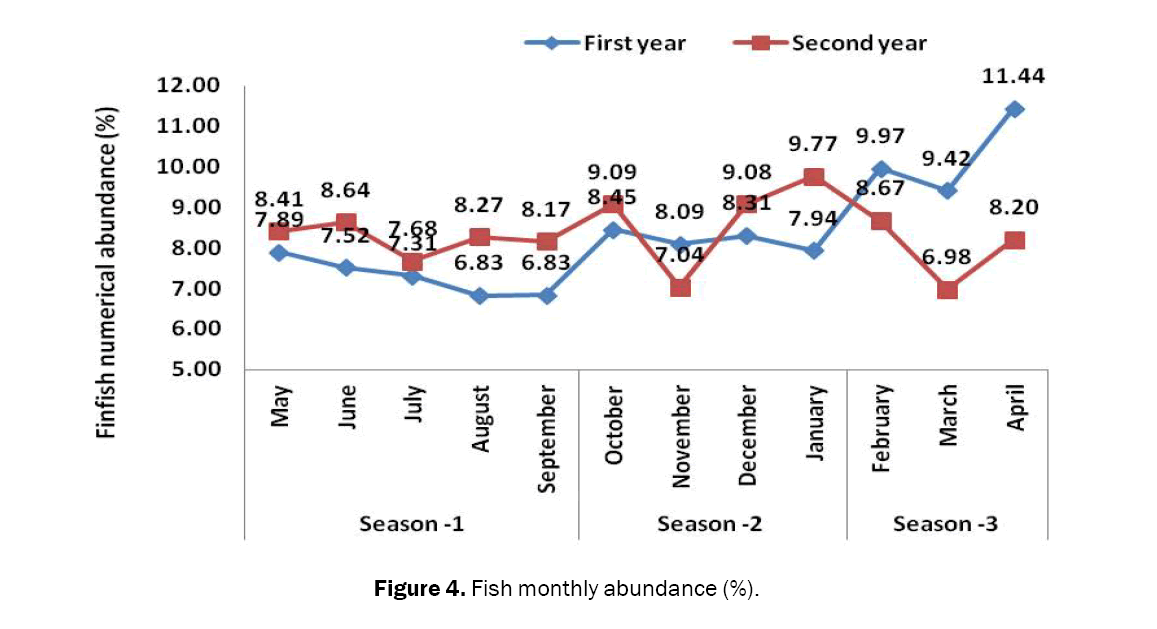 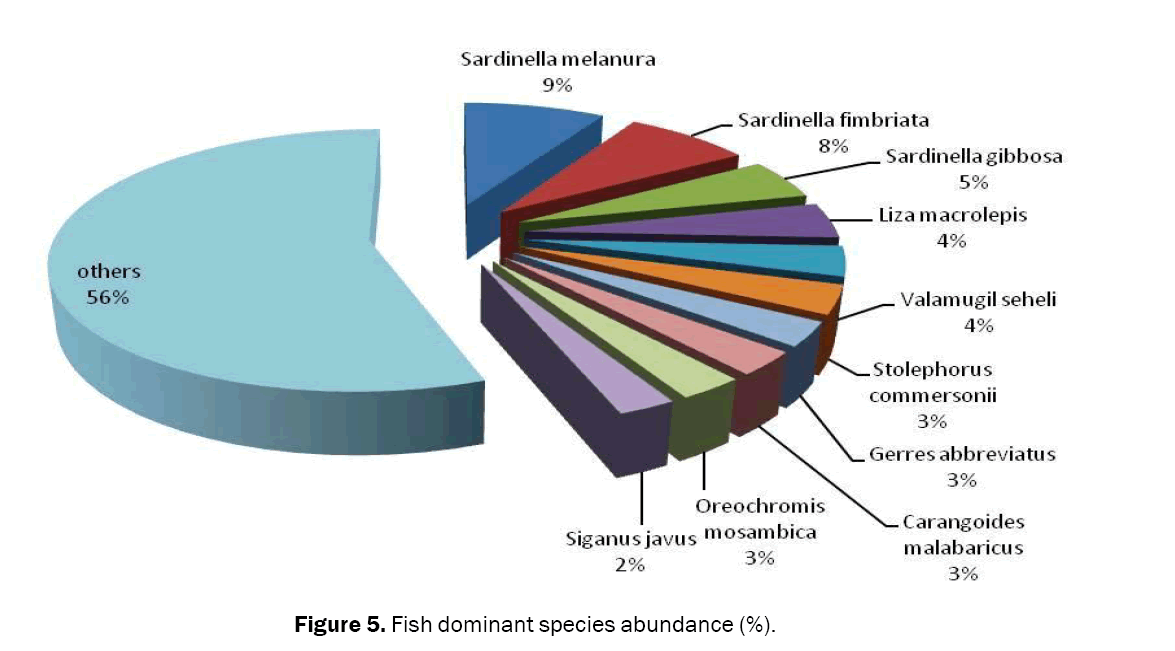 Figure 6: Cluster and MDS (Non-metric Multi-Dimensional Scaling) Dendrogram based on abundance data of the fish distribution of species during the study.

The multivariate RELATE analysis have shown a correlation value of r= 0.448 between the environmental variables and fish assemblage which was significant at 0.1% (Figure 7). Likewise BIOENV analysis has also shown a good correlation value of r= 0.595 which was significant 0.1% with water temperature and salinity as the best variables influencing the fish assemblage. It is an agreement with the earlier studies stating abiotic factors to influence fish assemblages in estuaries [40] including salinity [41,42], temperature [43] and dissolved oxygen [44,45]. Pombo et al. [46] and Nandan et al. [47] also found temperature and salinity significantly predicting the fish assemblages. According to Little et al. [48] salinity has been recognized as a key factor influencing the occurrence and composition of species in brackish water habitats in the tropics and subtropics. Nearly 80% of the fishery caught in the study was utilized by the coastal community for own consumption and was marketed seldom due to smaller size. Thus fishery obtained was dominated by small sized fishes indicating the importance of habitat as a breeding and nursery ground for the fishery resources. Maximum individuals of fishes were recorded in middle of the dry season (April) in the year 2012-13 and at the end of wet season (January) during 2013-14. The dominance of fish during dry season was due to the domination of Clupeidae family in the catch, these fishes migrate into the creek for feeding, breeding in large numbers during dry season. The domination of Clupeidae family during dry season is in agreement with Kumaran et al. [38], who explained that the mangrove ecosystems are utilized as breeding and feeding grounds for the migratory fishes. 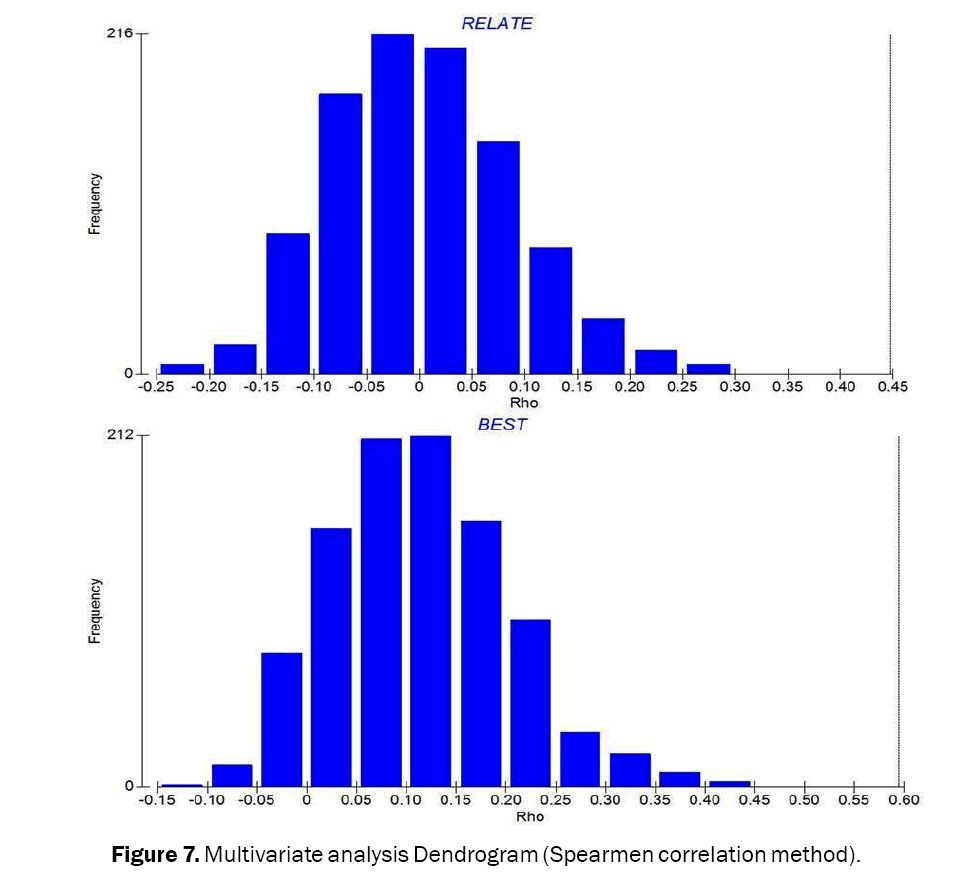 The present study investigated the fish diversity of Carbyn’s cove creek in relation to environmental variables. It was concluded that the creek was endowed with diverse and rich fish community and was found influenced by environmental variables at a significant level. Water temperature and salinity were the major parameters influencing the fish assemblage of the creek. Further the dominance of small sized fished fishes in the creek highlighted the study area as nursery and spawning ground for commercial fishery. Moreover it provides food source to the coastal community residing near the creek. Hence it is very much essential to monitor proper condition of the creek for better sustainable fishery in the future as well.

The authors are thankful to the facilities provided by Pondicherry University (A Central University) for conducting this study and the fishers of the study area for their cooperation.