Length-weight relationship was studied in the Marine edible gastropod Ficus ficoides was collected from Vanjiure fish landing centre, southeast coast of Tanilnadu, India, from January 2014 to December 2014.The linear equation was fitted separately for male and female. To find out the differences any between then, the data were subjected to analysis of covariance. The linear regression analysis shows significance for both male and females (p<0.001) in different size groups. The b values obtained in the present study indicated in different size group’s shows significant positive correlations and the nature of relationships remain constant from juvenile to mature stage. The p-value of correlation co-efficient(r) in both male and female were found to be 0.40 and 0.0015 respectively and its t-test shows significance at p<0.001 level. The length-weight relationship of Ficus ficoides articulated an allometric growth. The present study provides a baseline data of Ficus ficoides on length-weight relationship in different size group.

A mathematical representation of the length-weight relationship derived from the analysis of a number of specimens of different sizes from a particular area is a useful tool for study of population dynamic. The length-Weight relationship measurement is an important prerequisite for biological investigations. Estimates on this relationship are useful to know the variations in the expected weight from the known length groups which are in turn the indications of fatness, breeding and feeding states [1].

The length and weight are two basic components in the biology of the species at the individual and population level, information on the length weight relationship (LWR) is essential for proper assessment and management of these fisheries. The length-weight relationship is a useful tool to convert length to weight and vice versa [2].

In molluscs, the growth rate of various parts is not uniform. The growth of one part in relation to the whole organism is termed allometric growth. The concept of allometry is useful since expected weight for various length groups can be calculated in organisms known to change their shape during growth [3].

The present study animal Ficus ficoides (Figure 1) is a large and fleshy gastropod that attains a shell length of up to 65 mm in female and 62 mm male species. This communities living in the coastal regions of Southeast Coast of Tamil Nadu, India, exploit it as an important subsistence food source. The Figsnail (Gastropods: Mesogastropods: Ficidae) are commonly called Palchangu found in the warm seas of the world. In Taiwan, they are a common edible shellfish with low economic value due to the toughness of the autotomy tissue [4]. There were some local sightings of the species Ficus ficoides from the shore line recorded by Elaiyaraja et al. [5]. Fig Shells occur on sandy and muddy bottoms up to 200 m of depth. The morphological characters of the Ficus ficoides is shell more slender, spire flatly depressed not so bulbous at shoulder; siphonal canal straight; surface sculptured prominently reticulate, with spiral ridges intersected by well-developed longitudinal ridges, entire surface becomes reticulate in appearance; aperture elongated, glossy and coloured white tinged with violet; siphonal canal slender, surface colour white or pale violet with 4-5 spiral white bands including distant brownish marks on them scattered with reddish brown blotches and spots. Sexes separate, Female often larger than male [6].

Therefore, this study was conducted to determine whether shell length and weight have a strong relationship that can be used to monitor biomass production in populations of Ficus ficoides in southeast coast of Tamilnadu, India.

Specimens of Ficus ficoides of different size groups were collected during January 2014 to December 2014 at nine fathom level in the area of Vanjiure (Latitude: 10°51’52” N and Longitude: 079°50’56” E), Southeast coast of Tamil Nadu, India were brought to the laboratory.

Totally 1006 males and 971 females were collected for the present study. The length of the animal was measured in mm from curved larger end of the body whorl to the tip of the spiral apex (Total length TL) using a vernier caliper corrected to 0.1 mm. The soft parts of the snails were removed from the shells, blotted the excess moisture and weighed to the nearest of 0.1 mg using electronic balance. The maturity of the shell were studied by breaking open the shells, first by observing the colour of the gonad and secondly by the extension of the gonad into the visceral mass. This observations help to identify the stages of maturation. Fresh gonadal smears were observed every month to determine the size at which the sexual maturity was attained in males and females. For studying the variation in relationship between different shell dimensions, the data were grouped into nine length classes with a class interval of 5mm in male animals and in case of female it is ten length classes with a class interval of 5 mm (Tables 1 and 2). Tables 1: Regression Analysis for Total Length (TL) Vs Weight of the Animal (WA) of Ficus ficoides (Male) at Vanjiure Coast. 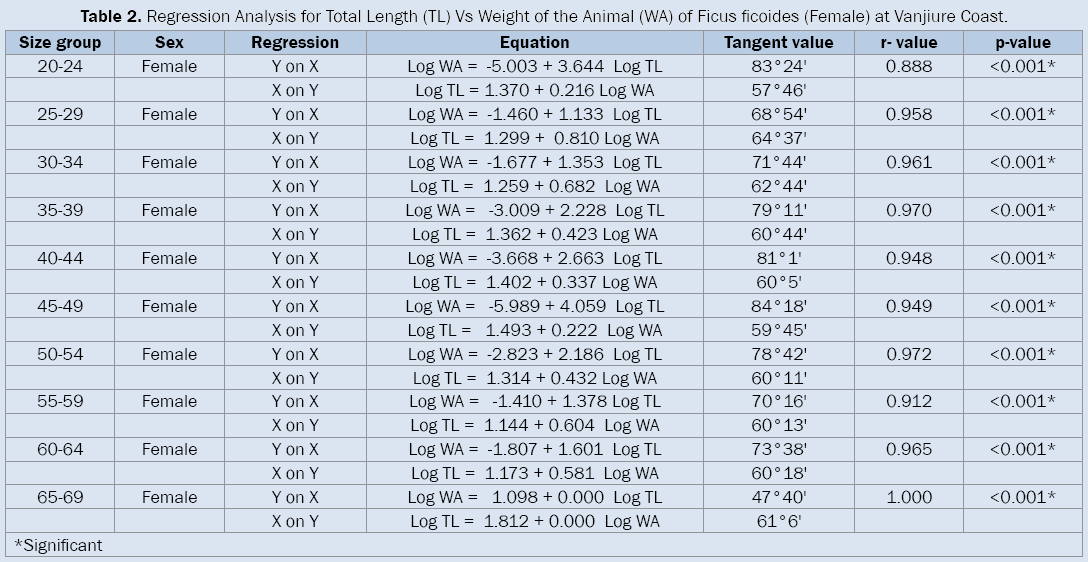 Tables 2: Regression Analysis for Total Length (TL) Vs Weight of the Animal (WA) of Ficus ficoides (Female) at Vanjiure Coast.

This can also be expressed in the logarithmic equation form as:

For this purpose the observed values of length and weight of the individual animal species were transformed into natural logarithmic values and regression analysis was carried out to calculate the ‘a’ and ‘b’ values. The correlation coefficient was determined to know the degree of association of the two variables. The variation between the regression coefficients (b) in male and female was calculated using Analysis of covariance.

Tables 4: Correlation Coefficient and Results of T-test in Male and Female of Ficus ficoides at Vanjiure Coast.

The b values were converted into tangent values (Tables 1 and 2). The body characters having the tangent values above 45° are said to be positive correlation, while values below 45°are referred to as negative correlation and values equal to 45° are called isometry. The b values obtained in the present study indicated in different size group’s shows significant positive correlations and the nature of relationships remain constant from juvenile to matured adult stage. The present study shows that the differences in the growth rate between male and female figs nails shows variation this may be due to increase in weight of an animal is proportionate to its length and they maintain specific body shape throughout their life. Najmudeen, [8] reported in his observations in the variations of SL – TW in different size groups is partly influenced by the variations in soft tissue weight owing to the maturity conditions of the animal and frequency of spawning. Similar size related variations in Length-weight relationship have also been observed in many bivalve species [9-11]. Kasinathan et al. [12] observed a significant difference in growth between the male and female and also reported significant differences between length weight and opined that the differences appears to be due to sexual maturity and also due to increase in size of the sexes. To find out the difference any, between then the data were subjected to Analysis of co-variance, which revealed significance difference between male and female size groups were shown in the (Table 3).

The p-value of correlation coefficient (r) in both male and female were 0.40 and 0.0015 respectively showing significant result between length and weight. The somatic growth depends on changes that covariate with shell morphology. Changes in the habitual LWR was associated with the increase in size and sexual maturity as observed in some other molluscan species from port novo waters [13,14]. This significant result of Ficus ficoides was supported by Elaiyaraja and Ramadoss, 2013. The observed total length plotted against total weight for male and female are presented in (Figures 2 and 3). The linear regression was significant for both male and female. 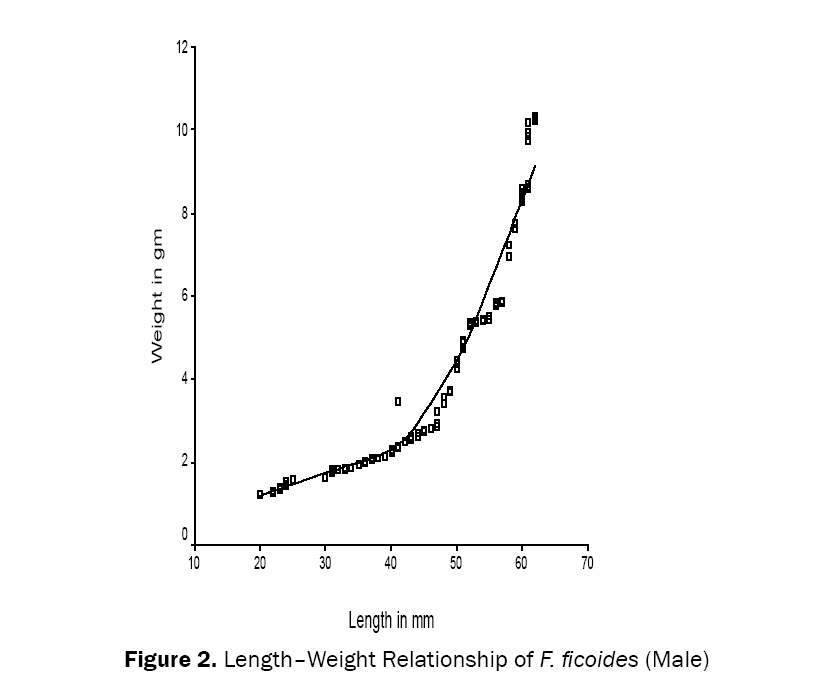 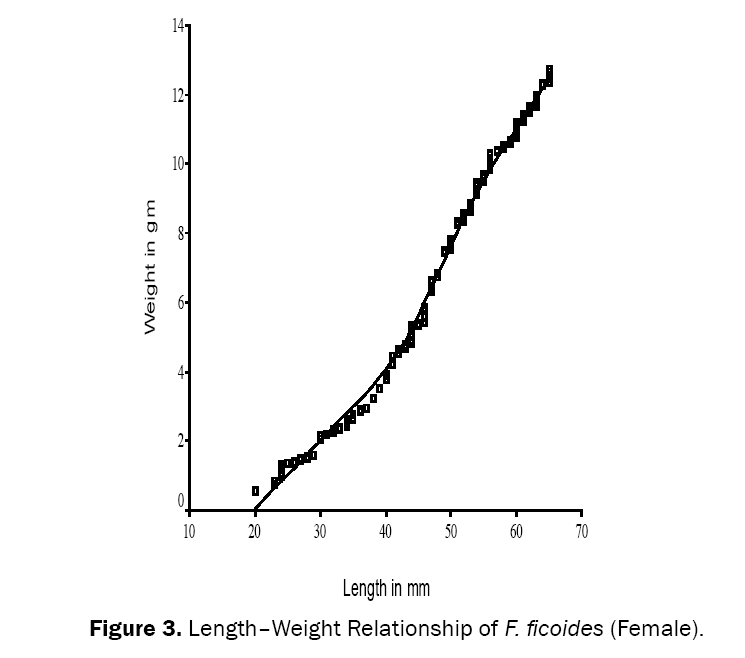 Analysis of covariance revealed significant difference within the size group in male and female. This similar result was observed by Ramesh and Ravichandran, [15] in Turbobrunneus.

In this present study showed a magnificent variation in length-weight relationships of both sexes. Jones [16] reported the length-weight relation varies seasonally so the length-weight data were taken throughout the annual cycle. Yassien [17] reported the rate of growth P. radiata was higher for small size than large animals. Benny [18] has reported for length weight relationship in Chicoreus ramosus was having allometric growth. Palpandi et al. [19] obtained the (r) values from male and female of Nerita crepidularia were 0.8601 and 0.8119 respectively. The present study r- values is lower when compared to 0.60 to 0.96 obtained by Kuber [20], Karnik and Chakraborty [21] obtained the regression ranged from0.8075 to 0.965 from squid in west coast of India and Thirunavukkarasu et al. [1] obtained the r-value of male and female 0.928 and 0.948 in mud crab. Ramasamy et al. [22] reported the r-value of male and female was 0.085 and 0.841 respectively. This present study revealed the length-weight relationship shows allometric growth. Hence the present study probably forms baseline information on the Ficus ficoides population in Southeast coast of Indian to facilitate their commercial exploitation.

Authors are thankful to the Principal, HOD, Associate and Assistant professors of the Department of Zoology, TBML College, Porayar for providing necessary facilities to implement this work.

Tables at a glance