NANOEMULSION: An Effective Drug Carrier for the Management of Psoriasis

Psoriasis is a chronic autoimmune inflammatory dermatological disorder [1-3]. Different genetic factors such as HLA-C genes and environmental factors (infection, stress, food or drugs) are considered as pathogenesis of psoriasis [4,5]. Psoriasis is a psychosocially, debilitating disorder that affect 1 to 3% of the population worldwide [6-9]. West African countries like Nigeria, Ghana, Mali, Senegal, Angola etc, have a lower prevalence of psoriasis (0.05 % to 1%) than the eastern countries like Kenya, Uganda, Tanzania (3%). Psoriatic arthropathy also seems higher in white populations (11% in USA) than in Asian (1% in Japan) or African persons, where the prevalence of HLA-B27 haplotype is low (3-6 % in certain African countries) [10]. Psoriasis has a severe influence on physical and emotional well-being. It basically involves hyperproliferation of keratinocytes. The pathogenesis of psoriasis is related with disease-including T helper 1 (Th1) and T helper 17 (Th17) cells [11-17]. Maximum patient of psoriasis vulgaris are treated topically [18]. However, several limitations are associated with the topical medication which acts as a barrier between topical medications and management of psoriasis [19,20]. One of the most important barriers is stratum corneum which reduces the bioavailability by restricting their absorption to a large extent, whereas in case of dermatological disorder topical application of active ingredient enhances therapeutic efficacy [21,22].

Presently, it has become important to ensure advancement and success in drug therapy along with the development of drug, because still the major causes for the failure of topical medications are [21]:

4. Drug distribution to other tissues combined with high drug toxicity

A promising strategy to avoid these drawbacks of drug is to develop a suitable drug carrier system and to achieve controlled and localized delivery of the active drug according to the specific demand of the therapy [23].

Transdermal drug delivery is a well-known route of administration, in which active ingredients is delivered via skin for systemic distribution [24,25]. It increases the bioavailability of drugs and reduces the adverse effects [26]. Drug delivery via skin to the systemic circulation is suitable for a number of clinical conditions [27]. Some important advantages of TDDS are mentioned below [28-32]:

As mentioned earlier stratum corneum acts as a barrier for topical therapy. For targeting the drug and to improve pharmacokinetics of drug, the primary skin barriers should be overcome [14]. Some disadvantages of transdermal application are possibility of local skin irritation (due to an active substance or excipient) or absorption diversity due to differences in skin structure and thickness on different body parts [21]. To avoid these problems and skin barrier effect, different modern techniques were developed [21].

Novel carriers such as liposome, niosome, microemulsion, nanoemulsion, nanostructured lipid carrier and ethosomes have indeed brought us closer to the goal of safe and efficacious treatment of the disease [23,36-38].

Nano/submicron emulsions are attracting researchers because of its increase skin permeation, prolonged action on the skin, and protection of the drug from instability. Nanoemulsions are most important and established novel carrier system which can be defined as isotropic, thermodynamically stable, transparent or translucent dispersions of oil and water stabilized by an interfacial film of surfactant molecules. Nanoemulsions are having the droplet size 20-500nm. Nanoemulsions have attracted the attention of researchers due to its easy method of preparation, high stability with increased bioavailability [23,39-43]. The advantages of nanoemusions are shown in Figure 2 [44-49]. • O/W Nanoemulsion: Where oil droplets are dispersed in the continuous aqueous phase

• W/O Nanoemulsions: Where water droplets are dispersed in the continuous oil phase

• Bi-continuous Nanoemulsions: Where microdomains of oil and water are interdispersed within the system [23].

The interfacial tensions between oil and water are stabilized by addition of surfactants and cosourfactants.

Nanoemulsion contain four main component which are as follow [23,41]:

Decision of a suitable oil phase is vital as it influences the determination of other component of nanoemulsion, mostly in case of O/W nanoemulsion. Generally, the oil which has maximum solubilising potential for drug moiety is chosen as oily phase for the formulation of nanoemulsion. Maximum oil solubilizing potential is directly proportional to drug loading [33].

Surfactant alone cannot lower the oil-water interfacial tension adequately to yield a nanoemulsion due to which the addition of an amphiphillic short chain molecule or cosurfactant is compulsory. Hydrophilic cosurfactants preferably alcohols of intermediate chain length such as hexanol, pentanol and octanol, which are known to reduce the oil/water interface and allow the spontaneous formation of nanoemulsion [23,33].

Factors to Be Considered During Preparation of Nanoemulsion

• Surfactants must be precisely chosen so that an ultra-low interfacial tension (< 10-3 mN/m) can be accomplished at the oil/ water interface which is a prime prerequisite to deliver nanoemulsion [23].

• Concentration of surfactant must be sufficiently high so that it can provide sufficient surfactant molecules which required stabilizing the micro droplet to be created by ultra-low interfacial tension [23].

• The interface must be fluid enough to promote the formation of nanoemulsion [23].

The drug is dissolved in the lipophilic part (oil) of the nanoemulsion. The aqueous phase is combined with surfactant and a cosurfactant. The aqueous phase is added at a slow rate with gradual stirring until the system is transparent. The amount of surfactant and cosurfactant that can be incorporated shall be determined with the help of pseudo ternary phase diagram. Finally ultra sonicator can be used to achieve the desired range of dispersed globules. Then it is allowed to equilibrate. Gel may be prepared by adding a gelling agent. Most widely used gelling agent is carbomer [47,50]. 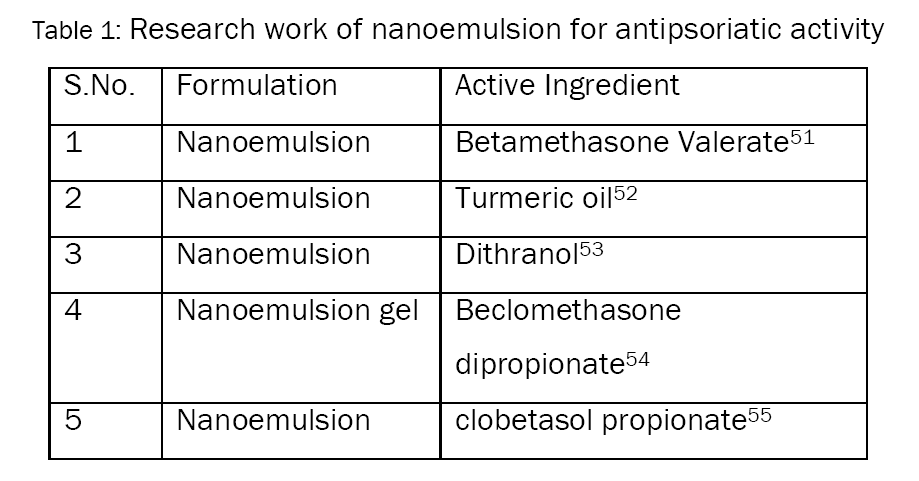