The Clinical Significance of Interleukin-6, C-Reactive Protein, and Procalcitonin in the Early Recognition of Nosocomial Infections in Preterm Infants

Methods: 120 neonates were finally analyzed, 89 with sepsis were compared with 31 noninfected controls. IL-6, CRP and PCT were measured at certain stages. Receiver-Operating Characteristic (ROC) curve analysis was used to determine the best cutoff values of IL-6, CRP, and PCT for diagnosing sepsis.

Conclusion: IL-6, CRP, and PCT are reliable indicators for early diagnosis of nosocomial infections in preterm infants. When PCT was combined with IL-6 or with both IL-6 and CRP, the accuracy of clinical diagnosis could be improved.

Neonatal sepsis is a systemic infectious disease caused by pathogens such as bacteria, fungi, and viruses that invade the circulation, grow and multiply, and produce toxins within 28 days after birth. According to the onset time (before or after 3 days of age), it can be divided into Early-Onset Sepsis (EOS) and late-onset sepsis [1]. The incidence is 1-8/1,000 live births. The lower the birth weight, the higher the incidence of neonatal sepsis. The incidence of neonatal sepsis in infants with very low birth weights may reach 164/1000, and the incidence of long-term hospitalization may reach 300/1000 [2]. The clinical signs of neonatal sepsis are atypical: It often manifests as respiratory distress, tachycardia or bradycardia, poor perfusion, feeding intolerance, jaundice, and abnormal body temperature. The nonspecific clinical signs increase the difficulty in diagnosing neonatal sepsis. Therefore, clinical diagnosis is an unreliable early indicator of sepsis [3].

The risk of developing sepsis is higher in neonates due to their immature immune systems, low leukocyte phagocytic activity, low cytokine production, poor humoral immunity, weak skin barrier, and the use of invasive procedures such as mechanical ventilation, central venous catheterization, and lumbar puncture [4,5]. In 2013, the World Health Organization announced the results of an assessment of the causes of death of 2.8 million neonates worldwide. There were an estimated 420,000 neonatal deaths caused by sepsis per year, accounting for 15.0% of neonatal deaths [6]. The onset of neonatal sepsis is relatively insidious. However, it progresses rapidly and is often accompanied by severe complications, such as shock and multiple organ dysfunctions. Therefore, early diagnosis is essential to reducing the mortality of neonatal sepsis and improving the prognosis. At present, the laboratory tests that are used for the diagnosis of sepsis include bacterial culture, white blood cell counts, platelet counts, cell surface antigen and bacterial gene detection. However, because of unclear diagnostic thresholds, complex detection methods, false-negative results, and other reasons, there is no ideal indicator for the early diagnosis of neonatal sepsis. The gold standard for the diagnosis of sepsis is blood culture, but the reporting of results may take 24-48 hours. Therefore, testing methods with good accuracy, high sensitivity and specificity, and quick results are urgently needed to guide the clinical diagnosis and treatment of neonatal sepsis. Many conventional hematological tests such as CRP, PCT and “Potential biomarkers” such as IL-6 have been used for the diagnosis of sepsis while the diagnostic threshold for IL-6 remains unclear [7]. This study assessed the best cutoff value of IL-6, the diagnostic accuracy of CRP, IL-6, PCT, singly and in combination, for the early diagnosis of nosocomial infections in preterm infants.

This study was approved by the Ethics Committee of Shengjing Hospital of China Medical University. Informed consent was obtained from the guardians of the study participants, and sample collection was performed in accordance with the standards of diagnosis and treatment.

A confirmed sepsis diagnosis was defined as clinical manifestations of sepsis and a positive blood or cerebrospinal fluid (or other sterile body cavity fluid) culture. A clinical sepsis diagnosis was defined as clinical manifestations of sepsis with any of the following: more than two positive nonspecific blood detection indicators (total leukocyte count, platelet count, CRP, PCT), cerebrospinal fluid showing signs of purulent meningitis; or the detection of pathogenic bacterial DNA in the blood. A nosocomial infection was defined as an infection occurring ≥ 48 hours after hospital admission, including infections occurring during hospitalization and those occurring after discharge, as a result of hospital exposure to pathogens [10].

SPSS 22.0 (IBM Corp, Armonk, NY, USA) was used for the statistical analysis of the data. Continuous data were expressed as means ± standard deviations, and t-tests were used for comparisons between groups. Discrete data were expressed as frequencies, and chi-square tests were used for comparisons between groups. The best cutoff values of IL-6, CRP, and PCT were determined using Receiver-Operating Characteristic (ROC) curve analysis. The sensitivity, specificity, Positive Predictive Values (PPVs), Negative Predictive Values (NPVs), and Areas Under the ROC Curves (AUCs) of the three inflammatory marker levels were calculated singly and in combination. The correlation analysis used single-factor regression analysis, with the levels of the indicators as independent variables. A P value of <0.05 indicated that the difference was statistically significant. This study was retrospectively registered in the China Clinical Trials.

A total of 262 cases were enrolled in the study. Among these infants, 136 were excluded. In all, 126 infants enrolled in the study; 5 infants in sepsis group and 1 infant in control group dropped out of the programme because of parent’s wish to withdraw from the trial. Finally, 89 cases of sepsis (47 cases of confirmed sepsis and 42 cases of clinical sepsis) and 31 controls (noninfected neonates hospitalized during the same period) could be analyzed. There were 12 cases of low birth weight, 8 cases of neonatal hyperbilirubinemia, 4 cases of neonatal anemia, 4 cases of gastrointestinal bleeding, and 3 cases of arrhythmia in control group (Figure 1). Figure 1: Flow chart of the study.

Participant characteristics according to group there were no statistically significant differences in gestational age, age, sex, Apgar score, or birth weight between the neonates in the three groups (Table 1).

Table 1. Participant characteristics according to group.

Table 4. Mean interleukin 5 levels at each stage of infection in the sepsis group. Figure 2: Mean interleukin 6 levels in the neonates with sepsis according to time since the infection onset IL-6, interleukin 6. 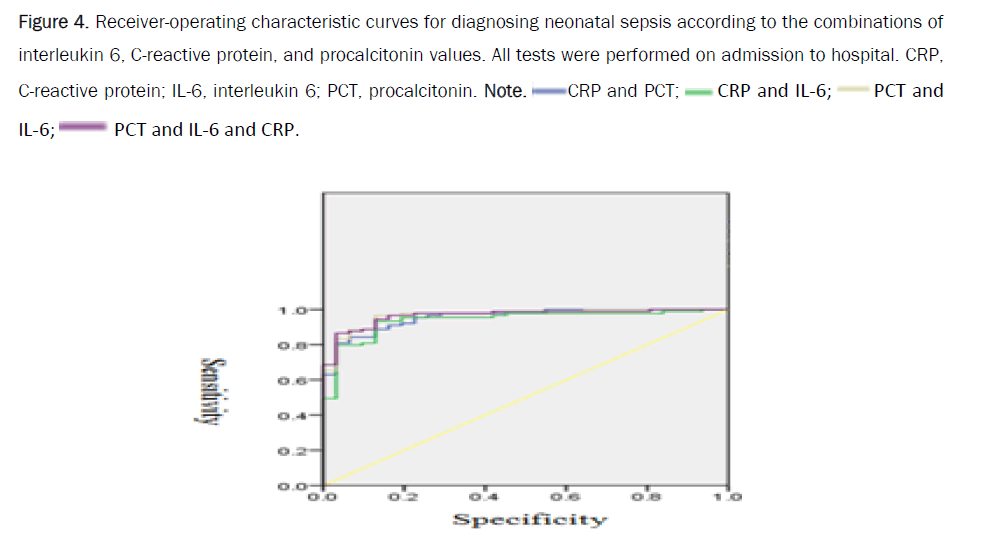 PCT had a high sensitivity, specificity, PPV, NPV, and AUC value, making it an ideal single index for the early identification of nosocomial infection in preterm infants. When combining PCT and IL-6 or using a combination of CRP, IL-6, and PCT for testing, the sensitivity and specificity values were over 85%, and the predictive values were high (Table 5).

Table 5. The diagnostic accuracy of interleukin 6, C-reactive protein, and procalcitonin, singly and in combination, for making the diagnosis of sepsis.

Cytokines are proteins or small molecular polypeptides secreted by cells. Among them, the proinflammatory cytokine IL-6 is currently a focus of research [12]. IL-6 is a multi-effect proinflammatory factor. Under normal circumstances, the body's IL-6 content is extremely low (<10 pg/mL). After pathogens invade the body,

In bacterial infections, the PCT level increases under the stimulation of endotoxin and proinflammatory factors (IL-6, TNF-α, and IL-1β). However, in viral infections, interferon gamma inhibits the synthesis and release of PCT [25]. PCT is not affected by factors such as stress and is only related to the extent of bacterial infection. The level of PCT in healthy people is extremely low (<0.1 ng/mL). When the body is infected, a level ≥ 0.5 ng/mL is defined as abnormal. A study by showed that PCT started to increase 4 hours after the onset of infection and remained at the peak level for 8–24 hours [26]. After control of the infection, the PCT level decreased by 50% per day. However, found that PCT peaked 12 hours after the onset of infection and returned to normal within 3 days after infection control. This study found that in the sepsis group, the serum PCT level before the initiation of antibiotic treatment was significantly higher than that after treatment and was higher than the level in the control group, suggesting that the PCT level was positively correlated with the severity of infection [27]. Conducted a prospective, controlled study and found that the serum PCT levels of neonates with sepsis were significantly higher than those of healthy neonates, with the best cutoff value of 2.4 ng/mL. In this study, the best cutoff value of PCT was 2.33 ng/mL, with a sensitivity of 84.0%, specificity of 97.8%. Therefore, serum PCT is of higher value for the early diagnosis of nosocomial infection in preterm infants, and the administration of antibiotics can be determined in the early stage of infection. However, there is a physiological increase of PCT after birth. It peaks after 24 hours, and drops to below 0.1 ng/mL within 72 hours. This physiological pattern limits the diagnostic accuracy of serum PCT for the diagnosis of EOS [28]. Moreover, a retrospective analysis by showed that the average cord blood PCT level of neonates with EOS was 3.03 ng/mL, which was significantly higher than the 0.16 ng/mL of noninfected neonates [29]. With the cutoff value of cord blood PCT as 0.6 ng/mL, the NPV of PCT was 99%, which made it an useful indicator for diagnosing EOS.

This study found that when the PCT was combined with the IL-6 or with both IL-6 and CRP, the sensitivity, specificity, PPVs, NPVs, and AUC values were high. These two combinations could both improve the accuracy of PCT for the early diagnosis of nosocomial infection in preterm infants.

The results of this study showed that gram-negative bacteria were isolated significantly more frequently than gram-positive bacteria in the blood cultures of the neonates with sepsis, and that Klebsiella pneumoniae was the dominant bacteria, which is consistent with the results [30].

The authors have no conflicts of interest to declare that are relevant to the content of this article.

The data sets generated and analyzed during the current study are available in the Harvard Dataverse repository.

Ethics Approval and Consent to Participate

The study was approved by the Medical Ethics Committee of Shengjing Hospital of China Medical University.