A Brief Review on: Production and Characterization of Antibiotic from Streptomycetaceae Family

This the study based on production of secondary metabolites name as antibiotics and we studied those antibiotics in common viral and bacterial species to know their effect and type. This experiment we followed normal upstream and downstream processing to extract antibiotic from know species. In our study these antibiotics were observed to be highly effective against pathogenic forms like vibrio, salmonella and Enterobacter. In future we have to characterize this compounds using NMR, LCMS .This study indicates the above organisms are producing bio active compounds.

Actinomycetes often show themselves to have outstanding antimicrobial activity. Actinomycetes were not forgotten; however system screening program ended the production of streptomycis [1-4]. Antibiotics were also found which are primarily antibacterial and antifungal, example streptomycin, nystatin, cycloheximide. New antibiotic are still being discovered, most of being are them isolated from cultures actinomycetes [5-7]. The uses of antibiotic have been extended far beyond the origin chemotherapeutic provinces and even into the field of animal feeding and food preservation. Streptomycin occupies a special place in antibiotics. Among all groups of microorganism, streptomycin has been proved to the richest source of antibiotics [8-10]. In view of the fact that the antibiotic producing microorganism are biological system one may expect, consider and vitiate not only a quantitative but also a qualitative among all the species and strain producing same type of antibiotics. The ability of species other than streptomyces to produce streptomycin was first demonstrated by Orksman. It has since been established that the streptomycin and streptomyces group of antibiotics are produced by variety of microorganisms.

The production of antibiotics has been wide spared since the pioneering efforts of Florey and Chain in 1938. The importance of antibiotic to medicine has led to much research into their discovery and productions. Despite the wide variety of known antibiotics, less than 1% antimicrobial agent has medical or commercial value. For example, whereas penicillin has a high therapeutic index as it does not generally affect human cell, this is not so for many antibiotic [11-16]. Other antibiotics simply lack their advantage over that already in use, or have no other practical applications.

Most of the antibiotics can often discovered using a screening process. To conduct such a screen process, isolates of many different microorganisms are cultured and then tested for production for diffusible product which inhibits the growth of test microorganisms. Most antibiotics identified in such a screen are already in race and must therefore be disregarded. The remainder must be tested for their selective toxicities and therapeutic activities, and the best one can be examined and possibly modified. Antibiotics are produced industrially and economically by the process of fermentation, where the source of microorganism is grown in large containers called fermentor (100,000-150,000 liters or more) containing a liquid growth medium [17-40]. In that production process we have to take care of different parameters like Oxygen concentration, temperature, pH and nutrient levels with closely monitored and adjusted if necessary. We know that antibiotics are secondary metabolites; the population size must be controlled very carefully to ensure that maximum yield is obtained before the cells starts die [41,42]. Once the process is completed, the antibiotics must be extracted and purified to a crystalline product. This is simpler to achieve if the antibiotic is soluble on organic solvent. Otherwise it must be first removed by upstream processing like ion exchange, adsorption and chemical precipitations [43-48].

Streptomyces griseus and rest of streptomyces genus together produce over half of the world’s antibiotics. Because of this, they are invaluable in the medical field. Streptomycin produces a wide spectrum of antibiotics as well as antifungal. They also produce other bioactive compounds like immunospperesents, which prevent immune system activity.

For the sub culturing of streptomyces strain MTCC 4734

After maintaining the entire composition, the mouth of the conical flask was closed by the use of cotton plug, brown paper and tightened with the elastic band. After that, it was autoclaved at 15psi. Petri dishes and micro tip was also wrapped and autoclaved. When the autoclave was over, i it into taken out and kept in the laminar air flow. Before keeping it, the laminar air flow hood was cleaned by the use of dehydrated alcohol and left for 10min with the ultraviolet radiation. The wrapped paper was opened and the entire thing was left to get cooled and then the autoclaved media transferred into the Petri disk and was left to solidify. 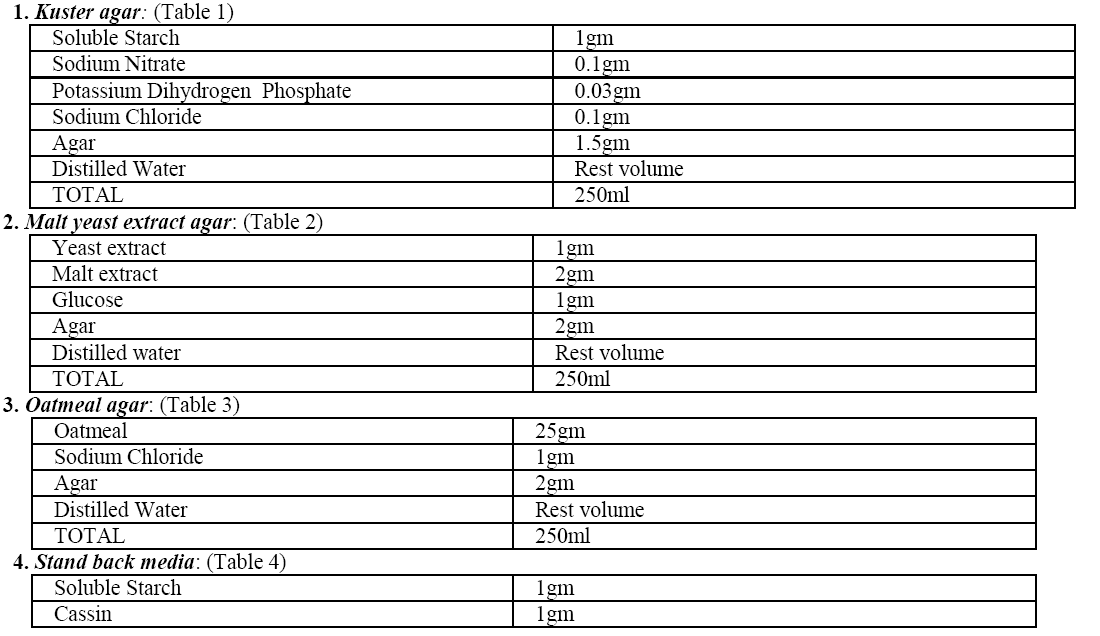 When the media had solidified, the ampoule of strain was break opened. The microorganism are present in lyophilized state for this purpose, we are using saline water and mixed it well with the help of micropipette and transferred it into the medium, which we had taken then incubated it into the incubator at 400C for 8 days. The colony comes out then it goes for further use [49,50].

Composition of the medium

After increasing the population of microorganisms, fermentation was done .We know that there are two types of fermentation, first one is solid state and the second one, is submerged fermentation.

For the production of antibiotics, we had gone for the submerged fermentation. The substrate used for the fermentation process is medium:-1, medium:-2 and medium:-3.

The process is explained as follows: Inoculation of streptomyces on the fermentation medium .Before that, we have done the autoclave to make the medium contamination free .When the medium was ready inoculation was done.

After 24hr, 10ml sample from each of the medium was taken for the analysis .Color of the medium was also expected to change slightly. The sample which we have taken for analysis was centrifuged at 10000RPM for 15min at 40C.After centrifugation was over; the supernatant was taken without disturbing it and store it at 40C for further processing.

This step was repeated for 48hr, 72hr and 96hr.The process of fermentation was done two times by using same procedure.

To get crude antibiotics we had gone for the downstream processing .The techniques we have to use in this work is:

Column chromatography is a separation technique in which the stationary bed is within a tube. The particles of the solid stationary phase or the support coated with a liquid stationary phase may fill the whole inside volume of the tube (packed column) or be concentrated on or along the inside tube wall leaving an open, unrestricted path for the mobile phase in the middle part of the tube (open tubular column). Differences in rates of movement through the medium are calculated to different retention times of the sample

The sample was loaded on the silica plate and kept it in a in 1:1 of butanol and acetone for capillary raise after the raising of sample in a plate is over, the length of sample raised was noted and the plate was dried. After drying the plate, band was obtained on the plate, the reading was taken. The plate was sprayed with Ninhydrin solution. The property of this solution is that it forms a pink color spot where amine group has been found. Then take the individual reading and check the TLC value of each collected sample.

The same procedure was repeated for the entire collected sample.

3. Take the reading after 24hr

For the preparation of medium, 7.5gm of mullar hinton agar was dissolved in 200ml of distilled water and autoclaved. This medium was distributed into the 16 Petri dishes equally and left to solidify. After solidification, holes in the medium were made for sample loading. Around the holes, streaking of different diseases containing microbial species like vibrio cholerae, salmonella Enterobacteria etc.

After the streaking of microbial spp. different collected sample were loaded into those holes and kept it for incubation at normal room temperature.

After 24hr, the reading of inhibition zone was taken, which are present in table. Again all the steps was repeated and data was collected. 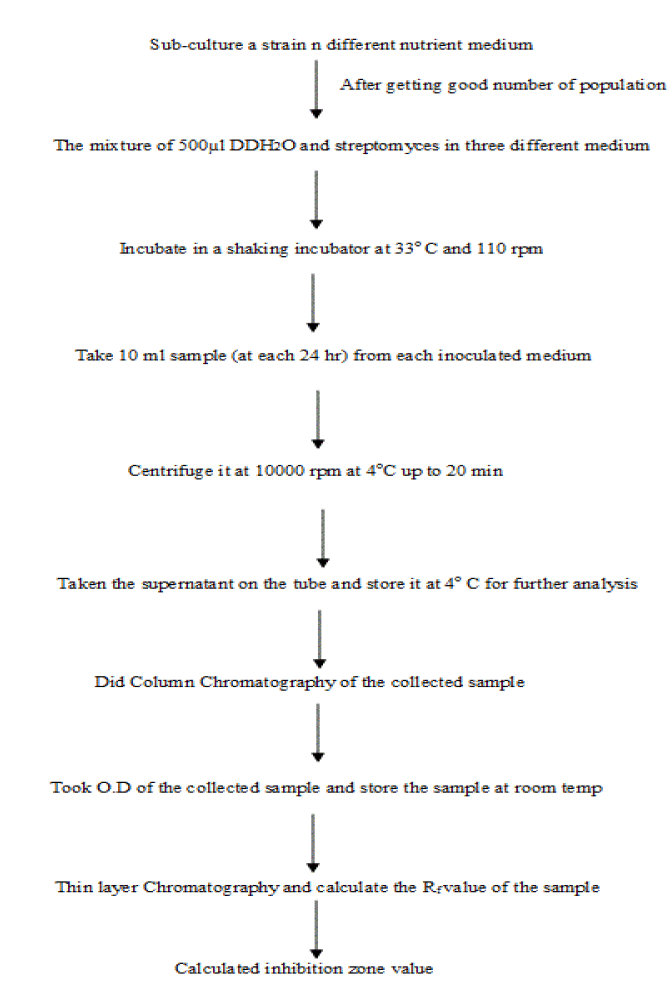 The results shown by the work are explained below

4. Photographs of medium which color changes due to fermentation

6. Photographs of TLC and Column chromatography

Figure 2: A. filling of column by silica gel. B. Separation of antibiotic by column chromatography. 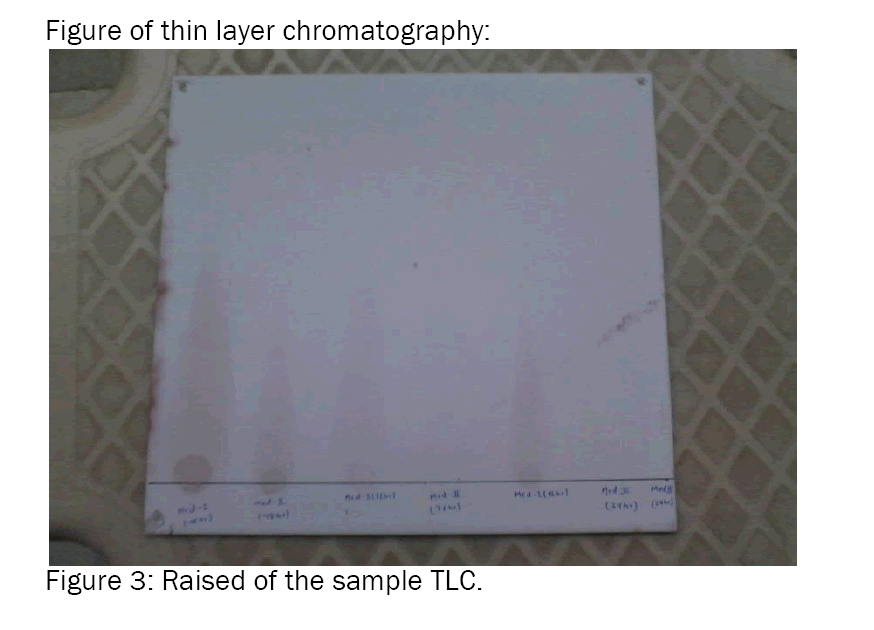 Figure 3: Raised of the sample TLC. 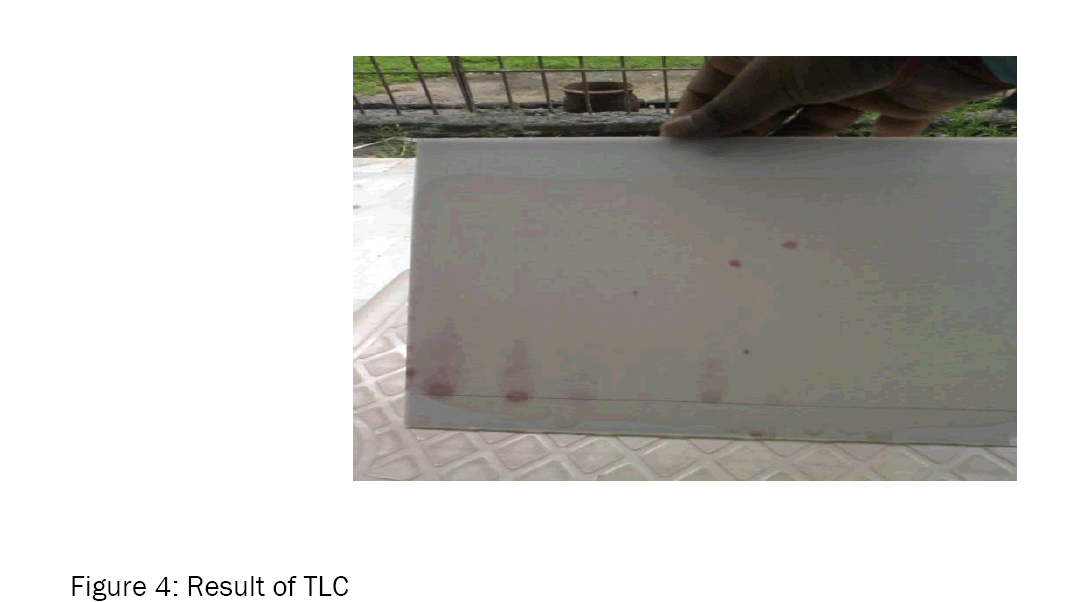 The TLC-value is the ratio of length of solvent raise to the length of sample raise. 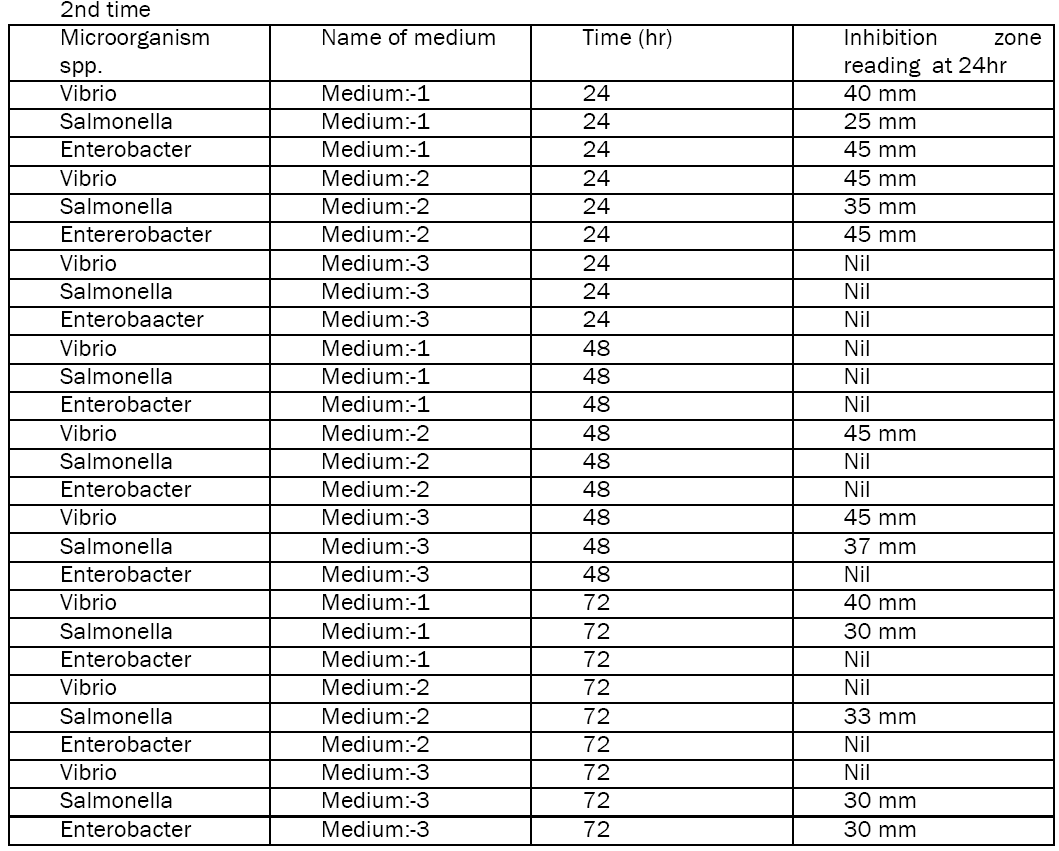 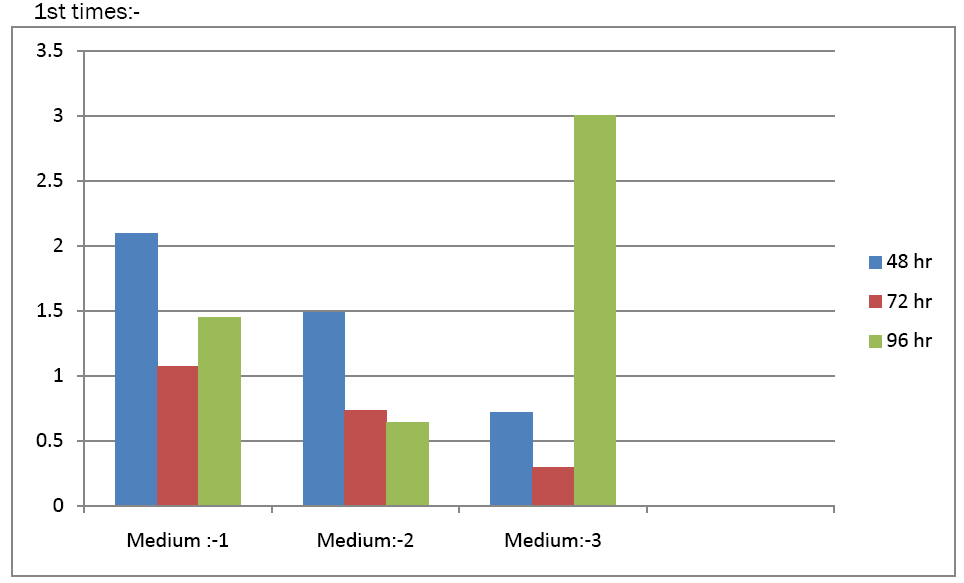 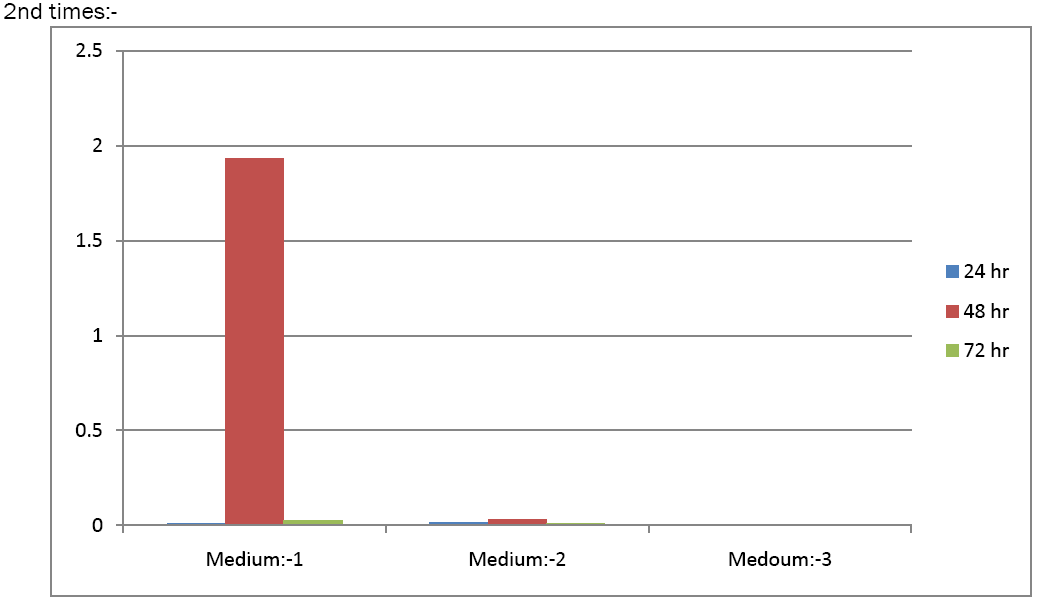 An attempt has been made to investigate to produce antibiotics from streptomyces spp during study period May 2014 in our study we have found 2.097 optical density at 48hr by medium:-1 and we got lowest optical density value 0.291 at 48 hr by medium:-3 and then experiment was repeated for one more time again we got highest density value at medium:-2 at 24hr (1.428 O.D) and we observe lowest value of medium:-3 at 24 hr 2.592 O.D and we were perform antimicrobial activity of antibiotic produced from streptomyces spp.

An attempt has been made to isolate antibiotic compounds using streptomyces griseous spp. from MTCC 4734using three different substrates by submerged fermentation .In our study these antibiotics were observed to be highly effective against pathogenic forms like vibrio, salmonella and Enterobacter etc. In future we have to characterize this compounds using NMR, LCMS .This study indicates the above organisms are producing bio active compounds.