This study was carried out to assess the nutritional and organoleptic properties of “Wara” - local cheese prepared by addition of some selected coagulants. All experiments were carried out under standard laboratory conditions. The following properties were determined: fat, protein, moisture content, carbohydrate, calcium, Ash, general appearance, texture, color and taste. These were analyzed based on the various coagulants used. Three variants of cheese were made using three natural coagulants which include Calotropis procera (CC), Moringa oleifera (MC) and lemon juice (LC). These were further divided into two based on the quantity of coagulant used, each making a total of six subdivisions; LC1, LC2, MC1, MC2, CC1 and CC2. It was observed that the organoleptic properties such as, texture, colour, taste and general appearance were affected by the quantity of each coagulant added to each of the samples. The results of the proximate analysis showed differences in fat, protein, moisture content, carbohydrate, ash and calcium contents of the different samples prepared. From the results obtained, it can be concluded that Moringa oleifera and Calotropis procera are promising and generally desirable local coagulants in cheese processing.

Cheese is made in almost every country in the world with the existence of more than 2,000 varieties [1]. It provides an ideal medium for preservation of valuable nutrients in milk and is an excellent source of protein, fat, minerals, vitamins, and essential amino acids. The ingredients used for cheese processing are milk, starter, and coagulants [2]. The general steps of cheese manufacturing involve heat treatment of milk, addition of starter or coagulant, and removal of whey. Slight changes are, however, made from time to time depending on the variety of the cheese [1,3]. Cheese is a solid milk product from the milk of goat, cow, sheep and other mammals by curdling the milk using a combination of rennet and acidification [4]. Cheese production is common to households in many developing countries, which provides a useful service in increasing the shelf-life of valuable human food- stuff like milk [5].

In Nigeria, milk production is mainly done by the Fulani nomadic people, who are pastoralists involved in the rearing of cattle, moving from one location to another in search of green pasture. Due to lack of refrigeration facilities, the Fulani women process the surplus fresh milk into a soft, unripen cheese called “warankasi” or “wara” in short term. The wara cheese is widely consumed at home and sold in the market in South-western Nigeria. The cheese is usually stored in a mixture of whey at room temperature (28ºC). Under these storage conditions, wara is highly perishable and has a shelf life of 2-3 days.

One of the modern technologies employed in the curdling of milk is the use of commercial preparations of lactic acid bacterial cultures and milk coagulants, which are usually imported. Production of lactic acid by the starter flora during manufacture of cheese results in a decrease in the pH of milk and this, in combination with cooking and stirring, promotes syneresis of the curd and expulsion of whey [6]. The coagulants used for wara processing include the leaves and stem extracts of Sodom apple (Calotoropis procera), lemon juice and Moringa olifera. The Moringa olifera extract is preferred over the extracts of pawpaw and Sodom apple because moringa olifera processed cheese has a sweeter flavour compared to the cheese processed with pawpaw leaf extracts [1]. Moringa olifera is one of the world’s most useful plants; it is cultivated in all countries of the tropics for its leaves, fruits and root and for a variety of food and medicinal purposes [7]. The immature green pods are probably the most valued and widely used of all its parts as it contains all the essential amino acids. The tree has been advocated as an outstanding indigenous source of highly digestible protein, calcium, Vitamin C and carotenoids which is suitable for utilization in many developing regions of the world. It provides an ideal medium for preservation of valuable nutrients in milk and is an excellent source of protein, fat, minerals, vitamins, and essential amino acids [3, 8].

Raw milk easily becomes sour when it is stored for a long period at high ambient temperatures prevalent in tropical and subtropical countries. This is because the inherent lactic acid bacteria and contaminating microorganisms from storage vessels or the environment break down the lactose in milk into lactic acid. High storage temperatures result in faster microbial growth and hence faster milk spoilage.

The treatment of any fluid with the common inorganic coagulants has some certain disadvantages among which are the cost of chemicals (especially for developing nations). Aluminum Sulfate is the most commonly used coagulant in the developing countries. Studies have linked it to the development of neurological diseases (e.g. pre-senile dementia or Alzheimer’s disease) due to the presence of aluminum ions in the drinking water [9].

Cheese is nutritionally important to the body. It also helps in reducing the quantity of raw milk wastage, because the milk which would have been lost as a result of the spoilage is converted to cheese. Also, the artificial coagulants that are used in the preparation of cheese (wara) have been linked to some diseases, thus the need to investigate some natural coagulants as a means of obtaining safe and healthy cheese.

One liter of fresh cow milk was put in a pot and 2.5 ml of calotropis extract juice was added. The contents in the pot were allowed to boil for about 30 - 40 minutes at 100ºC. The mixture was stirred continuously on the fire until it coagulated and the curd had separated from the whey. The pot was removed from heat and the curd and whey were poured into the raffia basket to drain the cheese for about 5 – 8 mins to give it its desired shape. The produced cheese was labeled sample CC1. Another sample CC2 was also produced with the addition of 5ml of calotropis extract juice instead of the 2.5 ml that was added in sample CC1 (Plate 1).

50 g of dry moringa oleifera seeds was ground and soaked in 0.4 litres of water. The resulting solution was allowed to stand for an hour. One litre of fresh cow milk was heated in a pot at 100ºC. 75 ml of Moringa Oleifera seed solution was added to the warmed milk. The resulting mixture was left on the fire (low heat) for 30 minutes until it coagulated. The produced cheese was labeled sample MC1. Another sample MC2 was also produced with the addition of 100 ml of Moringa oleifera seed solution instead of the 75 ml that was added in sample MC1 (Plate 2).

Ten strains of lemon fruits were squeezed and sieved with filter cloth to obtain lemon juice. One litre of milk was poured into a pot, placed on low heat and allowed to heat for about 40 mins. 50 ml of lemon juice was added to the milk and left to continue heating. Continuous stirring was done until the mixture coagulated and was visible to separate curd from whey. The pot was removed from heat and the curd and whey were poured into a raffia basket which drained the whey off the cheese and gave it its shape. The produced cheese was labeled sample LC1. Another sample LC2 was also produced with the addition of 100 ml of lemon juice instead of the 50 ml that was added in sample LC1 (Plate 3).

Questionnaire was prepared for the assessment of organoleptic properties of the “wara” samples. The responses obtained from people after tasting each sample was taken so as to know their preference for the sample on an average. This was achieved using descriptive statistics.

The comparison of mean responses of these samples was done using the tool; Analysis of Variance (ANOVA), and the significant mean comparison were separated with Duncan Multiple Range test (DMRT). These tools were used because the mean of more than two groups (six samples) were to be compared.

The results obtained are as presented in Tables 1 and 2

The results of the proximate analysis showed differences in fat, protein, moisture, carbohydrate, ash and calcium contents of Calotropis procera, Moringa oleifera and Lemon Juice coagulated cheeses. Out of the six samples prepared, Calotropis procera yielded highest value (64.50%) of fat content, which is higher than the value (31.45%) reported by [11,9]. Therefore, Calotropis Cheese has highest fat content reading (64.50%) compared with Moringa oleifera and Lemon Cheese. The higher fat content in Calotropis Procera cheese could be as a result of its high coagulating strength.

The composition of protein in this work was similar to the one obtained by [12] but lower than the value (45.3%) reported by Johnson [9]. The moisture content of lemon cheese (63.92%) was higher than that of Calotropis procera and moringa cheese, this may be due to the higher coagulating strength of Calotropis procera and Moringa oleifera. Higher moisture content could favour the growth and proliferation of microorganisms as reported by [3], thus reducing the shelf-life of cheese. The carbohydrate content (13.41%) of Moringa cheese was the highest. Also, increasing the quantity of each coagulant added to the milk, there was a resulting decrease in carbohydrate content of the cheese. For calcium content, calotropis procera coagulated cheese has the highest value (32.14%), followed moringa coagulated cheese, and lemon juice coagulated cheese has the least. It was also discovered that the calcium content of the cheese samples remained constant with increase in quantity of each coagulant added (Table 1). The values of ash content obtained from the six cheese samples are very close to each other, but Calotropis procera coagulated cheese has the highest value (3.50%).

However, Moringa and Calotropis procera coagulated cheeses are preferred as discovered from respondents to Questionnaire Assessment and their nutritional values such as fat, protein, moisture content, calcium and carbohydrate. The lemon juice coagulated cheese was sour to taste. This is due to the Citric Acid present in the lemon juice, though, it is a natural preservative used in foods.

The following are the organoleptic properties of the local cheese samples that were assessed: 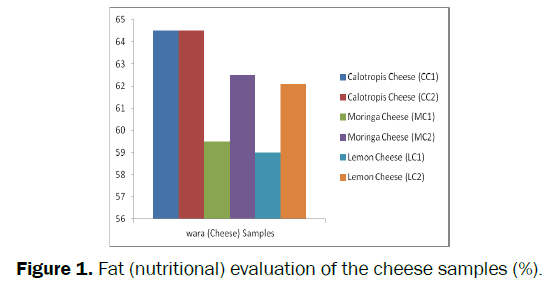 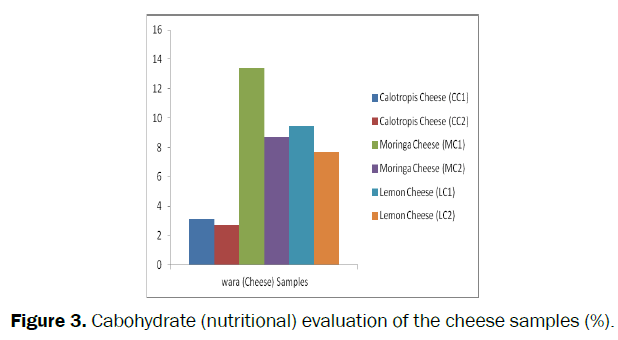 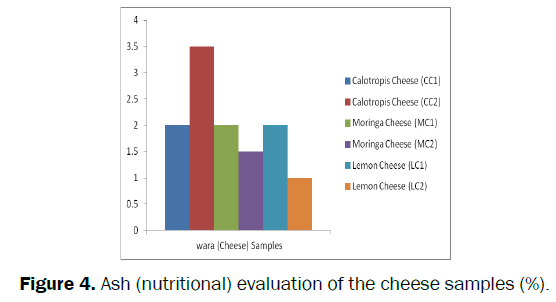 Table 2: Results of questionnaire on the organoleptic assessments.

Also, from the results shown on Table 1 and Figures 1 to 6, it was discovered that each coagulant added to the cheese samples, with their corresponding volumes has effects on the nutritional and organoleptic properties.

The comparative study of the nutritional and organoleptic properties of the varieties of cheese produced with fruit juice and seed extracts of the three plants, suggested and confirmed that Moringa oleifera and calotropis procera were promising and generally desirable local coagulants in cheese processing. From this study it was observed that the nutritional and organoleptic properties of the cheese based on the type and quantity of coagulant added varies slightly from each other.