Lactic acid bacteria (LAB) being probiotics act as starter cultures in a variety of traditional food preparations. They possess the capability to produce antimicrobial compounds such as hydrogen peroxide, diacetyl, organic acids and bacteriocins. Bacteriocins in recent years have gained interest as a natural preservative in the production of food to enhance shelf life. The present study aims to isolate lactic acid bacteria with bacteriocin producing capability, from piyush and aagal. 10 samples of piyush & 10 aagal samples from different areas in and around Mumbai were screened for the presence of lactic acid bacteria. Bacteriocin producing LAB was isolated from Piyush. The isolate was found to be a Gram positive cocco bacillus, oxidase positive and catalase negative. The cell free supernatant of the isolate showed antimicrobial activity against the common food borne pathogens S.aureus, S.typhi, E.coli, K.pneumoniae, C.sakazakii, Pseudomonas and L.plantarum. It showed highest activity against the food pathogen Cronobacter sakazakii. The bacteriocin was precipitated using 1N HCl. It was found to be stable at 100ºC for 60 min and its activity was highest under acidic conditions. It was affected by proteolytic enzyme (trypsin). The bacteriocin was able to reduce the growth of pathogens when applied to food product (pedha). Further study of bacteriocin may be carried out to explore the possibility of its use as a food bio preservative for enhancing the shelf life of food products.

In 2013, 818 food borne disease outbreaks were reported, resulting in 13,360 illnesses, 1,062 hospitalizations, 16 deaths, and 14 food recalls. The investigations showed the cause of these outbreaks included food pathogens like Salmonella, Shigella, E. coli, V. cholerae, and Listeria [1]. Food borne infections are common public health problems which result from the presence of microbes or microbial toxin or indigenous toxic substances that contaminate the food. A variety of chemical and physical preservation techniques have been used to reduce food spoilage and to increase the shelf life of the food product. In spite of the availability of these methods, preservation of food is yet of great public concern as these methods makes the foods unsafe for human consumption.

In recent years there is an increasing trend to use biopreservatives in the form of protective cultures or their metabolites, i.e., enzymes and bacteriocins. Biopreservation refers to the use of antagonistic microorganisms or their metabolites to inhibit or destroy undesirable organisms in foods. LAB have been exploited for years for the production of fermented foods due to their ability to produce desirable change in taste, flavor and texture as well as inhibit pathogenic and spoilage microorganisms  [2]. They are widely distributed in different ecosystems and are commonly found in foods (dairy products, fermented meats and vegetables, sourdough, beverages), sewage, on plants and also in the genital, intestinal and respiratory tracts of man and animals [3]. LAB are generally considered beneficial microorganisms, with some strains even considered to promote good health (probiotic), and their extensive historical use contributes to their acceptance as being GRAS (generally recognized as safe) for human consumption [4]. A number of different factors have been identified to contribute to the antimicrobial activity of LAB. These bacteria produce different antimicrobials such as lactic acid, hydrogen peroxide, carbon dioxide, acetic acid and bacteriocins, which can inhibit pathogenic and spoilage microorganisms enhancing shelf life [2].

Bacteriocins are peptides released by bacteria which have bacteriostatic or bactericidal activity against related or unrelated organisms. The application of bacteriocin in food industries can extend shelf life of foods. It provides extra protection during temperature abuse conditions, decrease the risk for transmission of food-borne pathogens through the food chain, reduce the economic losses due to food spoilage, reduce the application of chemical preservatives, and permit the application of less severe heat treatments without compromising food safety. Bacteriocins also enhance the preservation of food nutrients and vitamins, as well as organoleptic properties of foods and permit the marketing of novel types of foods. The most prominent Class I bacteriocin, Nisin is the only one internationally accepted as food biopreservative in certain industrial applications. Recently, pedocin is also another commercially available bacteriocin preparation for food applications and the present studies foresee that the count of these preparations would drastically increase in the near future [5].

Studies show that Lactic Acid Bacteria possess the ability to produce bacteriocins. Bacteriocins can be used as a food preservative. LAB being a probiotic can be inoculated along with bacteriocin in the foods. This study will help in isolation of LAB with greater antimicrobial activity and thus the production of novel bacteriocin. The results of this study will be a boon to the food industries in the area of food preservation. Thus the objective of the study was to isolate LAB producing bacteriocin from Piyush and Aagal (Kokum concentrate), indigenously used food products of Maharashtra.

The study was carried out in the Department of Food Science & Nutrition at SNDT Women’s University, Juhu.10 Piyush samples were procured from different places of Mumbai and 10 samples of Aagal were collected from different locations around the western region of Maharashtra. The samples were kept at refrigerated temperature until analysis.

The samples were serially diluted using sterile saline and then plated on to respective media by pour plate method. The results for total plate count were recorded after incubation of 24 hrs at 37ºC whereas the LAB count and total yeast mold count were recorded after 48 hrs of incubation at room temperature. The isolated LAB would be grown in MRS broth under anaerobic conditions [6].

Antimicrobial assay was carried using well diffusion method [7]. In well diffusion assay, wells were prepared on Mueller Hinton agar using a sterile cork borer. The test organisms were streaked across the well and the antimicrobial assay was carried out. The test organisms used were S. aureus, E. coli, Bacillus, Klebsiella, Pseudomonas, Cronobacter sakazakii and S. typhi. The wells were loaded with 0.1 ml of cell free supernatant (CFS). The antibacterial activity was measured in terms of zone of inhibition [7]. Antimicrobial assay of L.plantarum ATCC 8014 was spectrophotometerically determined at 600 nm [8].

The cell free supernatant produced was treated with solid ammonium sulphate with 90% saturation. The mixture was stirred for 2h and kept at 4ºC. Then it was centrifuged at 2500 rpm for 15 minutes. The precipitates were re-suspended in 25 ml of 0.05 M phosphate buffer (pH 7.0). Assay of the bacteriocin activity was carried out in both the precipitate and supernatant to know which one actually contains the bacteriocin.

The cell free supernatant was mixed with Trichloroacetic acid for precipitation. The mixture was centrifuged at 13,000 rpm for 10 minutes after which the supernatant was decanted. The resulting pellet was dissolved in phosphate buffer.

Measurement of zones of inhibition

The cell free supernatant was added to the wells on the agar seeded with S.aureus, E.coli, S.typhi, K.pneumoniae and the zones of inhibition were measured [7] (Table 1).

Effect of temperature, pH and enzyme on the bacteriocin

5g of Pedha was inoculated in 50ml of buffered peptone water. This was inoculated with 106 cells/ml of S. aureus. The test bacteriocin was then added to observe the effect of bacteriocin on S. aureus in pedha. This was serially diluted up to 10-4 dilution and were plated on plate count agar and incubated at 37ºC for 24hrs. The colony count was recorded and compared with the control (without bacteriocin) [10].

Gram staining, catalase & oxidase tests were carried out for the isolate. 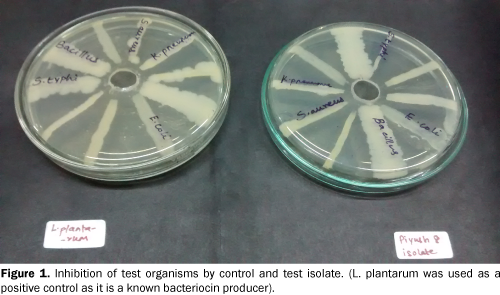 Figure 1: Inhibition of test organisms by control and test isolate. (L. plantarum was used as a positive control as it is a known bacteriocin producer).

Measurement of the zones of inhibition

Concentration of bacteriocin by precipitation

Bacteriocin precipitation was achieved through acid precipitation by using 1N HCl. The supernatant showed antimicrobial activity and the precipitate did not showed activity. This showed that the isolated bacteriocin is peptide in nature.

Effect of temperature, pH and enzyme on the isolated bacteriocin

The isolated bacteriocin was found to be stable at 100ºC for 60 min. It was also observed that when CFS was heated for more than 40 min; its activity against K.pneumoniae was decreased. The cell free supernatant of the isolate was found to be active under acidic conditions since the inhibition was observed at pH 1 to 4 and not at pH 5, 9, and 11. The antibacterial activity of bacteriocin from the isolate was completely inhibited by proteolytic enzyme trypsin at concentration of 2000 u/g indicating that isolated bacteriocin is proteinaceous in nature.

The preservative effect of partially purified bacteriocin was observed (Table 2). There was a reduction in the total bacterial count in the sample treated with bacteriocin compared to that with the control (without bacteriocin).

Table 2: Microbiological and biochemical characteristics of the P8 isolate.

Bacteriocins from Lactic acid bacteria are been used as a bio preservative because of their antimicrobial and heat stable nature. In the present study, lactic acid bacteria were isolated from piyush and aagal. The isolation of LAB from aagal was difficult may be due to its innate antimicrobial properties. Sutar et al. has reported that the antimicrobial activity in kokum extracts was due to presence of furfural [11]. But LAB was isolated from the fruit, juice and phyllosphere of Kokum [12].

Bacteriocin from piyush was isolated with wide spectrum of activity showing largest zone of inhibition against the food pathogen C. sakazakii. Even though the bacteriocin inhibited S. aureus, it failed to inhibit Bacillus. Gupta and Tiwari [13] reported that plantaricin LD1 showed a broad spectrum activity that inhibited both Gram-positive and Gram-negative bacteria including food-borne pathogens [13]. Agaliya and Jeevaratnam isolated 8 strains of LAB from idli batter which showed maximum zone of inhibition against other LAB and various Gram positive and Gram negative pathogens [14]. The bacteriocin was precipitated using 1N HCl whereas Ogunbanwo et al., carried out the bacteriocin precipitation through ammonium sulphate and TCA precipitation. The specific activity increased to 85.3 and 44.4 AU/g protein for L. plantarum F1 and L. brevis OG1 respectively [7].

The effect of heat and pH were studied on the isolated bacteriocin. It was stable up to 100°C for 60 min and found to be pH dependent (pH 1 to 4). The bacteriocin produced by L. brevis OG1 was found to be stable at temperature 121°C for 60 min & at pH 2 to 8, while for L. plantarum F1, it was found to be heat stable at 121°C up to 90 min and at pH 2 to 6 [7].The bacteriocin isolated from piyush lost its activity when treated with enzyme trypsin. The antimicrobial activity of the bacteriocin produced by L. brevis OG1 and L. plantarum F1 was lost when treated with proteolytic enzymes [7].

The bacterial counts with bacteriocin (3.94 × 104 cfu/gm) when compared to those with S.aureus (7.06 × 104 cfu/gm ) and the normal flora of pedha (4.84 × 104 cfu/gm), there was a reduction in the count. This showed that the bacteriocin can be a potential food preservative. Chopra et al., carried a similar experiment with sonorensin coated packaging films. It was observed that the spoilage of meat samples occurred in control films whereas no spoilage was observed in sonorensin packaged samples [15]. The microbial counts drastically decreased when treated with partially purified bacteriocin from isolate KN02, in milk and edible button mushrooms [10].