Musa acuminata also known as red banana is a type of banana which is cultivated mostly in the south East Asia. About 6.4 billion pounds of people consume banana every year and the production of banana is about 145 million tons by 2011. The peels of this banana form about 18-33% of the whole fruit and go as waste and are not used for any other purpose other than for feedstock. With a view to exploiting banana peel as a source of valuable product musa acuminate peel’s nutritive properties are analyzed. In this project the nutrient contents of the peel has been analyzed in the form of dried powdered. The estimation such as carbohydrates, protein, fat, minerals and fibre using various chemical methods and also with soxhlet apparatus for fiber has been found. The major use of banana is as a flavor, by using these values we can design several products with this peel as a major ingredient. The end users are common people like us and this will help in providing them nutrition in natural way. This will also reduce the amount of waste that is produced by this fruit and it also helps in producing healthy foods from wastes.

Bananas are the most tropical fruits in the world market. India being the largest producer of banana produces about 39000 tons [1]. There are several products available from banana such as chips, powder, biscuits, pulp etc. but the peel of the banana go as waste and is not used for any other purposes than as a feed for livestock. Thus it is important to find applications to use these peels effectively. The major ingredient that is obtained during the processing of various fruits is its peel. There are vide variety of bananas and we concentrated on Musa acuminata peel and did nutritive analysis on it. There is no previous work that has been done in this Musa acuminate peel but there are studies in other variety of banana peels. Various studied shows that banana peels have beneficial effect on human health hence by assuming that we started to experiment on this Musa acuminate peel [2-4]. On experimenting we found that these peel are rich in dietary fiber, protein, minerals like sodium and potassium, fat, starch and reducing sugars. Information is available about the medicinal benefits but there is no information about the nutritional composition of Musa acuminate peel. In this project, nutritional composition of Musa acuminate peel had analyzed [5].

Musa acuminate was bought from an agriculturist at Erode in Tamil Nadu. The peel of the fruit has been separated, washed with distilled water and is dried at 2 different temperatures at 60°C and 100°C. They are then made into powder form using lab grinder for making it easier to analyze nutritive property by chemical method [6]. Then the sample is kept in desiccator which has silica gel at its bottom. The sample is diluted and centrifuged to collect the supernatant for few experiments like measurement of reducing sugars.

Reducing sugars were established by dinitrosalicylic acid method. About 0.5 ml of the supernatant of the sample was taken by extracting with 80% ethanol. It is then evaporated on water bath at 80°C and about 10 ml of water is added to dissolve the sugars. And 0.5 ml of the extract is taken and equalized its volume to 5 ml with water and 3 ml of DNS (Dinitrosalicylic) reagent is added and heated for 5 minute. While the contents are in warm condition about 1 ml of 40% Rochelle salt solution is added. Then the solution is cooled and the intensity was measured at 540 nm in spectrophoto meter (Figure 1). By plotting the graph for concentration and optical density (OD) at 540 nm it was found that both the samples of 60°C and 100°C contain 80 mg per 100 g of sample. 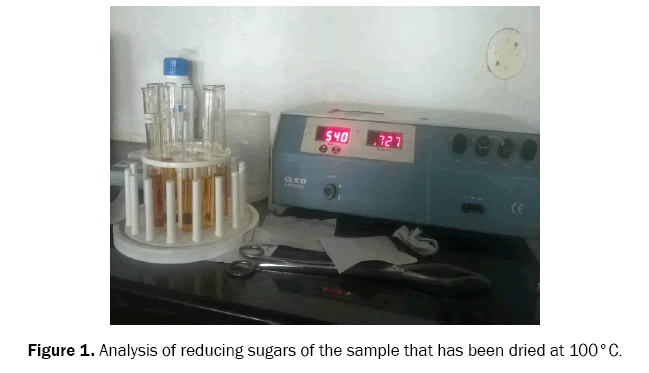 Figure 1: Analysis of reducing sugars of the sample that has been dried at 100°C.

Starch is extracted with per chloric acid in hot acid medium. It is hydrolyzed and dehydrated to hydroxyl methyl furfural by concentrated sulphuric acid. This compound forms green colored product with anthrone which has absorption at 620 nm. For starch estimation about 0.2 g of the sample was taken from both the temperature. Once the reading has been noted, graph was plotted between OD at 620 nm vs. concentration of glucose. It is found that 60°C dried sample contains 3.06 g per 100 g of the sample and 100°C dried sample has 2.40 g per 100 g of the sample.

Protein was estimated by kjeldahl method. Food is heated and catlytically digested and protein in it is decomposed into ammonia, which reacts with sulfuric acid into ammonium sulfate. The ammonia is releases by distilling the ammonium sulfate in alkali solution, absorbed in boric acid and then titrated with standard sulfuric acid solution. The content of protien is generated by multipying the volume of titrant by the conversion factor.Then the amount of protein present in the sample was calculated. It was found that 60°C and 100°C dried sample contains 8.50 g per 100 g of sample.

The most widely used method is based on the fact that minerals are not destroyed by heating and they have less volatility compared to other food components. Here the acid insoluble ash was measured as the amount of ash that is insoluble to dilute hydrochloric acid. For this method 0.5 g of each sample was taken and the total ash was first found and then 10% HCL was added to the crucible containing the total ash and is covered with watch glass. It is then boiled for 5 minute and the watch glass is gently rinsed with 5ml of hot water and is added to the crucible. The insoluble matter was collected in the filter paper and is dried, cooled in the desiccator for about 30 min and weighed to calculate the acid insoluble ash (Figure 2). It was found that 100 g of 60°C dried sample contains 20 g and 100°C dried sample has 24 g of acid insoluble ash per 100 g. 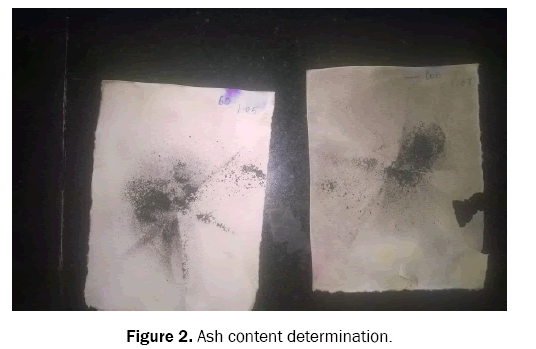 Crude fiber consists largely of cellulose ang lignin (97%) with some mineral matters. During the acid and subsequent alkali treatment, oxidative hydrolytic degradation of the native cellulose and considerable degradation of lignin occurs. The residue obtained after final fiteration is weighed, incinerated, cooled and weighed again. The loss in weight gives the crude fiber content. Percentage of crude fiber in sample is calculated by diving the loss in weight on ignition by weight of the sample and multiply this with 100. It was found that 60°C dried sample contains 10 g per 100 g of sample and 100°C dried sample has 10.5 g per 100 g of sample [7].

It is found that this Musa acuminate contains high fiber, protein and acid insoluble ash when compared to other variety of bananas.

Several different sources are becoming waste in these days and banana peel is also one of the major wastes in our country. From this paper it is evident that the banana peel consists of lot of nutrition needed for humans. By using this peel, we can design a lot of products with minimum nutritional value or it can also be used as an ingredient in designing a product from this. And also by extracting a particular component it can be used as additives such as carotene. These carotene from red banana peel can act as a anticancering agent. Banana peel helps in whitening the teeth when it is chewed because of the presence of polysaccharides (starch). Among all other varieties of banana peel, Musa acuminate peel shows high nutritive value. From this it can be concluded that the banana peel are not a waste. It is a healthy source which is not used properly.